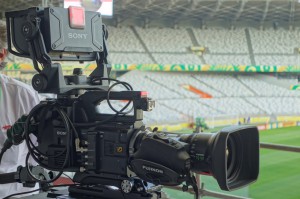 FIFA will use Sony’s professional 4K equipment within its 4K live production workflow processes to film one match from the round of 16 (to be held on 28 June), one quarter-final (on 4 July), and the final (on 13 July) at the Estadio do Maracanã) in Rio de Janeiro. Sony will be providing extensive technical support to FIFA, including the development of a 4K live production system.

At Sony’s commercial display booths located within some of the 2014 FIFA World Cup stadia and at the FIFA-hosted HD public viewing FIFA Fan Fest events to be held in Brazil, visitors will be able to enjoy Official 4K Film promotional trailers produced in 4K/60P with match action. Around the world, viewers will also be able to see the 4K/60P promotional trailers for the Official 4K Film on 4K-compatible BRAVIA TVs at Sony showrooms and retail outlets including Sony Stores.

Soichi Kawachi, VP in charge of FIFA Partnership at Sony said, “We are very excited to offer an entirely new viewing experience at the greatest sport event in the world, the FIFA World Cup. By leveraging our cutting-edge 4K technology and our premier products and solutions through our partnership with FIFA, we will deliver a unique and totally compelling entertainment experience conveying the excitement of the matches in Brazil with the depth and vividness that the ultra-high definition of 4K delivers.”

“FIFA has a proud track record in embracing innovation at our flagship competition, to make sure that football fans around the world receive the very best in match coverage and experience,” said FIFA Director of TV Niclas Ericson. “We are excited by the prospect of working with Sony to incorporate 4K technology in our production plans. 4K will propel fans around the globe into a whole new viewing dimension and it marks the dawning of a new era in the broadcasting of sport.”