As IBC gets underway in Amsterdam, Sony has unveiled a new, cost-effective line of production switchers; the MVS-3000, MVS-6520 and MVS-6530. 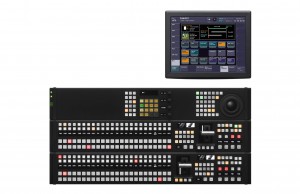 Sony’s MVS8000X is one of the highest end switchers in the production industry. Looking to make the power and features of it available to a broader audience, the company is rolling out these three new production switchers at a lower price point. The MVS-3000, MVS-6520 and MVS-6530 models all feature multi-format support, multi-viewer output and a menu panel control.

‘What we’ve basically done is taken the MVS8000X and boiled it down, if you will,” says Dana Goodwin, senior sales support engineer, switchers at Sony Electronics. “It’s still the same software, the same operating systems with a few minor upgrades. One of the challenges we face with our big switcher is all of the options and the need for someone to configure it. What we’re trying to do here is reduce the number of options and get it down to just one or two model numbers that you buy. Hopefully we can sell it a lot easier this way into more markets.

Ranging from $40,000 to $110,000, the three new switchers are some of the lowest-priced switchers the company has offered, yet still carry the features of its most elite product.

“We’ve been making switchers for 20-30 years and doing really well in the live productions news and sports markets,” says Mark Bonifacio, senior marketing manager, content creation and workflow solutions at Sony Electronics. “With these switchers we are tacking down the bottom end of the market that we really didn’t play in. These are ideal for the regional sports networks and college broadcasts. It’s most of the power of the big guys but if you can work with the restrictions of minimal inputs, which you probably can on a smaller college level broadcast, you get all the power of a high-end switcher.”

Aside from offering a more affordable option, Goodwin sees the new line of switchers as an opportunity to streamline the training process for users of Sony switchers.

According to Glenn Hill, senior engineering product manager at Sony Electronics, the new line was developed in response to a growing trend in the industry for a switcher that simply takes up less real estate.

“We’re seeing even some of the big broadcasters are putting in smaller production control rooms for specific things that they want to do and they just really don’t want to spend the money especially on things like 3G. It’s funny that the industry is moving to the smaller switchers because we as manufacturers did it to ourselves; we’re giving you way more in one ME than we ever have before. Now the users are thinking ‘well I don’t need to have such a big switcher anymore.’”

MVS-3000
Designed for production studios, stadiums, and OB vehicles, the MVS-3000’s capabilities include two mix effects (M/Es), four keyers per M/E, each with the MVS high-performance chromakey, 2.5D resizers, and color correction. The self-contained 4RU processor with dual multi-viewer output that splits into 4 frames or 10 frames offers simple configuration, and fits for small production facilities that have limited installation space.

The MVS-3000 has 8 keyers allowing sophisticated layering from each M/E. Separate from the main fader, each keyer has its own auto-transition controls, allowing users to insert or remove keys on an individual basis with independent wipes, and dissolves. Each keyer in every M/E also offers chroma keying and colour vector keying, eliminating restrictions of selectable key types. These fully featured M/Es allow total interoperability of effects on all M/Es. The Resizer function in the MVS-3000 allows superb simple 2.5D DME effects to be supported through 4 out of 8 keyers which can be activated by key frames.

A variety of effects – such as Mosaic and Defocus – can be applied to resized images. All these effects can be created without the use of an external DME.

The MVS-3000 provides a high-capacity “frame memory system” that enables video frames to be captured and stored as still images. The system also allows a sequence of frames to be recorded as a video clip (called a “frame memory clip”).

Ideal for production needs starting at 32 inputs/16 outputs 2ME (MVS-6520) and up to 48 inputs / 32 outputs 3ME (MVS-6530), the MVS-6530/6520 feature high performance keyers with chroma-key functionality and resizers, color correction and multi-viewer outputs.

Separate from the main fader, each keyer has its own auto-transition controls, which allow users to insert or remove keys on an individual basis with independent wipes, DME wipes, and dissolves. For further flexibility, each keyer in every M/E also offers chroma-keying and color vector keying.

The resizer function 2.5D DME effects to be supported through 8 out of 16 keyers of the MVS-6530, and 4 out of 8 keyers of the MVS-6520. A variety of effects such as Mosaic and Defocus can be applied to resized images. All these effects can be created without the use of an external DME.

The MVS-6530/6520 switchers possess a rich feature set including a two-channel multi‑viewer output, with a choice of 10- or 4-way split display, saving space on additional monitoring plus offering an easier set up and overall cost reduction.

Other features include an AUX transition capability that allows users to perform mix transitions directly on an AUX output, and newly designed ICP-6530/6520 control panels which include color cross-point patterns ideal for grouping and high-visibility OLED source-name displays. These help the operator stay informed at all times of cross-point, button assignments and source type group.