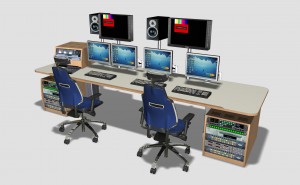 Custom has been selected by Sony Europe, Professional Solutions for the installation of Module-R studio furniture at the Geneva headquarters of Radio Télévision Suisse (RTS). Based in Geneva and Lausanne, RTS provides public service broadcasts on two television channels, four radio stations, and multiple interactive platforms.

Each of the edit suite desks is of in-line design, configured for simultaneous use by an editor and a journalist. The working surface is height adjustable from 660 to 850 millimetres to suit operator preference and has a lifting capacity of 500 kilogrammes. Total width is 3.5 metres.

An 11-rack-unit-high bay below the left and right ends of each edit desk accommodates technical equipment, supplemented by a desktop pod at the left. Four Ergotron LX adjustable monitor arms, coupled with dual high level video monitors, are mounted at the rear of each desk. These support flat-screen displays used as part of the Sony Sonaps MXF-file-based audio/video content management software.

The dual-desk news ingest suite is consists of two separate desks for simultaneous use by up to five staff. Designed for installation in an open-plan office environment, it includes a dual-operator inline ingest desk facing a Custom Consoles Media Wall monitorscape. The Media Wall is dual-sided, the first of its kind, allowing simultaneous viewing from front and rear.

Rear of the ingest desk is a three-position delta-wing-shaped desk for use by a technical co-ordinator (at left) and two media managers. This desk is configured with ten desktop equipment pods grouped as two plus five plus three.

Both ingest-area desks and all nine edit suite desks are finished in cherry wood and have hard-wearing cream laminate worktops. All are fitted with Ergotron LX operator-monitor arms which can be adjusted in height and angle by each operator.