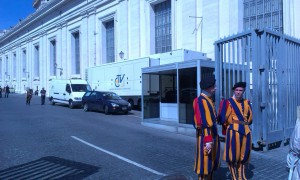 Swiss Guards stand watch over CTV OB16 at the Vatican

In a world first outside broadcast, the ceremony at which Pope Francis will canonise Pope John Paul II and Pope John XXIII will be transmitted live in 3D and in Ultra HD. Centro Televisivo Vaticano (Vatican Television Centre; CTV) with facilities partner Sony, will produce the April 27 broadcast from St. Peter’s Square, Rome in 3D, HD and 4K in what Sony claims to be a first of its kind parallel production.

The HD production will be captured by 15 HD cameras, carried by one hundred broadcasters and viewed by an estimated audience of 200 million worldwide. The 3D production will be produced by Sky Italia, from a Telegenic truck. Six native stereo pairs of HD cameras and three additional HDCAMs converted live will be deployed.

While Sony recorded Pope Benedict in 3D in 2011, this will represent the first live 3D transmission of a Papal event. Sky Italia, Sky Deutchland and BSkyB will broadcast the event. A number of cinemas in Europe will also take the live 3D feed in conjunction with Italian distributor Nexo Digital, with some North American and South American theatres taking a delayed 3D recorded feed.

There will also be a 3D projection on giant screen at a 500-seat basillica in Sotto il Monte, near Bergamo in the north of the country — the birth place of Pope John XXIII. The 4K production will be another test run for the Ultra HD format. Feeds from six Sony F55 cameras will be uplinked from CTV’s OB16 to a Eutelsat satellite and routed back for live replay in the Vatican’s Paolo VI suite on a 4K Bravia.

There are plans afoot to route the 4K signal for projection via a Sony 4K SRX- R515P projector located at Czestochowa, in Poland, a place synonymous with Pope John Paul II.

CTV will archive the event in 4K on Sony’s Optical Disc Archive (ODA) system. Further detail on the workflow as follows: 4K will be recorded on SR at 880Mbps at 422 10 bits in OB16 and encoded in Sony’s production format XAVC for post production. The live signal will be encoded and distributed in DVB-ASI by Globecast as four 3G HD DSI signals (4x 27Mbps) to Eutelsat satellite where it will be muxed into a single MPEG4 transport stream at 110Mbps.

The F55s will be connected by over 2km of fibre to OB16. A pair of HD radio cams will be converted upwards to 4K for live switching. One set of workflow tests of interest to Sony includes use of Canon and Sony lenses attached with B4 and PL mounts. Fujinon Cabrio’s in use include 1 x 19-90; 1 x 24-180; 2x 85-300; and 2 x Canon 30-300. The F55’s are fitted with HDVF-EL75 OLED viewfinders and the CA-4000 system adaptor. The cameras will be in largely static positions with limited zoom options as befitting the occasion.

Another test will examine the PWS-4400 XAVC production server and Media Gateway software which Sony is positioning as a direct competitor to EVS 4K servers. This technology, introduced late last year, is not planned to be included in Sony’s production of the World Cup Final in 4K.

A third test concerns the way signals from various HD, 3D and 4K cameras can be mixed and matched to produce simultaneous and separate productions.

The Vatican’s objective, according to a spokesperson, is to develop productions that enhance the involvement of people and to provide wider archive formats. The project was conceived last October. “Ultra HD gives incredible detail and a real emotive quality,” said Stefano D’Agostini, CTV, technical director. “It is probably more natural than 3D because there is no artificial tool in front of the eyes. We are looking at 4K as the highest quality to store material in future.”

“Sony technology will make watching this historic event closer to reality for hundreds of millions of viewers,” said David Bush, Sony Europe’s director of marketing. “This is one of a number of tests on live events Sony is carrying out to explore different production workflows for 4K.

“The scale of this particular event is important because of the integration of different formats which we believe to be unique. Each of the three directors will have access to feeds from each production. HD can be upconverted to 4K, or we can offer a downconversion of 4K or cut outs to HD. Feeds from certain 3D cameras will also be made available to the HD broadcast. We are learning each time about what works best for 4K in this and other 4K live events this year.”

This will not be the first time a Pontiff has been recorded in Ultra HD. The last General Audience of Pope Benedict XVI on February 27, 2013 was also captured on Sony 4K equipment, as was the first mass of Pope Francis, celebrated on March 19, 2013.

Sony’s relationship as a technical partner to CTV goes back a number of years and has seen it outfit facilities including the 24-camera OB16 with 3G infrastructure primed for 4K action; a fully tapeless control centre which rests on Sony’s Media Backbone asset management platform; and the digitisation of CTV’s 10,000 hour archive from tape onto Sony’s ODA storage format.

CTV was established by Pope John Paul II in 1983. It films the activities of the Holy Father and Holy See – the central government of the Roman Catholic Church — and produces its own programmes, providing footage for other broadcasters and keeping an extensive archive for future use. John Paul II died in 2005, and John XXIII passed in 1963. Some 5 million pilgrims are expected to fill St Peter’s Square on April 27.

The funding partners to this event include the Knights of Columbus, which previously financed CTV’s three OB trucks as well as Vatican satellite uplink and downlink transmitters in order to spread the Gospel with advanced communication. The Knights of Columbus was founded in New Haven, Connecticut in 1882 to respond to the spiritual needs of immigrants marginalised by 19th Century society.