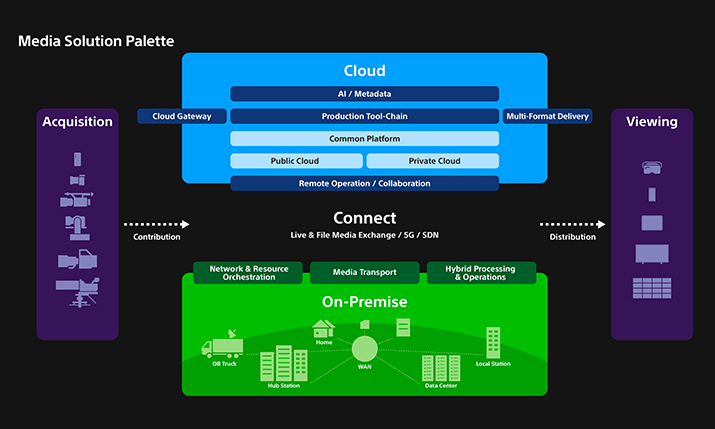 The new Creators Cloud and Networked Live umbrellas will fully integrate for customers, allowing complete flexibility. They will also pull together Sony’s acquisition and viewing offerings

This year at IBC Sony Europe is announcing a new evolution of its vision which will see cloud and on-premise solutions bought to the fore in its strategy.

Sony Europe is bringing all of its existing and new cloud solutions together under the Creators Cloud umbrella, while its on-premise solutions are amalgamating under the Networked Live title, thanks to its acquisition of Nevion.

This joining of its existing and future products – some of which are being announced at IBC this year – under the two umbrellas is focused heavily on the interoperability and integration of the two areas of cloud and on-premise, allowing Sony’s customers to use what they want, when they want it and how they need it.

On 1 April Olivier Bovis took on the position of head of media solutions for Sony Europe. Prior to this promotion he was director of sales. Speaking to SVG Europe on the reason for Creators Cloud and Networked Live, he says: “We wanted to take a little bit of a different path this year. I think we see continuous pressure on the way consumers are devouring content. For us, it dictates who are the next customers in line, but more importantly, how they expect to work, and what they want to do in terms of way of working, workflow and organisation.”

As to how ways of working and therefore workflows are evolving, Bovis says it is all about being flexible. “There is an expectation as well on an impact story of the post-lockdown era that we cannot eliminate from our thought process, thinking it’s just a short term issue, because finally I think we all realise it’s something that is here to stay for the long term; we see a fundamental evolution in the way people behave with working from home. We see that this has direct impact in the way the infrastructure, the workflow and the tools that some of our clients are deploying have to actually respond to this prerogative, because it links back to talent.

“[Therefore] remote working in distribution or production, for example, is becoming much more common. Accordingly, there is a necessity to develop specific expertise that maybe in the past, we didn’t have so much, or the same requirement for. For example, security is one, [flexibility] is another, and so on and so forth.”

He continues: “[We see] an evolution of the key trend for what happened between 2020 to 2021, where we saw a massive acceleration of the expectation of remote production really increasing, combined with the spirit of keeping real time production something in the forefront. This has a very significant impact at many levels, and [gives] us two key drivers: one is cloud [and the other is] remote and distributed production.

“The fundamental lessons, so the evolution of our vision, is about the central piece here, which is really related to the expansion of our vision about embedding cloud into our value proposition, and the second piece is about the evolution of on-premise. Those two blocks [cloud and on-premise] start to fundamentally merge one to another, to create a hybrid operation,” he notes.

“What we want to do as well on top is we want to make this evolve into more of a system-based approach overall. So the camera is not just an edge device anymore. So sideways of our evolution is the convergence between products. The idea is to really take those products and really make them more like a system overall.” 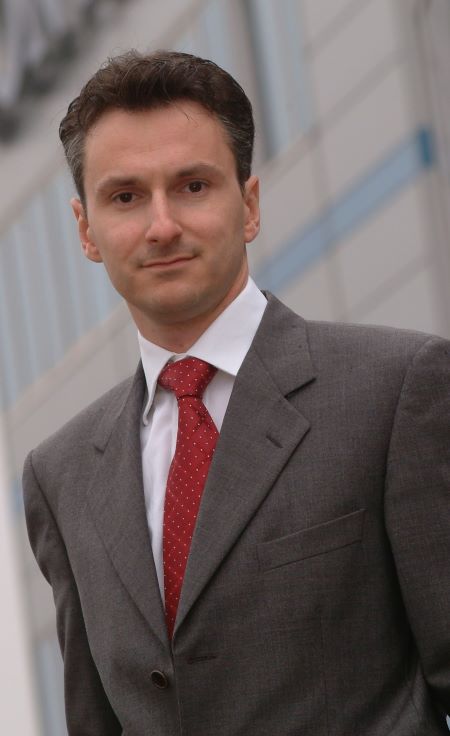 While Sony has various cloud and on-premise products already available on the market, pulling everything together now and for future product releases, and enabling those products to easily integrate for customers is key in this latest announcement.

Bovis comments: “First of all, on cloud, we do have a series of cloud services available today. But we were critically lacking a common platform where all these services were available, unified in terms of accessibility, simplified for customer access, more easily plugged into each other, like a series of Lego that you plug in and out as you see fit if you want, and offering a raft of services that are actually really combining forces.

“At IBC we are announcing those services that will, step by step, start to take place into this common [cloud] platform. We will be launching new services specifically also at IBC, particularly in the domain of live, including a system called M2Live, which is like a switcher in the cloud. There will be a series of services like that will be launched.”

He goes on: “So what does it mean today? Well, we have so called cloud gateway that allows users to actually enter content from the acquisition in the field, directly into the cloud to be used for production tools, news, media, asset management, and others, including data enrichment through artificial intelligence (AI). We have a system called the Media Analytics Portal that allows us to use the AI engine from Amazon and Google for facial recognition, auto transcripts of words, and more. There is also an element on remote operation and collaboration, that is the Ci platform, for example. Then there is the delivery side of things.

“But more importantly, it would start to connect with the world of on-premise for either file-based operation, and live as well. That’s the result of the combination of forces between Sony and Nevion.”

Sony acquired Nevion almost two years ago. Through the integration of the two companies, Sony has seen a fundamental acceleration of its vision to develop network and resource orchestration, embedding Nevion’s tools into the Sony world.

Adds Bovis: “We have also developed an approach to take hybrid processing and operation, and we developed together a technology that allows users to facilitate media transports in order to make particularly the world of live behave like an on-premise system, then all of that we have started to fundamentally connect because we see also evolution of the connectivity layer where 5G, for example, comes in play. We’ve developed a software-defined network architecture solution with Nevion.

“The spirit behind [this] is really to describe this kind of hybrid direction of travel where we are going to capitalise on the strength of the on-premise world between Sony and Nevion, and linking it to the cloud in the spirit of dynamic provisioning of resource and flexibility. The whole idea is these two worlds will connect and complement each other being either on-premise or cloud driven, based on the needs of the customer or the requirements of economics or functionality.”

As to how much of a big move this announcement is for Sony, Bovis says, “it is big indeed”. He explains that this new focus on cloud and on-premise solutions will help define the area for clients, so the spotlight is not always on the latest and greatest camera.

“To an extent we are victim of our own success. It only takes a great camera to be launched at an exhibition so that everybody says, “oh, Sony’s coming with a new great camera”. People kind of forget to talk about everything else. But every attempt we made [to highlight other areas], somehow your old demons are there and [people] grab onto the new camera, which is the latest flagship of the moment. So it’s not like this strategy is coming completely out of nowhere, but there are two factors that are a fundamental accelerators for this change.

“One [accelerator] is the Nevion acquisition, because suddenly the Nevion and Sony proposition were really one plus one. I must say that I’ve observed many acquisitions over the years, and we do sometime acquire a company to get some technology, but then you realise you overlap so you have to make a selection on which [technologies] you keep and which ones you don’t. Sometimes you acquire somebody to, I would say, capture their assets and eliminate a competitor from the market. But this time [with Nevion] it was really completely complimentary offers.

“The second element,” continues Bovis, “is the fact that there is a strong aspiration as an organisation – not just on the media professional business, but Sony Corp in general – to accelerate the services that we’re putting through the cloud. You’ll see many, many more services appearing over the course of the next few years.”

The hybrid approach, allowing clients to take from either the Creators Cloud or Networked Live, and to shift seamlessly between both as needed, is important says Bovis, particularly as different companies are at different stages of cloud evolution.

He states: “Not everybody will be moving directly to cloud and be able to swallow the economic impact of complete remote operations everywhere. Not everybody will be ready to actually give up on some infrastructure tomorrow. So, we need to take this economic element in consideration alongside, of course, the technology capability, and the way people fundamentally expect to work workflow wise, and resource wise and so on. And that’s leading us to this overall hybrid approach, combining cloud, on-premise, and hybrid together, to create this kind of very flexible environment, both for file, and live based production.

“The reality is, Sony has always had a philosophy, which is to keep in mind that transition period. Not everybody is going to be fully on-premise. Not everybody’s going to be fully cloud, and that’s going to take quite some time before we see all the customer profile sizes and type of profile, fundamentally, evolving in a direction where maybe in a complete futuristic world, everything is delocalised, decentralised on the cloud, and that’s it, and so on and so forth.

“These are fundamental challenges: challenges of economics, challenges of technology, challenges of knowhow within the customers as well. An example, it’s well and good to think that everybody could go tomorrow and run sports events of a large scale, fully IP, remote, distributed, and so on. Yes, the technology allows that now. It’s complex, fair enough, still today in reality. Economically, it could be a challenge eventually as well to make it work.

“But one of the probably unforeseeable issues is the expertise of the people to make it work, because technically everybody [has to] choose to really learn this. Before that, if you are maybe sending a crew on the field to pre-instal a set of cameras on a stadium or something, nowadays, you need to send qualified people who knows IP, because this is going to be a different type of approach, a different type of setup and so on and so forth.”

Bovis concludes: “So there is a journey to follow. And that’s why we try to always take this approach of managing that transition. Hence, the comments about hybrid that comes through. We’ve done that numerous times over the years. Myself, I’ve witnessed a lot. For example, when we did the migration from linear to non-linear file acquisition, coming from tape to digital, for example, it took 15 years to actually get people to go to file-based operation acquisition to the last scale. At that time, I remember when we introduced it, everybody said it’s going to be in two years time. Never! I think here today, we are talking about a subject of much larger magnitudes, scales and complexity. So, I think it will take time. We need to manage this transition, taking into account again, economics, technology and capability.”