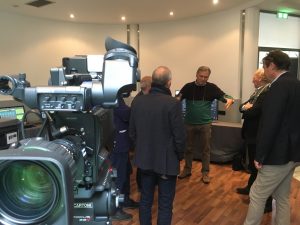 Nicolas Moreau, live media solution marketing manager at Sony Professional Solutions Europe, remarked that the emphasis for Sony these days tends to be on “proposing a whole set of solutions for producing, managing, editing and distributing content on any platform. The common idea is to simplify, streamline and accelerate the production process without moving expensive equipment, optimising and allocating only the necessary resources in every way and on each occasion.”

Underlining this approach, Sony created a hands-on demo room in which Benito Mari, sales manager Italy and others from the Sony Italy staff showcased the HDC-3500 4K/HD HDR cameras and the new Grade 1 technology applied to the BVM-HX310 monitor.

Also on show were the new camcorder handycams PXW-Z90 and PXW-Z280, demonstrated in streaming workflows with the XDCAM AIR and Virtual Production solution.

The XDCAM AIR illustrates a specific emphasis in Sony’s production technology development in that it suits multiple applications, such as news and entertainment. It can support native in the cloud and live production, and is applicable both to linear TV and internet services. XDCAM AIR deals with the entire chain from ENG shooting in the cloud to broadcast distribution, and makes it easy to record media and upload proxy streams to the newsroom in order to accelerate the overall workflow.

At the two Technology Day events Sony drew attention to many other current offers, including Media Backbone Navigator X, which is a content and workflow management software solution for off-line production integration with metadata and fast deployment of content based on flexibility and scalability. Based on an open source platform it is meant to keep the costs low and facilitate off-line work. It manages the assets and the library so that users can quickly track down the content they require, while there is the opportunity to insert extensive personal metadata.

Meanwhile, Virtual Production is an on-demand virtual cloud production service intended to provide a complete toolset for multi platform professional simultaneous streaming wherever needed. It enables low cost, high quality live production streaming in real-time. It is a response to the expensive external broadcast facilities required for major events which involve the use of big vehicles, large crews and extensive equipment inventories.

It is based on a scalable ‘pay as you’ use incremental subscription, with the images from up to six cameras or camcorders able to be orchestrated and streamed first to the web virtual video mixer and then straight to Youtube, Facebook, Instagram, any CDN, live or recording facility. Essentially the user log-ins to the service, configures the live streams QoS, RTP or RTNP, and selects the outputs. 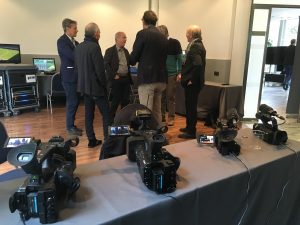 With video consumption via mobile devices increasing by around 30% or more each year, Virtual Production makes it easier to respond to this demand, and as such it is likely to be of interest to a broad-cross section of end-users, including but not limited to broadcasters. Since the business model is based on a ‘pay as you use and stream’ subscription, it is a cost-effective solution for multi-location live streaming as well.

The images and audio are transmitted live in the cloud and a virtual switcher hosted there manages everything simultaneously in order to create a single stream which is immediately available on different platforms, as long as there is an internet connection.

It is meant for highly interactive, basic production, but one that is also of a very high quality. A clip player, some basic graphics and some transitions are provided also provided in the system.

Output at HD 720 or 1080i on a 10MB stream is guaranteed, and with the use of Sony cameras or some adaptors the QoS is guaranteed even in the case of bandwidth drop.

It is also possible to define the members of the control staff and assign roles separately, i.e. one operator for the video and one for the audio, wherever necessary.

Another key technology for Sony is the Media Backbone Hive platform, which features a master software system working in the cloud and orchestrating everything to manage the content with publishing capabilities. This is geared towards big content producer companies like Reuters or Associated Press, who produce a lot of automated news with multiple distribution platforms, on social media or websites, or on linear TV.

The system manages functions such as acquisition and ingest, and can work with any NRCS newsroom system. Practically it is capable of handling the same kind of content, channelling it towards different distribution channels with multiple language requirements (for example, Vatican TV now delivers content in 16 languages).

It is no mystery that huge companies like Facebook, Google and Amazon are archiving on optical systems. Sony declares a guaranteed data conservation for 100 years, whilst automated MAM management is also included.

Media Backbone Hive is a system with broad appeal to different markets, including military and broadcast stations, thanks in so small part to its extensive security capabilities.

Sony also took the opportunity to highlight some of the solutions offered by sister companies, including Hawk-Eye, which is well-known for its goal line, assisted referee and ball-tracking technologies now in use by a host of different sports. Meanwhile, MemNom is dedicated to archiving and digitalising a wide variety of content, the restoration of historical content, and metadata creation.

Ve.Nue is a company involved in the distribution of content on digital platforms like Google, Amazon or Playstation. In just one hour they can subtitle a programme in 20 languages and push it to over 20 platforms around the world. For example, all the new episodes in a series can populate worldwide websites and be distributed very easily with this solution.

All solutions are cloud-based and another one from a company called ‘Ci’ is a free-start or monthly subscription service platform with some specific AV media functionalities. Originally derived from Sony Pictures it was designed for reviewing the daily rushes during film production. It includes basic editing and trimming tools and is handy for moving content from cloud to cloud without the need to download or upload anything.

Crispin is another sister company. Based in the USA, it is a software automation company  that says it offers a number of advantages to workflows involving repetitive programming, thereby making it possible to automate the distribution of programmes.

Also at the Milan event Sony highlighted other developments in production servers, automated production and 4K upgrades that are likely to play an important role in the company’s broadcast story over the next 12 months.