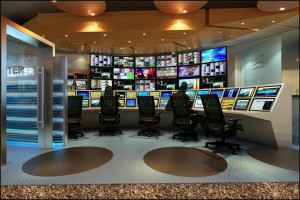 The facility, slated to be open June 2015, is located in London’s Silicon Roundabout and offers 4,000 square feet. PacTV London’s new home is twice as large as its previous space and is fully 3G-capable. It features two HD studios, 20 racks of collocation space, an on-site generator as well as eight fixed and steerable satellite dishes.

“The new London facility will be the most advanced broadcast facility in the region, and PacTV is working with a wide range of vendors and suppliers to provide the best experience to our customers,” says George Lopez, vice-president of operations. “Central to this expansion is the construction of two new HD studios. A lot has changed since we built the original facility eight years ago, and as clients have moved from SD to 4K we have had to redraw the lines when it comes to how we manage broadcast projects and events.”

To accomplish this, PacTV selected Sony FS 5 cameras, which are 4K-compatible while still capable of supporting current broadcast formats. It also adds a wireless functionality to its well-known broadcast camera control set. “The FS 5 allows us to move forward with deliverable assets while allowing our operators to easily work inside Sony’s familiar workflow,” adds Lopez.

On the other side of the lenses, the studios will feature BBS Lighting Area 48 LED fixtures with interchangeable phosphor panels. These are controlled from a remote DMX for external lighting control. This will allow broadcast directors and live producers to be able to improve every shot, up until the last minute before going on-air.

The facility has also recently chosen the Sharp Aquous Q+ Series LED Smart TV monitors to display its background images in the studios. Lastly, to manage all the connectivity in and out of the facility, PacTV chose a Miranda 8500 Series router (NV 8576), featuring a 576 x 1152 matrix. The Miranda 8500 Series allows the company to integrate video, optical and Ethernet routing all in one platform. As video and content changes between IP to fiber to uncompressed feeds, the new router seamlessly integrates all of these mediums allowing PacTV’s operators to focus on content type.

“From camera to cable, from lens to local connectivity, PacTV’s London transition is set to be a transformation in how companies manage broadcast media services,” says Lopez “PacTV highly anticipates this next chapter and looks forward to being at the forefront of the next wave in broadcast workflow with the opening of this upgraded facility.”