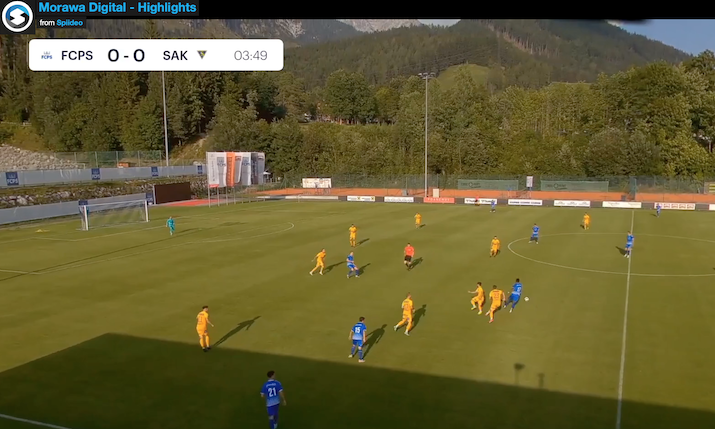 Morawa Digital, which captures live games at scale to serve publishers, clubs and fans across all tiers of sports, is working with media partners such as Kronen Zeitung to capture, prepare and stream sport to fans across Austria. It also partners with individual clubs through a pay-per-view model.

Both of these operations rely on Spiideo Play, an automated live streaming platform. AutoFollow – AI game tracking technology – keeps track of the action and captures broadcast-worthy footage without the need for a camera operator. This intelligent camera system allows Morawa to cover games at scale, with thousands of games being captured with minimal human effort. The company captures as many as 15 concurrent streams simultaneously with just one person on hand to monitor the cameras.

“We are able to – without any drawbacks – stream any game that we want to without worrying about the need for a camera operator,” said Hannes Rangger, chief technology officer at Morawa Digital.

Fixed Spiideo cameras have been placed at partner clubs’ venues. Connected to the internet and accessible through the cloud-based Spiideo Play platform, the set-up process has been reduced to a few clicks.

Morawa wanted to be able to use the automated live streaming solution alongside its own tools and platforms. Using Real-Time Messaging Protocol (RTMP) in Spiideo Play, the company can connect its Spiideo cameras to an external streaming platform, whether directly to video sharing sites such as YouTube or alternative services such as Fan.at, a streaming platform operated by Morawa and Kronen Zeitung.

“To be able to stream it to our own platform without any boundaries was especially important, and the feedback is very good,” he added. “What we hear a lot about the video quality, is that it’s a sharp, clean image.”

Live streaming presents a valuable monetisation opportunity to the clubs involved. Clubs that work with Morawa through its PPV model are able to generate revenue from their games by charging fans to access streams. Likewise, clubs can use Spiideo Play’s live production tool, CloudStudio, to show logos and advertisements during streams, generating additional revenue and increasing the appeal of club sponsorship opportunities.

“Spiideo offers a great synergy between us and our partner clubs — they give us the rights to stream their games and in return gain access to Spiideo Perform, the analysis platform,” said Rangger.

“One club we work with – St Johann, a small club – says the ease of accessing footage through Spiideo Perform has improved their game by miles,” he added.