Swedish broadcast company Spocks Family has recently expanded its use of LiveU technology to bring three well known extreme sports events to life for viewers. These events – the Isklar Norseman Xtreme Triathlon, the Ötillö Swimrun World Championship, and the Swedish Sportfish Masters pike fishing championship – posed challenges for Spocks that it was able to overcome through the use of LiveU’s technology. The LiveU technology was supplied by its regional partner Mediability.

On why Spocks chose LiveU equipment over other vendors, Robin Danehav, storyteller and producer at Spocks Family, told SVG Europe: “We have evaluated some other brands and tested some other types of equipment in different categories in the past. But the reliability of the LiveU equipment and the mobility for the camera operators has more or less become our standard. We have gotten used to the worry free connection, which allows us to tell our stories without having to think twice about if the equipment working or not.”

Each event poses unique broadcasting challenges for Spock when it comes to capturing it for streaming viewers, based on the terrain, the length of the events, both time and distance, and the weather. With the Isklar Norseman Xtreme Triathlon, there was the additional challenge of the speed of the cycling leg. Not only that, but the event, which involved 3.86km swim, a 180.25km bicycle ride and a marathon of 42.20km, also has major shifts in altitude, finishing at nearly 1,900m above sea level.

Spocks Family used multiple LiveU units that streamed to a LiveU server in the control room. The programme was then cut together in real time and streamed to the organiser’s YouTube channel as well as on national broadcaster NRK’s website. Also French Eurosport used its footage without Spock’s permission, Danehav stated, on its Facebook page, attracting around 1.5 million views. 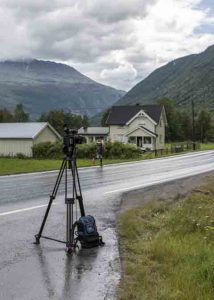 Danehav added that the biggest challenge with Norseman, “is that the course is so long, and that the cycling leg is so fast”. He went on: “Obviously logistics is key here as well, but also tech solutions like gimbals on the hood and trunk of cars to be able to capture the speed of the race in this amazing environment. Also, the 4G coverage high up in the mountains (and there are a few along the course) is sort of limited.

“This means we sometimes have to record locally and play back when the data rate allows it again. We have to use technology that we can absolutely rely on, hence using LiveU, because our job is to tell the story of the event, which as you can imagine is a real challenge over the 14 hour live broadcast.”

On the use of 4G connectivity for in these broadcasts, Danehav commented: “4G is used in all of the mobile LU units for bonding connectivity, to bring the live images back to the control room. The control room gives directions to the camera operators where to go, what to do next etc, mixes all incoming video and audio signals for the and broadcast it to viewers online.”

Yet Danehav added on the use of mobile technology: “We always need more and better 4G connectivity. Since there is, and will probably always be, blind spots out in these remote locations, we have built that risk into our production model. Technology is currently developing faster than the audience [cares to learn about it], so at the moment we’re still broadcasting in 720p50, which is more than enough.

“However, moving forward this will of course change, and if 5G (and 5G bonding,) is coming along allowing higher bandwidth, we could of course increase the average picture quality dramatically. But blind spots will always screw it up anyway, so for us, and most of all, for our viewers, reliability and stability will always win over the number of pixels in the end,” Danehav stated.

Danehav added: “This was the first year [we have covered this event], and we learned a lot. We’re now sketching up the changes for next year to make it even better.”

This is the fifth year that Spocks Family has been contracted to provide live coverage of the Ötillö Swimrun World Championship, and the third year that it has used LiveU. The event, which is run in pairs, covers 75km across 26 islands, with 10km of swimming. This year stood out because the event took place during a storm, which battered the film crews for 10 hours. On the storm, Danehav said: “This was tough on our crew out in the field. The equipment took some beatings by sideway rain over 10 hours, but the LU500’s in their special bags were staying alive all the way through it.”

Spocks Family used the same set-up as for the Norseman Xtreme Triathlon; four LU500 units out on the boats following the field through the course., and a server at the control room.

Danehav commented on how the company overcame issues during Ötillö: “For Ötillö, logistics and transportation is the biggest challenge, after that it is telling a story that holds up and stays interesting for the viewers for more than 10 hours. It’s a long course, with many interesting things happening simultaneously. It’s a beautiful scenery but without any kind of roads for the better part, and we have to rely mainly on boats. Who goes where, what time and for what part of the story. That is what we are planning about a month ahead, which is the key to success in this kind of race.”

Finally, the Swedish Sportish Masters pike fishing championship provided different challenges. Danehav said: “With the races, there is an inherent structure that helps the storytelling as competitors move from point A to point B. With this fishing competition that’s clearly not the case. Rather, there were 10 teams on 10 boats covering a huge area of the Baltic coastline, all hoping to catch the longest combined length of their best five catches. Our task was to make sense of this for viewers all over the world.” 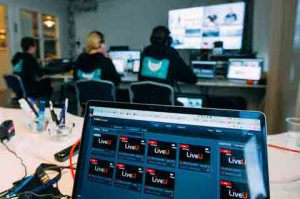 Spock and LiveU at the Ötillö Swimrun World Championship

Danehav continued: “This one is a different than the other two, since we have no idea whatsoever where the competitors are going. They have a huge area to choose from, and they all have their secret fishing spots. This complicates the storytelling somewhat, since there’s no obvious line to follow. Technically, this grew with six LiveU units in the fields, in different boats, without charging possibilities during the day we had to prepare each team with plenty of battery packs.”

Once again, the weather was unfavourable but there were no glitches in terms of coverage. The LiveU servers took the feeds and pushed them through into the production system. Across all three events, LiveU’s Central management platform was used to monitor the units remotely.