The various sessions involved a very dense panel of Italian TV services and particularly distinguished broadcast operators in the field of sports production. Below is the first of the two articles provding a brief summary of the discussions.

The digital Transformation for sports production of Sky Italia, as described by Matteo Sangalli, head of post production digital Sky Sport, requested both a mindset and operational approach change, starting with the concept of “being seated on a gold mine” due to the presence of high level content in very high quantities. Technique has always accompanied everything that is done in Sky and becomes the “enabler” of new forms of storytelling and creativity.

The macro areas identified in which to intervene were: workflow, processes for new professionals, and tools to monitor the entire end to end process. It was necessary “to have more eyes on the process,” and to understand how to process the incredible amount of metadata to make operations more efficient.

The whole architecture has been revised, starting from a series of main concepts: the post production department alone could not take care of everything, so it was essential to reduce as much as possible repetitive and redundant operations such as metadata management; mapping them, using suitable systems in a more scientific and organised way; and updating post production systems.

A series of fundamental content revision operations were completed to achieve an effective digital product, with a couple of proprietary tools including an internal app developed to monitor the entire end to end process, from metadata to transcoding. The “metadata interface” is an internal app that queries all the databases that contain metadata and delivers them to the video platform, solving many complexities. Then a new workflow and new roles were created, with new capabilities.

Flavio Russo and Roberto Montoli explained how it was possible to “connect all the experiences and try to synthesise them into something new”.

Augmented reality was used to unify the clip world and the study world. The study was ideally divided into defined parts, the management area, the area where the news and data are analysed, where the AR is the heart and unifying element of the whole. 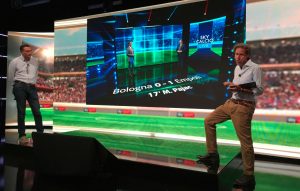 Each part has become a portion of a whole and the filming that enhances this approach employs a Robycam to deliver the greatest immersive experience possible. The centre of the action is not the area of focus but a mix of images coordinated only thanks to AR.

VR is not aired but is used for designing. It was employed to predict what would become the new studio, to view shots, understand what could work and what to improve.

AR is used to create aesthetic elements, perspectives, sets and angles. It works through a star tracking system for all cameras that follow white reflective disks strategically placed on the studio ceiling. Then the MoSys Star Tracker infrared system reads these tracking points. The Robycam instead is based on the length of the cables and the operators manage the camera movements.

A virtual window is generated and a virtual camera is created inside it connected to the real cameras and, taking advantage of the perspective lines and escape routes, realises the graphic effects on various levels following the same perspective as the camera. All screens are managed by Dataton WatchOut and the AR is managed by Vizrt, as is the virtual window.

OTT in Italy and Now TV

Daniel Masella traced the main trends of a relatively new market, involving streaming video or OTT: “an attractive but very crowded market with many players and a very wide choice of broadcasters, each with its own public proposition and direct monetisation, without intermediaries.”

Consumers are now able to choose among many different services and the competition of the players moves on the production of quality contents. The emerging demand is to aggregate some of these services, such as Apple, which wants to provide a single interface for many proposals, just like SKY is doing with the SKY-Q platform.

NAB 2019: What was seen and what was interesting?

This panel, moderated by Massimo Bertolotti, Broadband CTO Sky, summarised some of the hot topics seen at the last NAB in Las Vegas, such as remote production, de-localisation, IP standards and system virtualisation in the broadcast area.

Giotto Vignati Berto, head of Mtce engineering, started from the concept that connectivity decreases production costs from venues – -real-time codecs, encodings with low bit rates and even low delays — and the technologies that enable these solutions are available today.

Some tv services are already using remote production and collaborative production from anywhere in the world. The cloud as a service, connectivity, virtualisation, and video over IP, allow geo-de-localise production and the ability to tackle on-demand work without a fixed facility. Under certain conditions, this procedure is more efficient and offers the advantage of a stronger collaboration. 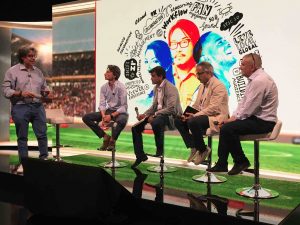 despite the fact that IP is helping, connectivity from the stadiums grows, and 5G in perspective is rowing in favour of low latency contribution and distribution. Even the new codes help: the likes of HEVC, JPEG XS and SRT and other transmission protocols allow us to use different channels (5G, fibre, internet) for different remote productions. “To think that remote production lowers the total cost is wrong, but it allows you to create different levels of production in the market, depending on the value, in ad hoc segments.”

Carlo Struzzi of Video Progetti indicated that remote production is a response to market needs, where there are more players in the distribution of content that are always in greater demand, so it is necessary to contain costs in production with an adequate quality related to the chosen distribution platform.

Remote production comes in handy with technology where there are better codecs and more integrated devices that help the publisher produce quality content that is adequate for the budget and distribution (from Facebook to HDR).

“The solution is to allocate the right amount of adequate resources, in response to editorial needs. There are savings in terms of transport of materials and people, shift optimisation: remote production is possible at all levels from video conferences to distribution on Sky and other broadcasters”.