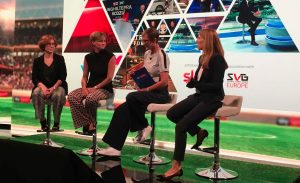 At the recent Sport Innovation Summit in Milan hosted by Sky Italia in association with SVG Europe, a Women in Sport panel was moderated by Serena Chaima. The other panelists from Sky were Paola Formenti, Martina Maestri and Cristina Villella from Sky.

Wrapping up the day’s proceedings, Sky’s Riccardo Botta helmed a panel titled The Future of Italian Sports Production in discussion with Andrea Gianolli from ONE; Natalino Pintabona from NVP, Andrea Bonomo from Cinevideo and Davide Furlan from Global Production.

Regarding the emergence of 4K and HDR Andrea Gianolli said, ““4K is already a very visible reality and at the Barcelona Grand Prix a workshop was set up to show the state of the art. Implementing 4K is not a simple step even where the HDR is native because sources often are not HDR, even if the renewal process is in progress.

“The one-year HDR study in production and archiving with comparisons and evaluations was carried out together with the Evertz team, also with firmware modifications and with the Sony team (including 8K filming).

“For more than a year Dorna for its IPF International Programme Feed (the race without specialties) has produced in 4K HDR with 26 cameras and the main replays (the parts of specialties at the moment are not), starting from 10 Bit native HDR.

“A multicast multi-feed was presented to suggest a choice without compromises, compressions and reductions; and both 4K HDR and 4K were provided, as well as HD and HDR HD, with the complete chain. On some Sony 32 “monitors the various formats were projected side by side,” he said.

According to Davide Furlan, Global Production, “one year has passed since our vehicle was released: it was an important choice to create a truly 4K HDR vehicle, but the reality is different and still today, despite some productions in this native HDR format (the Ferrari Challenge finals, a race of the Ski World Cup in Val Gardena), many external signals do not reach us in HDR. So there are possibilities: 4K can be done and I honestly do not know what is missing in the market to start a definitively native HDR production.”

Cinevideo’s Andrea Buonomo commented, “last year we produced HDR integration and I can confirm that the remaining problems were the signals that were not all in HDR, as well as the graphics — and then also the down compatibility to the HD signal remains challgeng.”

Natalino Pintabona from NVP said, “we were precursors to come out with a 4K HDR vehicle in 2017 and with our experiences abroad we found the problems of integrating non-HDR signals. This is certainly a big limitation for the spread of HDR, in addition to the lack of distribution channels and overall costs.”

The speakers all agreed that if you start from a 4K HDR programme and down-convert to HD the resulting signal is not always of superior quality, because the result “depends on the cook”.

The broadcast engineering department of Sky made comparisons between 4K HDR and SDR and among the things noticed there were issues in the lighting of the stadiums that remain problematic, to the point that sometimes even to some the SDR is visually more pleasant than the HDR!

So even if today we are ready from the technology point of view, the theme which still remains is “when 4K will become mainstream?”.