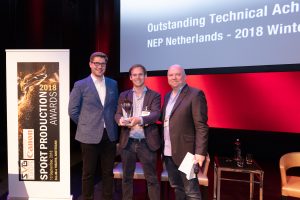 FIFA’s TV Services division collected two of the five awards for its production of the 2018 FIFA World Cup in Russia. As well as coming top in the Outstanding Live Achievement category for its 37-camera live UHD broadcast of all 64 matches, FIFA TV also picked up the inaugural award for Outstanding Technical Achievement, Imaging.

Florin Mitu, FIFA’s Head of Broadcast Production, collected the Awards and commented: “These two awards round off an exceptional FIFA World Cup that was notable for the outstanding quality of the live broadcast. We are particularly delighted to win the new Outstanding Technical Achievement award for imaging for our innovative multi-layer production concept, which allowed us to deliver multiple formats through a single production process and enhanced video quality on every TV set around the world.”

Josh Smith, FIFA’s director of TV services, added: “We’re very proud to receive these awards, which reflect the hard work and dedication of the whole team during months and years of preparation. They are a recognition of our commitment to enhancing the experience of football fans everywhere and telling the story of world football’s greatest spectacle at the very highest standard broadcast technology allows.”

Meanwhile, the NEP The Netherlands team, along with their partners at Discovery, were the winners of the Outstanding Technical Achievement, Audio category. NEP The Netherlands was recognised for its work at the Olympic Winter Games PyeongChang 2018 with its Remote Commentary solution.

According to an NEP spokesperson, “the scale and complexity of this project, combined with the volume of content, was a great technical and operational challenge. The number of countries, regions, cultures and languages involved in Discovery’s coverage of the Games made this project unique, so the company turned to NEP for an efficient, cost-effective solution. Remote Commentary, a proprietary solution from NEP’s Media Solutions team, was developed to enable broadcasters to increase the value of commentary content, reduce event costs and deliver the highest audio standard.”

“Congratulations to all our winners at the Sport Production Awards, whose achievements reflect an industry whose creativity continues to reach new heights. We look forward to announcing our plans for the 2019 Awards in the near future,” said SVG Europe general manager Joe Hosken.