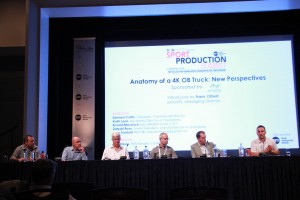 With the transition to IP and 4K continuing to gain speed – and the prospect of HDR implementation on the near-horizon – there is no shortage of critical factors informing the latest generation of OB truck projects. Many of these were reflected during a fascinating session entitled ‘Anatomy of a 4K UHD OB Truck: New Perspectives’, which was sponsored by sonoVTS and took place during SVG Europe’s Sport Production Summit in Amsterdam on 8 September.

Launched in August, Sky’s new UHD offering – initially based around sports and on-demand movies – is likely to prove highly influential in determining the outlook for 4K over the next few years. Reflecting on Sky Sports’ history with 4K, Lane observed that its trials with the new technology began with a single live game in August 2013, where the primary aim was “to bring the signals in and see what they looked like”. At this stage – with Sony F55 cameras being used prior to the introduction of the HDC-4300 – the emphasis was on “finding out what some of the challenges were going to be [and setting the scene]” for Sky’s own possible future in UHD.

As the Sky team began to delve more deeply into the implications of 4K, it became clear that venue space was going to be a crucial consideration – hence the general industry drift towards the concept of a “one-truck solution to create HD and UHD output”.  Of primary importance here, said Lane, was that “we did not want to compromise what we are offering… Production personnel had to feel comfortable.” It also became clear at this fairly early stage that specialist broadcast lenses and other key equipment were essential, “and for that we needed to wait”.

Subsequent to the devastating fire that claimed multiple OB trucks at NEP’s Bracknell facilities, and as the broadcast service provider began to think about replacement trucks, “we had conversations with them [about the fact that it is] not two trucks, it is one truck [we require], so we started to work out which building blocks were needed.” 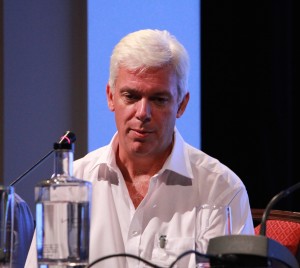 Sky’s Keith Lane: “We know we are on a stepping stone in the UHD journey” [Image: Tim Frost]

With the UHD service now up and running, Lane is upbeat about the results achieved so far, but conceded that it is a moving target given that HDR and immersive audio are set to exert a considerable influence on 4K production in the years ahead. “We know we are on a stepping stone in the UHD journey, and so we are waiting to see what the next iteration will be,” he said. “HDR will come along, and we have been testing it and working with different manufacturers [with regard to] what that will look like.”

In the second half of the session, Strauss invited a number of leading OB service providers to outline their philosophies for the design and build of 4K trucks. In general, it became clear that the greatest point of difference concerned the willingness to implement IP-centric workflows simultaneously with 4K, or whether to wait until the remaining grey areas around IP have been resolved.

Telegenic was undoubtedly a trailblazer in the area of UHD vehicles, beginning work on its 4K-capable T25 truck in 2012. Curtin remarks: “At the time we were partnering with Sony because we were looking at the Confederations Cup in 2013 and decided to build a truck with a 4K backbone. [We worked on a truck featuring] Sony F55s and a Sony mixer, and we partnered with Fuji as well. We learned a lot, [returned home] and did more tests.”

With the arrival of the HDC-4300, “we decided that was better with regard to sports”, while the S-A-M Kahuna was determined to be the most appropriate switcher. But it was not felt that IP was the way to go yet: “OB is the dirty end of television; we are in and out, and we do not want to be trying to fault-find.”

In 2016, Telegenic has three UHD trucks in its inventory and “currently has no plans to build more, but that isn’t to say we won’t as the technology evolves.”

Turning to NEP, Turnbull reflected on the need for its new fleet to be able to service the ICC Test events. At that point, “we felt that IP was not proven [sufficiently to be able to do] what we needed to do on a weekly basis for Sky Sports.” Course duly set, NEP is rolling out four new UHD trucks, with the last due for completion in November. 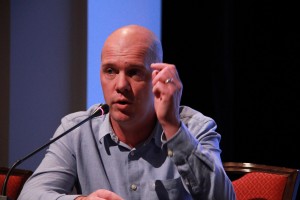 Telegenic’s Eamonn Curtin: “OB is the dirty end of television; we are in and out, and we do not want to be trying to fault-find.”

The Sport Production Summit session underlined the fact that each OB provider has a different angle on designing next-generation takes, so on behalf of Euro Media Meyvisch remarked that his team started with “selecting the cameras, and in the end we went with Sony. HDR is coming around and we knew that the Sony cameras would be capable of doing that; of doing mixed workflows. We then considered the lenses and chose Canon, and went further into the truck, selecting equipment such as the [S-A-M] Kahuna switcher…”

In terms of IP, Meyvisch implied that a pure focus on OB trucks as they are at present is necessarily helpful – instead, the emphasis should be on “the benefits of changing to IP, which is [that you have the ability to be] scalable and modular.” Hence there is a need to talk too about “remote production facilities, flypacks, build-outs… [All those areas] where IP becomes important.”

For Arena, Rees recalls that the design team began with the notion of “taking a regular HD truck for big events, with 30-plus cameras and replay cameras, and scale that up to 4K without losing any of the capabilities or horsepower of a big HD truck.”

As the development phase continued, it became clear that a number of manufacturers were pursuing a roadmap that mirrored “where we wanted to be”. Ultimately, in terms of “the efficiency of the truck and protecting the investment, [it was evident that] IP was a viable solution. And we went for it.”

Troubleshooting the IP-based infrastructure in its new 4K trucks – which hit the road earlier this year – remains a challenge, but that requires we “re-educate ourselves. [With IP] what is missing from the toolbox is a quick way of analysing and seeing where the problems lie.”

Bringing the session to a close, Lane noted that with “big challenges ahead”, due care and attention must be given to minimising additional stress to production and engineering staff. Personnel are “working under a lot of pressure to deliver content and there is an expectation that they will do [an equally] good job every day, so if they are worrying about the backbone that is a worry for me.”