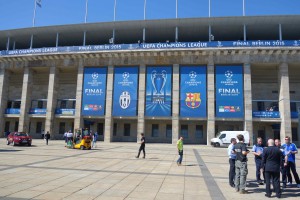 The Group stages of the 2015-2016 UEFA Champions League season kick off the week after IBC2015, ushering in a new era of second screen Next Generation Services to enrich the match-day content offering for rights holders in the 2015-2018 cycle – following extensive trialing with broadcasters at the UEFA Champions League Final in Berlin in June and formal launch at the UEFA Super Cup in Tbilisi in August.

NGS is a most complex operational and technical challenge for UEFA and its partners deltatre and EBU Eurovision, with venues stretching from ‘Arsenal to Zenit’; not all stadia yet equipped with dedicated fibre connectivity; and up to eight match coverage per night. This NGS challenge runs right across digital services, broadcast services, audio watermarking and content delivery.

Hugely successful in 2013 and 2014, the Sport Production Summit is once more a welcome opportunity to take stock of the latest industry trends and examine in detail the workflows involved with some of this summer’s leading tournaments. Comprising a diverse and illuminating selection of case studies and panel discussions, the summit provides an invaluable opportunity to meet the leaders in sport production as well as SVG Europe sponsors in a relaxed, informal setting.