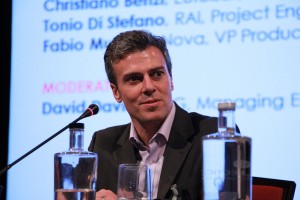 During this summer’s UEFA EURO 2016, RAI Italy became the first national public service broadcaster to offer a 4K/UHD premium sporting event to consumers with a compatible set. This tournament first was realised through RAI’s collaborative work with Eutelsat, V-Nova and others.

The project had a number of technical difficulties to overcome, including the necessity to add visually lossless low latency feeds within the existing 1Gbps connectivity already used for HD video, audio and file transfer. V-Nova P.Link 4K transported UEFA international feeds from the IBC at Porte de Versailles to Eutelsat’s Paris-Rambouillet teleport, where the signal was further edited and produced for consumers in Italy through RAI’s Tivusat satellite platform.

Tonio Di Stefano, RAI, Project Engineer told the Sport Production Summit audience in Amsterdam, “quite late in the spring, my sports rights boss said ‘hey guys, if you want there is the possibility of 4K rights for RAI – what is the situation?’ I said we would have to use satellite, as there is not enough space for us with a digital terrestrial approach. The reference market is the Tivusat freesat 4K television platform, with its set top box.

“OK, then the decision was made that we should start. We set up the project; five departments in my company were involved. Partners of course were Eutelsat for satellite, V-Nova with Perseus, Nagra for the conditional access, Elemental for the coding, and ND Satcom for other parts of the satellite [delivery chain],” said Stefano.

Cristiano Benzi, Eutelsat, Director of Special Projects said, “What is important is there was a commitment from a public service broadcaster to do something strong to exploit this new technology. It is normally pay TV operators who are first adopters of new technology. Why? They want to monetise it. ‘I sell you HD channels and you pay; I sell you Ultra HD channels and you pay.’ We are happy to have been chosen by RAI, and to have been part of this commitment.

“When we first talked to RAI they said ‘we don’t want it to be a test bed, a technological demonstration; we want it to be a real service to the Tivusat customers’. Of course we’re not talking about millions of people as 4K screens are not that widely deployed in Italy. The full reference universe for this service was around 150,00 with a 4K set and connected set top box; the real usage was more or less half of that, around 75,000 to 100,000,” said Benzi.

“We started to discuss this project in mid-May. We had to build a workflow, using quite scarce resources. The UEFA international signal was delivered to RAI as a rightsholder broadcaster. The amount of personalisation of the signal was extremely low. There was a separate commentary to the HD production as there was no way to re-use the HD commentary. There was a RAI 4K logo inserted, and a temporary ‘RAI 4K’ channel over satellite was created.

“On top of that,” said Benzi, “RAI wanted to do a complete pre- and post-match presentation, involving their journalists and so on. Of course the signal had to be encrypted as RAI is a rightsholder, and inserted into the Tivusat platform.

“How did we implement that? RAI concentrated at the IBC on the conventional HD production of the matches for the RAI Uno, Due and Tre channels in Italy. It was then necessary to do the personalisation of the UHD feed somewhere else. Where? Eutelsat has a teleport which is not very far from Paris at Rambouillet. There we received the UHD feed from the IBC and the pre and post show presentation contribution from RAI studios in Rome that had to be upconverted and inserted into the final programme,” he said.

“We decided to ask V-Nova with Perseus compression to help us to carry the UHD signal to Paris-Rambouillet where the personalisation of the signal was done. As a satellite operator we are not really in production; we receive and transmit channels, compression, embedding, multiplexing but not really production. That’s why we suggested the use of a 4K OB van with the necessary features. And that’s what we did; a DBW 4K OB van was parked at our centre for the duration, staffed by RAI and DBW personnel. The uplink was performed in HEVC to Tivusat,” said Benzi.

According to Fabio Murra, V-Nova, VP Product & Marketing, “this was an exciting project with a very short timeframe, as Tonio has said. It spanned from Rome to London to Paris, a very international cooperation where a lot of things had to come together quickly.

“We launched Perseus in April 2015,” said Murra. “We jumped at the chance when we were approached by Eutelsat for this project, as it was the perfect opportunity to demonstrate that we were ready for primetime. It was a little bit scary to be sure. So we are proud that we managed to deliver, and deliver well,” he said.