The management team that took the host broadcast operation for the Wimbledon tennis championships in-house will be among the speakers at SVG Europe’s Sport Production Summit in Amsterdam on 13 September. 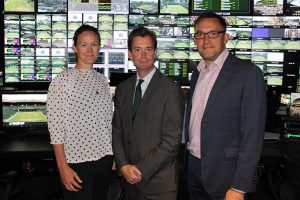 Head of Broadcast and Production Paul Davies (above, centre), Broadcast Manager Bethan Evans (above, left) and Broadcast Technical Manager Tom Giles (above, right) from the All England Lawn Tennis Club (AELTC) will take part in a panel discussion, chaired by SVG Europe Contributing Editor Will Strauss, in which they reveal what they did and why they did it and highlight some of the challenges they had to overcome.

Other topics on the agenda for Sport Production Summit 2018 include the FIFA World Cup in Russia, remote production and IP within outside broadcasting.

At time of writing, well over 500 people have registered for the event — registration is now closed.

The Sport Production Summit will take place on 13 September 2018 at the DeLaMar Theatre in Amsterdam.