Sport Production & Technology Summit 2021: NEP CTO Pete Emminger talks esports, attracting talent and why there will always be a place for trucks 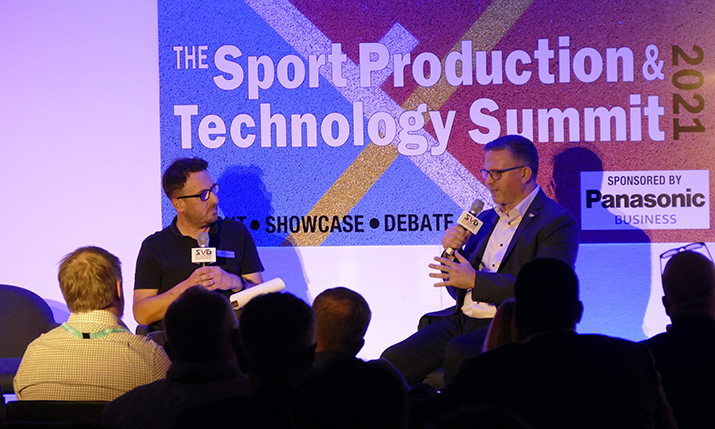 The newly appointed CTO of NEP, Pete Emminger, gave his first public interview since being appointed to the role in July at SVG Europe’s Sport Production and Technology Summit.

Emminger shares oversight (with CEO Brian Sullivan among others) of one of the main technical production partners in the industry yet as he told the audience, it is the people that count.

“It’s the astronauts, not the rocket ship which matters,” he said, speaking with SVG Europe editor, Will Strauss. “Investing in people is one of our priorities and that means ongoing training and forums to access new technology as well as diversity initiatives. If we invest in the right people, it will pay.”

Emminger is responsible for leading the global technology group, overseeing overall technology strategy, and technical design and build of its products and network operations. The group is also responsible for R&D and prototyping, supporting NEP’s ongoing commitment to innovation. Prior to his role as global CTO, Emminger joined NEP in May 2021 as SVP, product management for live production, where he focused on identifying and building strategic product plans for live production.

“When I was 18 I thought I’d be a theatrical set designer,” he explained by way of introduction. “If you think about it, the audience experience for that job is key to everything else I’ve done, including at NEP. I gravitated to the more technical side of projection mapping and film projection, and that progressed into a career in live events. My starting point is the content and then asking what do customers need to make that content for their audience.”

Prior to NEP, Emminger was at Blizzard Entertainment, where he built and led the Global Broadcast group, developing key internal capabilities at Blizzard in support of BlizzCon, Overwatch League and Call of Duty League. Prior to that, he owned a live event production company for 13 years.

“Esports is a hyperconnected environment where everything is interchangeable and connected and focused on enabling the audience experience,” he said. “Every live broadcast production today is connected to multiple locations. There is no longer a true air gap production. For example, a leg of the Extreme E race series took place in Greenland in one of the most remote and least connected places on the planet. After satellite backhaul we took everything as data over IP into our production control rooms in both London and the Netherlands to produce the live feed.

“Productions and production technology and networks are increasingly interconnected and that affords the content producer greater synergies in cost reduction and streamlined workflows and also huge opportunities to make more value from the raw material they generate at source.”

That said, NEP, which has its roots in outside broadcast trucks, doesn’t see any end in sight to on-site workflows.

“There will always be a place for trucks,” he said. “Yes, a lot of workflow is moving to the cloud but being onsite has a lot of value. We continue to make significant investment in our truck and OB fleet. We are designing this infrastructure to tie together in order to deliver on projects that require interconnection of multiple sites and multiple locations. We are designing trucks to be interconnected.”

“There will always be a place for trucks. Yes, a lot of workflow is moving to the cloud but being onsite has a lot of value”

He continued: “From vendors we’d like to see a continued migration from hardware-dependent solutions to software-defined ones that enable more flexible workflows. Additional production capacity is what content creators expect and we do too.”

Emminger also highlighted the current move to 100Gig networks “with 400Gig not that far away – maybe two to three years away – this [connectivity] is something we are looking at.”

Given Emminger’s esports expertise, Strauss asked what conventional sports could learn from its growth. “How exactly you link the live event with the broadcast is one thing that esports does better than most sports. It’s about having an environment where, when something happens in a game, you want the exact same action in the stadium and in the home,” said Emminger.

Perhaps synchronising VAR or TMO in venue with live broadcast can be improved. “For a lot of sports that is fairly disconnected,” he added.

What about transferable skills between esports and more traditional sportscasts? “There are workflows in esports such as game observers whose skills can transfer into remote camera work much more easily than asking a camera operator in broadcast to work inside a games engine,” he said. “They are different skill sets. That said, those in the traditional broadcast space conversant with interconnected graphics and third-party data workflows are much better at transferring those skills into esports where operators are used to heavily customised game data.”

NEP technology was and still is powering many esports live events, including at the Blizzard Arena in LA. “In NEP where we support major esports publishers, we try to move teams between projects,” Emminger said. “It happens organically and on a daily basis.”

This mix of interdisciplinary skills within the corporate environment is, for Emminger, key to attracting talent into the industry. “Ongoing diversity initiatives will also help, but I find that what works most of all in terms of talent retention is to be fun. You can forget about having fun amid all the pressure, but if it’s not fun, why do it? Likewise, if you’re not interested in sports why do it. I happen to think sports is a lot of fun.”