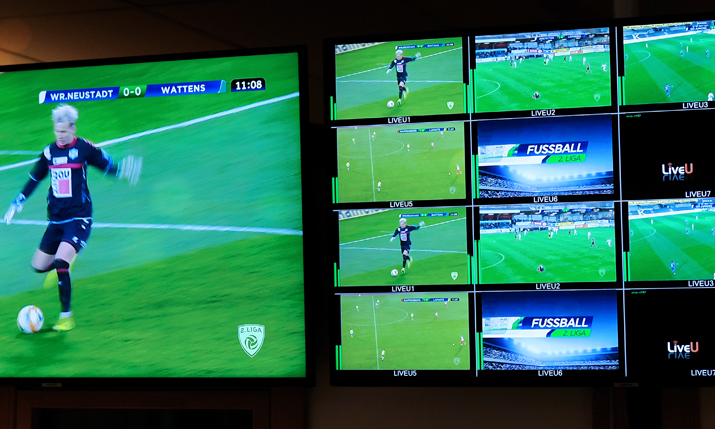 Working with the LiveU LU600 HEVC units alongside the associated LiveU Central management platform and LiveU MultiPoint solution for content sharing and distribution, Sportradar is producing and distributing all 240 matches this season for Laola1.tv. The technology was supplied by LiveU’s Austrian partner, ETAS High-Tech Systems.

Sportradar Media Services is the audiovisual production arm of Sportradar, providing contribution, production and distribution services for both online and linear broadcast TV. It operates the Laola1.tv international sports channel and OTT platform, which is Austria’s top sports portal.

Christoph Reiermann, production manager for broadcast at Sportradar, told SVG Europe: “With Laola1 and Sportradar as rights holder and TV partner, the league gets production and live coverage for all 240 games per season, along with distribution on TV, OTT and online — which is more exposure than before.”

“Additionally, Laola1 with Sportradar provides highlight production of all matches, an online content pool for all clubs, referees and officials, and much more.”

Reiermann commented on the challenges in creating this solution for the Austrian Football Second League. He said: “The main challenge was providing all stakeholders involved with reliable live coverage of all matches in broadcast quality with minimum latency and without exceeding available budgets. These are a very difficult group of obstacles to overcome, but working with LiveU we’re able to achieve these goals and satisfy everyone’s needs.”

“The main challenge was providing all stakeholders involved with reliable live coverage of all matches in broadcast quality with minimum latency and without exceeding available budgets.”

Continuing, Reiermann said: “Since Summer 2018, Sportradar Media Services has been the exclusive rights holder of Austrian Football Second League for linear and non-linear distribution worldwide. Laola1 and Sportradar hold these rights for the next several years, so we’ll get the opportunity to broadcast many more games moving forward.

“In order to be able to provide the level of coverage, dynamism and flexibility that we wanted, at a cost-effective price point, we looked at cellular bonding. We tested many different systems and found that LiveU was the most capable of delivering a very stable signal with great image quality even at low latency. ETAS has also provided strong support,” he concluded.

All production crews are equipped with LU600 HEVC units. Up to eight simultaneous feeds are transmitted to the LiveU servers in Sportradar’s Master Control Room (MCR) where the feeds are then further processed; live commentary is added, content is encoded for live streaming as well as handed over to playout for linear TV. While all matches are available live online on Laola1.tv (www.laola1.tv); at least 30 matches are shown exclusively on Laola1TV (OTT and linear TV) and another 30 matches are broadcast on Austrian TV.

Sportradar Media Services is also using LiveU MultiPoint to easily share feeds with other content takers around the world. MultiPoint seamlessly integrates into users’ daily workflows, allowing them to share incoming live feeds with multiple end-points from within the same LiveU Central interface they work with daily.

Zion Eilam, regional VP sales, EMEA, LiveU, said: “Our reach across the sports production market continues to grow as the performance, flexibility and cost effectiveness of our product family is even more widely recognised. This project with Sportradar Media Services uses a wide range of LiveU technology to create the volume of content that they need and share it easily.”