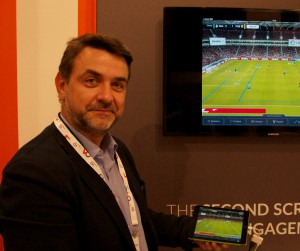 Mauro Margenat with VirtualArena: “Take up is 30% higher than expected”

Barcelona-based Mediapro has leveraged its work in sports analytics for clubs (using its Mediacoach system) to provide information and graphics for broadcast and second-screen use, with its app, VirtualArena now in use in Spain for football. Mediacoach was originally developed in 2010 for football professionals, and has been deployed in all 42 first and second division clubs in Spain, where it integrates video analysis technologies with physical and tactical data.

The system links to six tracking cameras (from ChyronHego) and uses video stitching to create a panorama. The software then does its analysis on this and synchronises all the data with the video. It can also be used to automatically create highlights from the tracking data, and could also output an EDL for broadcast use.

It can do analysis on multiple matches, producing full season reports and comparisons, and is claimed to be the only tool that synchronises multiple video feeds (panoramic, TV and any other external feeds) with physical events and tactical data. The cloud-based system also offers plug and play compatibility with Opta and ChyronHego data, and can be customised to club or competition requirements.

“This was very good for coaches and technical staff, but we wanted to use the data to involve fans with the game,” to offer them information based on that data, said Mauro Margenat, managing director. “Because we have the tracking cameras and data in all 42 stadia, we are getting the data live.” The resulting product is the Spanish second-screen app for iOS and Android, La Liga VirtualArena, which tracks the performance of teams and players in Spain’s top two divisions in real time. It can be downloaded from the Apple App Store or Google Play.

It was launched this season for the Spanish league, and Margenat claims it is the only system on the market that allows fans to view action on a live virtual arena, with all the tracking data from the Mediacoach system.

“We are able to produce the virtual live representation of the game with only seconds of delay” — about 15 to 20 seconds currently. Users can view avatars of the players on a map of the pitch, although due to rights issues in the Spanish league this is confined to a top-down view. If rights allowed elsewhere, it can have up to five angles — from either side, or each end (behind the goals), as well as top-down.

Users can view each team’s defensive and offensive lines, and can select groups of players (such as defenders) to see how they move, and show a heat map of where play is happening. It can also display players’ performance stats, such as shots, passes, saves, or even where they placed previous penalties in each area of the goal, plus rankings of shooters, distance covered, duels won, etc., to allow users to compare players.

Its overall player rating system, The Index, is based on a mathematical calculation that takes into account 32 objective variables, and tracks all 22 players on the pitch, their position, speed, etc. It allows users to highlight and compare various aspects of the game, such as defensive performance, play building, finishing, or disciplinary conduct.

It also provides such tactical analysis tools as off-side lines, play lines and distances, width and depth of the play, distance between selected players, etc., as well as marking all of the major match events (goals, bookings, cards, substitutions, etc), which users can easily jump to.

Besides following live matches, video highlights from each game are available a few hours later, and users can view games from the archive.

In Spain it is a freemium app, in that standings, scores, video highlights, news, and Mediacoach scores for all players in the league (useful for a live fantasy football league) are free, but the virtual arena and live stats cost extra. The advertising hoardings in the virtual stadia can be sponsored, for another income stream, and the app could be set up for different rights holders so that it is only for PayTV subscribers for one league, or completely advertising supported for another. “We have realised that once we have deployed VirtualArena in a market, a good option to commercialise it will be to sell personalised environments for sponsors,” he said.

Mediapro’s sports channel, Gol Television, is currently using statistics from Mediacoach as well as VirtualArena graphics in its match coverage and some of its other programmes. “We are about to sign our first agreement with radio and take up [of VirtualArena] is 30% higher than expected,” added Margenat.

Its probable use for radio is an interesting application, as it would allow the radio commentary of a match to be synched with VirtualArena via the internet, so that listeners can follow the action virtually on screen.

Mediapro has also received a lot of interest from broadcasters in Europe, as well as some from Asia, Africa, and America, and is now negotiating with organisations in some of Europe’s other important football markets “and expect to close some deals by the beginning of next year,” he said. It has also been asked to do a rugby version of the system.