Sports Anti-Piracy Summit lays out the challenge and offers solutions

Mariano Elizondo, president, Superliga Argentina, said that, if the industry does not come together to fight piracy, the future of soccer and all sports activities will be threatened.

“We need people that see content to pay for it,” he said. “Otherwise, the rights have no value, and then the players, coaches, and others cannot be paid to the same level, and the broadcasts won’t have things like 18 cameras.”

Carlos Del Campo, deputy president, La Liga, noted that La Liga has a team of 18 “good hackers” who are creating computer programs to battle piracy. “And they are working 365 days a year, 24 hours a day because we have to protect our product.” 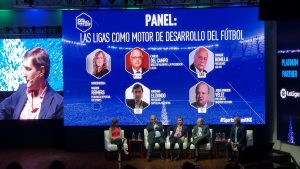 million TVs are tuned in to watch matches in Colombia but about one million of those subscribers are watching illegally. The league is working with the Colombian government to solve piracy issues, but there is also another type of pirate, which gets less attention.

“When we launch our premium channel,” he explained, “there will be bars and restaurants that will sign up as homes rather than commercial establishments. They should have to pay differently as they profit from our league.”

Steinmetz highlighted Fox Sports’ efforts to stop the piracy problem from expanding. Consumer education, he said, is the most challenging and important pillar in fighting piracy. He cited a study conducted in Brazil pointing out some of the key myths around consumers who pirate content.

“The first point is that those who do online piracy do not feel like criminals,” he said. “It also has nothing to do with age or social condition: it is a horizontal issue. So how can we convert them into legal consumers?”

He sees the issue as one that confronts everyone in the industry and can be solved only by a strong collective effort involving all parts of the industry. “Individuals score goals,” he opined, ”but teams win games.”

The need to address piracy, he added, will only become more important in the future, because deployment of 4G and 5G services across the region will make it easier for consumers to pirate content directly from a device in their hands. Piracy could double in the region, he warned, if protections are not improved.

One major issue? Technology is both a friend and foe. “Technology is defeated by technology,” Steinmetz said.

He also noted non-technical issues, which he summed up as “follow the money.” Pirated sites, for example, often get exposure for their illegal sites and services by placing them on legal websites, giving the service legitimacy to consumers.

“The auction system for internet advertising is not discriminating if the service is legal,” he said. “We are now working with agencies behind the complex of online advertising to eliminate those websites that are offering content without having the rights. And we are working with those who own the ad servers that upload the content, as well as those who process payments for the illegal accounts.”

Another financial issue is the role of e-commerce companies that often sell appliances like illegal set-top boxes.

“There is a memo of understanding to develop algorithms to detect, in real time, those offers for products and content that are illegal, so that they can be dropped by the e-commerce platform,” Steinmetz said. “You have to cut the grass every day in the garden.”

There is also a need for greater enforcement of intellectual-property rights. Last year, he said, there was a crackdown on a site that had been hacking content illegally, with 10 people arrested. Two days later, however, the site was back up and running.

“Legislation is an important issue, but current legislation in some countries goes back 40 years and can’t deal with the current reality of online hacking and piracy,” he said. “Legislation can’t keep up because the technological hare of piracy runs 10 times faster than the legislation process. The industry needs to adjust to that reality.”