James Pallotta, president and chairman of AS Roma (and also co-owner of the Boston Celtics), took to the stage at the Sports Decision Makers Summit in Miami last week to discuss how the Serie A football club is using media to connect with its own fans as well as to make it a leading “second favourite” team for football fans around the world.

Getting a fan of a Premier League or Bundesliga team to change allegiances and root for AS Roma may not be impossible, but the goal of being a second favourite club is attainable. And media is the key driver. 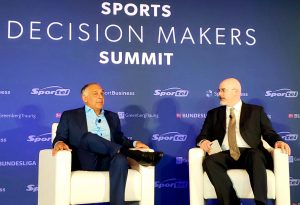 “We produce seven hours of original video content, which is the most of any club. We also have our own TV station that has six million subscribers, so the TV side has been great,” Pallotta said.

“We also bought a terrestrial radio license as there are nine radio stations in Rome that only talked about Italian football and they would make up shit all day long. So I got tired of it, bought the radio station, and now three of those nine are bankrupt, and we have six to go.”

AS Roma also has the highest level of Twitter engagement on any European football team, according to Pallotta, and, alongside Bayern Munich, the team is consistently viewed as the best on social media. He noted that the website has also been a winner.

“If you go to a lot of team websites, the first thing you see is 50% off of merchandise. Things like that cheapen your brand, so we don’t do that,” he said. “We also crowdsource a lot of things from talented fans who do things like send in their own designs of logos or merchandise.

“Soon,” he continued, “we plan to curate those designs and ask if [fans] want to buy a hoodie or T-shirt with their design on it. It takes no money to do on a capital basis, and then we can ship it to them and do runs from one item to millions.”

Pallotta also discussed his club’s venue plans, which he says will include a new stadium seating 54,000 people on a 200-acre piece of land located along a river, near two train lines, and inside the ring road.

“It’s a great space, and it will be the most-used stadium in all of Southern Europe,” Pallotta said. The hope is to have approvals wrapped up by June and then to open the stadium in mid-2022, creating a new place not only for the team to play in but for partner AEG to hold music festivals and more.