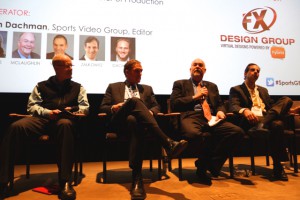 Advances in virtual set technologies have led to more cost-effective and reliable solutions for broadcasters, making the days when an investment in a virtual set was a risky move a distant memory. “Virtual sets are now in a price range where, if the audience doesn’t like it, it’s not going to cost you your job,” said Mack McLaughlin, CEO/creative director, FX Design Group, during a panel discussion on virtual sets at the inaugural Sports Video Group Graphics Forum on February 25 in New York. “More and more broadcasters are adopting it, using it, and growing into it.”

Orad Director of Sales Bob Valinski noted that United States broadcasters tend to embrace a hybrid model where real sets meet virtual sets. For example, Orad technology can power as many as 16 monitors placed virtually within real sets and, thanks to the horsepower, without more than two frames of delay.

“They see the benefits of virtual but are not totally trusting, so, for example, Sportsnet in Canada has an LED wall and floor instead of green screen,” said Valinski. “They have separate 4K images tied together for a virtual environment so that the camera can zoom in and not have it look fake.”

One challenge with virtual sets is making sure that depth-of-field shading is used so that, as the camera zooms past the virtual element, it looks as realistic as possible.

“You need to tie into the lens parameters to keep it all real,” Valinski said. “The goal is to get it to a point where the customers can’t tell what is real and what is virtual.”

Boston-based NESN exemplifies that success. It has a virtual studio that has a 20- x 20-ft. green screen within a set that is 40 x 50 ft. But, thanks to virtual technology, it appears to measure 150 x 100 ft.

“Joseph Maar [VP, programming and production, NESN] reimagined our news show and partnered with Unreal to create a New England warehouse that is hyper-real with brick, iron, and glass,” said Howard Zalkowitz, director of production, NESN. “The only way it could be more realistic would be to have a 6-ft. snow bank.”

He noted that the move to virtual involved 18 months of planning and today the set is used for three shows a day and about 500 hours a year of programming. That large amount of programming makes it easier to amortize the cost of the set.

“Fans want tempo and pace, and we can do things like spray-paint a virtual logo or put a newspaper headline on a wall,” Zalkowitz said. “And those narrative tools allow for the pace and temp to be quick-hitting.”

One challenge for NESN is that, because the teleprompters are mounted on the main camera jib, the production team needs to be careful about moving it quickly or to a position where the talent cannot see it. “The talent is conditioned to know where they can go and what maneuverability they have,” he said.

Ross Video Creative Director Paul Lacombe discussed one of the more recent big-time uses of virtual technology: during NBC’s coverage of Super Bowl LXIX in Phoenix. “It was a great feather in the cap, and we were able to accomplish what they needed,” said Lacombe.

A tight timeline required the Ross XPression real-time motion-graphics system to be integrated with a ChyronHego graphics engine. “One of the benefits of XPression is tight integration with video playback, as 3D graphics and video can be intertwined and seamless,” he said. “We took the graphics into a virtual environment, and part of our culture is to be open and working with partners in a friendly manner.”

Many of the recent refinements in virtual technologies can be credited to the videogame industry, along with advances in the NVidia hardware platform that uses OpenGL (Open Graphics Library) or Microsoft DirectX programming interfaces.

Lacombe said that choosing the best keyer is an important step to ensure a realistic look, and he stands by Ultimatte as the best keyer out there, especially with respect to lighting, shading, tracking, rendering, and, of course, keying to create a photorealistic environment.

He also said it is important to make sure that realistic textures and even things like virtual grunge where the walls meet the floor can make a difference because the human eye can very easily identify things like improper shadows as fake.

“Things like global illumination and techniques from the film world have trickled down for hyper-realism,” Lacombe added. “And then things like depth of field and deep focus have trickled up from the gaming industry.”

The advances in technology, said McLaughlin, are why designers today find themselves in a golden age. “They are no longer constrained by studio space, and they can design a greater set.”

For example, FX Design Group was able to create a virtual-studio environment for Back9Network, a golf-lifestyle network, from conception to on-air in 90 days. The studio has three virtual sets powered by Krypton engines, three robotic cameras, a jib, and one hard set.

“There are two new engineers,” added McLaughlin, “and we did a lot of training in a short time.”

In the end, use of a virtual set takes a leap of faith on the part of the production team and even the viewers. McLaughlin mentioned a study from Frank N. Magid Associates a couple of years ago that found that viewers did not trust an anchor working in a 2D virtual environment but that, in a 3D environment that did not involve movement, they trusted the anchor more than on a real set.

“The audience is ready to accept it, and they believe in it and trust it,” he said. “So now it is just a matter of getting the people that sign the checks to trust it. But virtual is here to stay.”