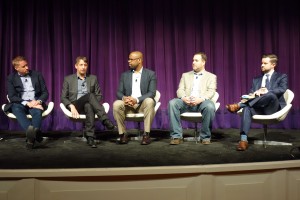 In a wide-ranging discussion around production innovation, some of the key topics raised were Dolby Atmos, 4K replays, how the panel currently views VR, the exciting potential of HDR — and the fact that in sports production nothing ever stays the same!

Darryl Jefferson first told the audience that NBC Sports has “just completed the Rio Games this past summer and we’re working now on integration for the PyeongChang Games in 2018 — and we also have the Kentucky Derby coming up and are in the middle of the Stanley Cup playoffs with the NHL. Next year we’ll have the Super Bowl in Minneapolis, the Winter Olympics in South Korea starting four days later, and then Spanish-language coverage for the World Cup in the summer. So, a busy year ahead for 2018!

“With sports and technology we always look ahead, rather than grousing about what could have been better and what have you,” said Jefferson. “The big deal with the Winter Olympics for us is; we also have day jobs! We have other events going on, and trying to make sense of that [production] with no new people and no new tech is challenging.

“We call it at-home operation: when you have two huge events like the Super Bowl and the Olympics four days apart, there’s no way to really push a workforce that far globally. We try to do as much as we can from our fixed place at home, and then kind of pivot from event to event. Those workflows that we have used for previous Games just intensify – it seems like it multiplies each time,” he said.

“We are going to be sending a good number of people to the IBC and to the venues at PyeongChang. There’s only one direction: everything gets bigger and bigger. But we can do more at home where we use all the control rooms and all of the studios, and we broadcast out from there. We build up and build on. And in the social area, more and more people from Buzzfeed will be along [to PyeongChang] for the ride again and we’re excited about that partnership,” said Jefferson.

Brandon Costa asked BT Sport’s Andy Beale to explain to the audience how it has been progressing with Ultra HD production – and in particular the broadcaster’s recent experiences with Dolby Atmos. “We launched UHD in the summer of 2015,” said Beale. “At the time it was parallel production, with two trucks. Shortly after that I sat down with my colleagues and we said ‘it’s all about passion and getting closer to the action’, and sound – as every moviemaker knows – is possibly more important than pictures in terms of setting the scene.

“So we approached Dolby and ran some trials with Dolby Atmos: we were very excited to do a proof of concept demonstration with Dolby at the SVG Reception at IBC2016 – in fact on the same day as we launched our new [Arena] IP UHD truck!

“Then we launched Dolby Atmos live at the end of January, with the Liverpool v Chelsea game,” said Beale. “When the Liverpool players walked out of the tunnel the fans were singing ‘You’ll Never Walk Alone’ and the hairs on the back of your neck stood up. Even our commentator said, “Let’s just stop and listen to the Liverpool fans”. It was a palpable sensation.

“It’s been a really great experience. We’ve also introduced Dolby Atmos on rugby, for European Champions Cup games. We’ve also done boxing, where you really get the emotion and energy of the ring in a closed arena with the crowd cheering their fighter and the music playing: it does provide a sense of occasion, back from the venue to the home,” he said. 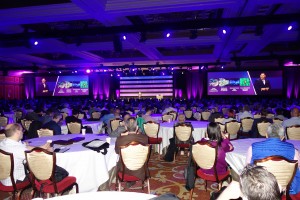 As one of the leading UHD broadcasters in the world, with two full seasons of production under its belt, Costa asked Beale to tell the audience what have been the biggest challenges faced to date and what major obstacles lie ahead in the further implementation of the UHD production chain.

“We learned first of all that having two production teams was not sustainable,” said Beale. “For the viewer, they want to watch on a TV or a device and they don’t understand why there would be different sets of production values. For us, to have a single production is really important and we’ve worked closely with our live sport partners and have had great support from UEFA, the Premier League and the European Rugby Cup. We’ve done over 250 UHD productions since August [2016], including hockey, Moto GP and others.

“The one bit that is still not quite there is the [4K] replay,” said Beale. “It’s frustrating, I have to say; there’s a big gap in the market there, waiting to be filled. We’re hoping to see some key announcements this week at the show, because for me that’s the one piece of the jigsaw left – that workflow piece that is so important. For fast turnaround areas like sport, 4K replay is not as easy as I think it should be,” he said.

How Super Bowl LI moved from Houston to the cloud

Noah Gusdorff described the role his company, Creative Mobile Solutions, played at this year’s Super Bowl in Houston. “Fox came to us and said ‘it’s cool how you built on what you did for ESPN, now we want to do something bigger’. We said ‘awesome, we love a challenge!’

“We needed to integrate all of the Fox production locations: the stadium, the Discovery Green location where they had all of their studio shows; Minute Maid Park where they were doing interviews and Press day, and so on. We had a fully redundant ring network of 10 Gig going around the city of Houston. We had multiple backbone providers and multiple private connections into the Fox network that were all coming through our fully redundant, managed system.

“I can tell you, redundancy definitely works,” said Gusdorff. “There were a couple of moments where we would see certain parts of the network performing and other parts not performing, but the users at the edge never saw a difference because of the way our team engineered and built everything.

“Across the city of Houston, an editor or a media manager had no idea if the media was 10 feet away from them on a server or if it was 25 miles away on the other side of the city. That was converging into the cloud, and folks back at their network centres on both coasts were working with the footage.

“So we’ve really been building the network and management backbone to be able to move all sorts of files faster and really bring all the vendors together. We can now take anybody’s network without really having to modify the way their truck or flight pack is running, bring it into our world, and merging it all together.”

Which innovations will drive the business in 2017 and beyond?

To wrap up the session, Brandon Costa asked his panellists what they are currently excited about, in terms of new technologies that could move the industry forward. “I think probably for us the next thing is VR,” said Andy Beale. “Where is the opportunity with VR? There’s no doubt there’s something there, and it’s important that we don’t just do VR for the sake of it.

“The danger of VR is that someone picks up a headset, doesn’t really like it and just drops it. So we’ve been very keen to do something that would bring life and value and have a purpose. We’ve done lots of tests and experiments, and a key value for us is in boxing. You’ve got a nice small area, and you can put a camera in both of the neutral corners. That takes you to a position that’s unattainable anywhere else. It works really well.

“We did it for the first time two weeks ago, and to see a fight up that close is a fantastic VR experience. For the Champions League Final in Cardiff we’re planning some live [VR] cameras. We won’t be putting cameras out for the sake of it; VR has got to be engaging and has must bring value to the viewer. Then VR will be a worthwhile addition.”

According to Avid’s Ofir Benofici, “People have memories from the stereoscopic 3D adventures. That’s still in the back of people’s minds. But yes, VR is definitely one of the things that is coming along. We’ve been engaged with VR, for example for the recent Super Bowl. I don’t think it’s going to take off as fast as some people may hope, but I think it’s going to become more and more integrated into production.

“The second thing is UHD,” said Benofici. “Developing UHD from the early starters like BT Sport into conventional day to day production is one of the main challenges we’re going to see coming in the next three years or so.”

For Darryl Jefferson, social media and HDR are key innovation areas. “We’ve seen a growth in social media around the use of video, and it only matters if it brings more value or brings people closer to the event. We will see more and more integration with social,” he said.

“I’m also excited about HDR. When you see these amazing images with the colour spectrum so vibrant that you can really see the difference with either 4K content or 1080P content, it’s just really impressive.”

Noah Gusdorff said, “I love the way technology is converging now onto a common IT backbone. That’s where we were hoping it was going to go a few years ago when we made some major investments around data capabilities and networking technology, allowing us to adapt to whatever challenges our clients bring us.

“The thing I love about this industry that really keeps me going is, you never do the same thing twice. As soon as you install a solution and you think it’s great, you’re about two years behind and you’ve got to start building again! I’m excited about the next challenge,” said Gusdorff.