SVFE 2018: Towards the future of fan engagement 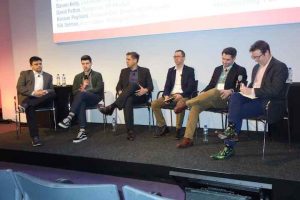 A key panel session at the Sports Venue and Fan Engagement Summit in Amsterdam on 8 February was entitled ‘Even Closer to the Action: the Future of Fan Engagement’ and was chaired by Roland Hemming, founder of RH Consulting. The session commenced with panellists commenting on the current landscape for venue connectivity.

Hassan Peymani, director and co-founder at Volcano City, stated that while connectivity to stadiums is still a contentious issue, it is necessary: “From our point of view, connectivity is a serious issue, but connectivity begets a smart stadium. For our company the element of connectivity is important from the perspective of fan engagement.”

Ryan Jespersen, regional manager for EMEA at Wowza Media Systems, added: “Most consumer devices, if not all, cannot consume multicast content so we work with technical partners within stadiums, such as Cisco, to scale unicast content in an intelligent way.”

Meanwhile for Steven Kelly, senior user experience manager at Ostmodern, his company has worked with Arsenal Football Club extensively on the issue of fan engagement. He noted: “We’ve worked with Arsenal for some time on this. For us it’s about engaging and mapping the whole fan experience at home during the week, as well as in the stadium.”

He continued: “At the moment we’re thinking too far past the fans; we’re saying we can deliver this tech and this tech, but we’re not looking at what the fans actually want.”

Regarding content opportunities and what type of material is the most in-demand from consumers, Selman commented that replay of matches is always the obvious choice. Yet he went on: “It comes back to that term of authenticity.”

“Content that feels very behind the scenes and personal [works best],” Nik Selman, managing director at Formidable, said. “It offers a viewpoint you cannot see from your seat in the stadium or at home. England Rugby do it very well. It’s all about a constant conversation that goes on throughout the week, not just in the stadium on a Saturday, and that’s what you need to remember.”

Jespersen agreed, stating that content had several uses, including tempting fans to stadiums to engage with a ‘VIP’ experience of content, as well as engaging them when they were outside the stadium.

This led the panel to the question of how do you know where fans are consuming content, and how do you discover what they actually want to consume? The panel discussed Bristol City Football club, which had been a topic of conversation in the previous panel for the fact it has said it is not prioritising Millennials (people aged 18 to around 28) as it does not believe they consume its content, and instead is concentrating on children aged seven years and up for content engagement.

On the sense of this strategy and whether Millennials are being ignored generally, Peymani said: “I don’t see Millennials as a lost generation.” He pointed out that you need to know where people of different ages have their eyeballs: “You can get the attention of 12 year olds if you communicate on Snapchat, but if you’re trying to attract eight year old girls to play netball, you don’t use Twitter because they won’t be there.”

Jespersen agreed: “You choose your loyalty to your [football] club early in your life. Perhaps Bristol City just wasn’t a big enough club at the time those Millennials were choosing their clubs; maybe they are consuming content, but just not Bristol City’s.”

Selman noted: “If you’re a [football] team in the lower leagues, you have to work very hard to generate content for the first few months or even years [of a content strategy] to attract fans.”

Extensive research with Arsenal Football Club has provided Ostmodern with insights into the idea of how fans around the world want to interact with their club’s content to work out a content strategy. Kelly explained that many members of the Arsenal fan base are overseas, so the company looked at a large group of fans in London UK, the US, and Indonesia to see how their perceptions differed. Among the findings, it turned out the fans in Indonesia wanted to feel part of the club, so they were looking at the club’s website and history pages frequently. However, the London-based fans only used the club website to check if it had genuinely signed a player, for instance.

In conclusion, Kelly stated: “So what does regionality mean? What are the differences in what fans want in different regions, and how do we target them?”

It is important not to irritate the consumer, both in terms of content provision and advertising, commented David Patton, vice president of product at Supponor. “It’s about authenticity and respectfulness. In the US people are finding that by trying to monitise or over-monitise what they’re broadcasting, they’re actually driving fans away. Fans want to watch the action, not be distracted and have cuts to advertisements every 20 seconds.”

‘A new voice’ for fans

Referring to virtual reality (VR) as one of the culprits of tech use gone wild, Jespersen said: “It’s very important to look at technology and say ‘is this right for our content strategy and content ad strategy?’.”

Selman added: “Fans have found a new voice. Now they can talk directly to other fans on YouTube. A lot of that started as single-camera Vlogs where they would rant and rave, and some have grown hugely popular and expanded to other sports or to [friendly sports panels] like Goggle Box, so you feel like you’re watching the game with your most well-informed, favourite friends.”

Clubs could tap into the social media strength of fan Vloggers out there, Selman said: “Arsenal Fan TV is the leading influence on what’s happening out there. There needs to be a compromise though.” Referring to the colourful language used on Arsenal Fan TV, he said: “Fan TV needs to smooth some of the edges of what they do, and the club needs to take a risk. Arsenal Fan TV content is so influential even non-fans watch it.”

Back to VR and augmented reality (AR), the panel concluded that AR was the most suited to in-stadium engagement. Selman remarked: “Major League Baseball’s At Bat app in the US is already trying AR [with Apple]. If you hold your phone over the guy about to hit the ball, you get stats about him on your phone. Because AR is less disruptive [than VR, which is fully immersive], it is more valuable in-stadium, adding another layer to the game. VR will be the best way for people at home, one day, to watch the game, because it will be like they’re there.”

However, Patton noted: “VR is an angle which we will keep an eye on because it’s interesting. But for engaging a fan who wants the stadium point of view, what will they do? Watch the game [in VR at home] for 10 minutes, then feel dizzy and lay down in a dark room with a cup of tea for a while. Is that what people really want? The idea of mixed reality (MR) is interesting though.”

Concluding the session, Peymani commented: “For tier one clubs, ultimately what they do will trickle down [to lower tiers]. They have a 360 degree marketing platform in terms of their brand, and if you understand what fans will do, clubs will [profit].”

Kelly added: “It’s joining up the dots to start with, making sure it’s not about the technology; it’s about what fans want and enhancing that experience.”