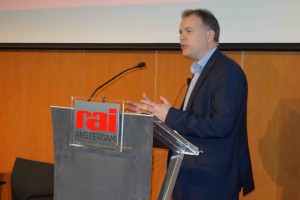 New methods of engaging fans near and far is a constant preoccupation of football clubs at all levels, and in all leagues. At the Sports Venue Technology Summit 2017, which took place during ISE in Amsterdam, Derby County FC CTO Stuart Fisher gave some valuable insight into the club’s latest projects in this area.

As Fisher observed, it wasn’t too long ago that attention was primarily focused on “playing football, with the fans turning up and watching it! That was the experience then, but [more recently] it has grown to be much more than that.”

This is due to a fundamental shift in the way – and the extent – that club engages with new technology. “That entails technology to increase the players’ skills and abilities, as well as solutions that can give fans a real experience. [The extent of the innovation] is such that often the joke in the club that we will spend weeks putting technology into the club then happy to play football on a Saturday!”

In terms of broadcast coverage and production at the club, Derby County FC is both looking to working innovatively with its rights holders, such as the Sky and BBC, as well as “create and own content” under its own steam. “So we have been putting the technology in place that allows us to give fans that [special experience],” says Fisher, alluding to a sustained programme of invesment in recent years that has included the acquisition of equipment such as NewTek’s TriCaster 855 live production system (https://www.svgeurope.org/blog/headlines/newtek-helps-derby-county-fc-to-boost-revenues/).

In terms of collaboration with broadcasters, he points to a recent request by the BBC to “put a camera in the dressing room so that it was possible to listen to the manager talking to the players. This was a fairly straightforward thing to achieve, but the level of coverage and fan engagement was huge.”

Consequently, says Fisher, the aim is to “constantly innovate and finds those twists and turns… It might not always be the latest and greatest technology, but it provides [a further dimension to the coverage].”

While the stadium’s 38,000 (max) visitors remain integral to the club’s concerns (“we cannot lose a seat” in terms of engagement), “we also have more than 250,000 fans watching over social media each week. So there is a continuing focus on maintaining that fan engagement.”

Fisher also documented the extensive activity taking place around real-time player tracking and analysis, which has involved developments such as the permanent placement of multiple cameras at the training ground, and has generated huge amounts of data about player performance to feed both training activities as well as conventional and OTT broadcast outlets.