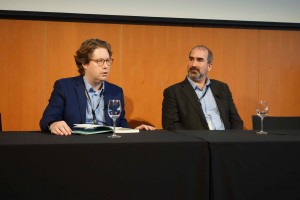 The closing session at SVG Europe’s Sports Venue Technology Summit – which took place during ISE in Amsterdam recently – examined the emerging technologies and evolving ideas about aesthetics and design that are feeding into the creation of new sports venues worldwide. The panel was moderated by RH Consulting founder/principal Roland Hemming, who also chaired the Sports Venue Technology Summit.

Participating in what proved to be a lively and insightful session were: Bob Kronman, director of Kronman Associates, which has managed and maintained some of the largest global LED projects worldwide – including London’s Piccadilly Circus and New York’s Times Square – since its formation in 2010; and Philip Johnson, senior principal at global architecture and design company Populous, and prime mover behind the development of the London 2012 Stadium (now the London Stadium) and the redevelopment of Ascot Racecourse, among many other headline projects.

Surveying the many emerging venue technologies, Hemming asked the panellists at what point new technologies tended to become a consideration. For Johnson, the “primary aim with any project is to understand what the client is trying to achieve. Sometimes there can be a brief that runs to hundreds or thousands of pages; at other times they have no real idea, just a basic thought of how a project should proceed.”

In terms of design, materials and technology, then, the role of Johnson and his team is “to interrogate everything. I sometimes describe architects as being like conductors of an orchestra; they can’t do anything without everyone else participating in the process. So the key thing [from our perspective] is to make sure that the brief covers everything that the client is trying to achieve with regard to technology.” Sports organisations may on occasion be “completely unfamiliar with what technology is out there, so they need to take advice from experienced people”.

Kronman highlighted the dramatic acceleration of screen technology developments (“4K, 8K, even 12K?”) and the challenges that will be involved with screen sizes, data paths and other considerations. But one of the problems at present is that “often we meet the architects [too far on] in the process. The earlier we can get together with architects and examine issues such as [positioning, power consumption, etc]”, the better, he said.

Johnson concurred that dialogue at the earliest stages was certainly preferable, although there can be no denying the current pace of change. “It can often take 5 or 6 years from [initial discussions] to the completion of a building, and technology moves so fast that the systems you eventually implement may not even exist when you start the process,” he remarked. “You also have to remember that the building may last 50 or 60 years, although certain components may have to be replaced several times during the life of the building. No one wants to spend hundreds of millions on building to get a botch job [that then requires substantial overhauling], so you have to build in a lot of flexibility.”

Despite these many – and increasing – requirements at a fundamental design and build level, there is also a needs to prioritise aesthetics. “When the visitors walks in to the venue they need to feel that it is ‘home’,” said Johnson. “And that’s not just [existing technology like big screens] but also virtual reality, augmented reality and all these other things that are coming in the future.”

Twenty years ago, he added, the venue owner might simply require a basic scoreboard – but now a standard design can encompass elements such as “video replays, perimeter banners, concourse TVs, 4K production, delivery of content [to various platforms], emergency broadcasting.” There are countless considerations to bear in mind, although three primary requirements – that the visitors “be able to hear what is going on, to see what is going on, and to feel what is going on” – should underpin all developments.

The extent to which visitors’ smartphones should contribute to the overall venue experience remains a matter of debate. Certainly, the days when sports lovers were happy with “a seat, a burger, a beer and a view” (in Johnson’s words) are long gone; they will often be checking their phones for replays or additional content while they are watching the event itself. But there is also a case for a decent balance to be struck so that the ‘match day atmosphere’ is uncompromised.

“People are there for the collective experience, so the technology does have to respond to that,” said Johnson. “For example, I know of some venues that are putting Wi-Fi around the concourse but not in the bowl as they don’t want people to be constantly connected; they want them to focus on the event as that is how the atmosphere is built.”

With connectivity improving all the time, and new technologies set to make an even-greater claim on patrons’ time and attention, it is inevitable that the debate around venue experience will intensify even further over the next few years.