Sports Venue Technology Summit: Is VR even better than the real thing? 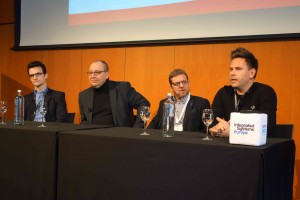 The buzz around virtual reality, and in particular its potential for transforming the sports viewing experience, has been one of the industry stories of the past year. But trial deployments at sports venues that allow fans to experience events in a new and exciting way are also taking place. A session at SVG Europe’s Sports Venue Technology Summit held at ISE Amsterdam considered various practical and monetary issues surrounding VR that are still to be resolved.

Moderator Karen Hogan Ketchum, Senior Editor Sports Video Group, started by asking each of her four panellists to introduce their companies and to answer a very simple question: what is VR?

Jean-Luc Affaticati, DigitArena CEO said: “At DigitArena we specialise in broadcast graphics for different environments. For us, VR is not a technology issue but an immersive experience providing a capability of taking you to the stadium or to see different actions from different immersive points of view.”

According to Dave Elliott, Holovis, Enterprise Business Development Manager, “Holivis is a UK-based company. We are experiential designers, working across a range of sectors from attractions and theme parks to companies like Jaguar and Rolls Royce. We believe that VR goes beyond visuals, and it’s about more immersive experiences such as 3D audio and motion and scent and special effects – that’s where I believe the future of VR will lie.”

Pieter Van Leugenhagen, Yondr, Business Strategist told the audience, “We are a VR production agency based in Antwerp, Amsterdam and New York, and we are growing a global ecosystem of VR professionals by licensing our brand, IP, academy and know-how. What is VR? For me, even 360 video and virtual CGI, from the moment you get completely immersed, I think you can talk about [that being] VR.”

Samuel Westberg, LiveLike, Director of Sales EMEA said, “We’re a US-based company, with entities in India and France. We specialise in live sports events, with the idea of bringing together the best experiences in one. To me, VR is the perfect media aggregator to create a perfect sports centre for the sports fan.”

Hogan Ketchum then asked whether live sports events are suitable material for the VR experience. Pieter Van Leugenhagen said, “Obviously the Super Bowl is too long a game to watch in VR, and the resolution is an issue. But I do often watch the NBA through the Samsung headset; the field is a lot smaller, and when the camera is positioned in the centre you just have to look left and right.

“Let’s say for a football match the pitch is too wide for VR and the resolution is not that good – it’s too early. But as an agency we are more focused on fan engagement and not on live broadcasting. At the moment we are shooting footage for Club Brugge, a day in the life of a soccer player, just to increase fan engagement with the team and bring the fan into the stadium. We also did a piece with Manchester City’s Vincent Kompany where you were part of his training programme and could witness how hard he works every day — and that creates a certain bond between the viewer and the hero and brings them closer together: in that way VR is excellent.”

Livelike’s Samuel Westberg said, “We had the chance to do the Super Bowl last week, where we brought instantaneous replays to the NFL and Fox Sports. Right now we all agree that the quality of VR is not good enough for you to experience a whole game. I think it’s just a question of hardware limitations at the moment.

“To get back to the question of what is keeping people inside the VR environment as long as possible,” said Westberg, “is to consider virtual reality not only as a video player but as a media aggregator to put together all the experiences. Slowly but surely we’ll move towards that market where we keep people entertained — bringing in social which is very important — rather than always thinking of it as a second screen application. I do think that it can become the main media for people to watch sports and live events at home.”

Jean-Luc Affaticati said: “There are two technical limitations at the moment in VR. One is the capability to do live streaming events; there is a delay. Secondly there is an issue related to the point of view; yes it can work for the basketball court but in the soccer stadium you are too far away. Yes it works in NASCAR: you may have seen the ‘How Close Is Too Close?’ clips. You can see the value there – but you have to deal with rights issues and technical limitations. As of today, VR is not the main screen; I see it purely as a replay and companion.”

Of course, the thorny issues of media rights and licensing are just as important for the long-term development of VR as are the resolution of current technical limitations. Westberg said, “Media rights are breaking down. Originally there was only TV, then there was second screen then there was digital. Owners like international federations are looking to make as much profit as possible by selling rights. The way I see it, the market is going to break into pieces and VR is going to be one of those pieces. For the long run it will be a separate, independent right. It can become the main screen; maybe not tomorrow, but in the near future.”

In a question from the audience, George Cole from The ISE Daily asked, “Do any of the panel fear that VR could become the next 3D, ie a failure related to the fact that people didn’t seem to like wearing goggles?”

Pieter Van Leugenhagen answered, “I don’t believe VR will be the same hype as 3D was. In my opinion 3D had the intention to replace cinema and replace normal TV. VR is just a new medium that sits alongside cinema and TV. If I want to watch the next Star Wars or Lord of the Rings I go to the cinema. If I want to watch a soap opera or a soccer game I watch it on television. If I want to have a cool experience behind the scenes and have more fan engagement, or discover and explore my next travel destination, I put on a headset. In my opinion it’s just a new medium and not something to replace another one.”