At the home of newly promoted club Fortuna Düsseldorf, DFL Deutsche Fußball Liga and Messe Düsseldorf staged a two-day tech event May 8 and 9 for football leagues, clubs and producers. 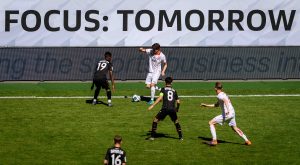 Almost 500 delegates from 20 countries gathered in Düsseldorf this week to visit a unique sports event. A highlight of Day 1 was a real-time Innovation Match between the Under-17 youth teams of Fortuna Düsseldorf and Bayer 04 Leverkusen with a focus on production in UHD HDR involving 29 cameras by DFL subsidiary Sportcast.

Other highlight technologies included new tracking systems geared towards gathering match data, primarily implemented by DFL subsidiary Sportec Solutions. Based on this match data, visitors were given the opportunity to experience the actual match in an e-sports style wearing virtual reality goggles.

The central stage for the SportsInnovation Forum was constructed on a gantry inside the Esprit Arena – home to the returning top-flight Fortuna Düsseldorf club after six years in Bundesliga 2 — with panel discussions and presentations from around 40 exhibitors and invited experts. 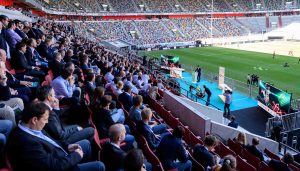 Attendees included representatives of FIFA and UEFA and of numerous clubs from the Bundesliga and Bundesliga 2, Spain’s La Liga, Italy’s Serie A, the English Premier League, France’s Ligue 1, the Swiss Football League and Japan’s J-League as well as decision-makers from the local and international media industry. Additionally, the Steering Group of the World Leagues Forum (WLF), the international association of professional football leagues, met during SportsInnovation 2018.

The two-day event opened with a welcome session involving Christian Seifert, CEO of the DFL German Football League; Werner Dornscheidt, President and CEO, Messe Düsseldorf; and Giampiero Rinaudo, CEO and co-founder of Gold Sponsor deltatre; in conversation with sports journalist and author Raphael Honigstein. Rinaudo reminded the audience that deltatre was founded in 1986, long before the internet and even before PCs. He observed the company was “fortunate to be involved in media technology and sports rights, two sectors that never stop innovating. Innovation is in our DNA,” said Rinaudo, “with hundreds of millions of fans following sport in some way using our technology.

“In 2016 we entered into a joint venture with the DFL’s subsidiary SportCast to create Sportec Solutions. This is a forward-looking partnership. Sports is always a major driver of innovation, whether high definition or 4K or slow motion. I hope in the next two days we will find the innovation that will [become] the next big thing,” said Rinaudo.

DFL boss Christian Seifert reminded the audience that the first SportsInnovation event was staged in 2007, involving a match production by SportCast. “Now Messe Düsseldorf is involved as our partner: running trade fairs is not really our core business so we’re very happy to be partnering with them for this event!“

Seifert remarked that Germany’s disallowed goal in the 1966 World Cup Final and Frank Lampard’s disallowed goal for England in 2010 would both have stood if today’s video technology was available to referees at the time. “Sport is the driver. Sport is one of the most attractive forms of media content in the world and will always be at the forefront of innovation.

“We are the only football league to serve all media stages; data, match production, archive, marketing and sales of rights,“ said Seifert. “We have enhanced the experience of Bundesliga matches, ensuring that all media partners around the world receive the best quality. We’re now taking data processing to the next level with our partner deltatre.

”With current DFL turnover of Euro 1.4bn we’re one of the biggest entertainment organisations in Germany. We have tripled the turnover of both leagues in the last 15 years,” he said.

“At all times we must be innovative; have a sense of entrepeneurship; and be courageous enough to continue making innovations. No other league in the world archives as extensively. From the start of next season, our LED stadium [advertising] perimeters will be adjustable with digital overlay technology.

“We have to continue taking the brave decisions,” said Seifert. “Stagnation is not an option. Young 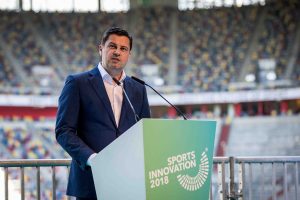 Christian Seifert: “We have to continue taking the brave decisions. Stagnation is not an option”

people now observe the world through mobile devices: our transmission and sound quality will be optimised step by step for mobile devices. VR has its potential – though will probably mature in ways we do not yet expect. eSports will not just become bigger; eSports will become a lot bigger,” he remarked.

“Football is so different to ten years ago – thanks to innovation. Whether it’s start-ups, established technology companies, sponsors or clubs – one thing we have in common is innovation. Let us discover and shape the future together,” said Seifert.

How much should we change the beautiful game?

The final session of Day 1 was titled ‘Leagues Looking Ahead: Which Innovation Will Make a Real Difference for the Game and the Fans?’ It was held in Hall 6 of the adjacent Messe Düsseldorf complex and moderated by deltratre Chief Product & Marketing Officer Carlo de Marchis, featuring Andreas Heyden, CEO of DFL Digital Sports; Lars-Christer Olsson, President of European Leagues and President of the Swedish League; and Mark Waller, EVP International & Events, NFL. 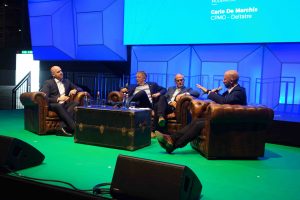 “That, I think, is one of the characteristics of our league and maybe American sport that is different from European sport,” said Waller. “We constantly look at ‘should we change the game itself’ – not the technology, the way data is collected, or the way it is produced and broadcast. The core of the game itself. I think that is a different mentality,” he said.

“For DFL it’s important for us to control the whole value chain,” said Andreas Heyden. “From the broadcast signal to the tracking of the data to marketing and sales, we do it all in-house. That helps us to drive innovation from within.

“We’re the first league in Europe to roll out VAR. We have introduced many innovations around the production and consumption of media. Most important, as it is our core model, we creating value for the licensee. Only if we put the licensee in the position to really transport the unique atmosphere that’s happening in our stadiums to the international markets, then we have a chance to be successful on an international basis,” said Heyden.

“I would put another factor into the ring in relation to our clubs. They are the innovators in-stadium, with mobile ticketing, cashless payments, team performance to prevent injuries and so on. As we’ve seen from today there are lots of broadcast innovations: can we find a new camera perspective to make it even more enjoyable? How do we link the eSports experience with the real-game experience – as they are quite different?

“But do we really need to change the game itself?” asked Heyden. “I don’t think so. It is such a beautiful game that innovation around the game will make it even more enjoyable.”

“I disagree,” said Waller. “Imagine if we were in the telephone industry and we decided we didn’t want to change the telephone. It’s a great speaking device and it works really well. Somebody says ‘but it could be portable and we could have apps’. Would consumers want the clock to stop on innovation?

“It seems odd to me to talk about an innovation ecosystem where the core of the ecosystem – the game itself – is an uncomfortable conversation point. Why should the game not evolve in the same way that everything else evolves? The fans need change,” argued Waller.

“I think football is evolving, though at a slower pace,” countered Heyden. “The simultaneous advantage 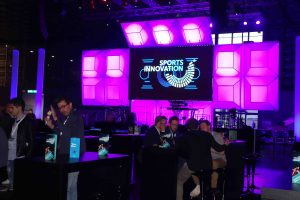 At the conclusion of Day 1, the organisers laid on various food trucks, bar, a live band and then a DJ-driven disco in Hall 6 of Messe Düsseldorf

and disadvantage of football is that it is played in every country in the world. With football you have many leagues and a franchise system that controls how the game is changed. It is more highly regulated. If you watch a game from this season and compare it to the Fifties, you will see many differences in terms of tactics and athletic ability.

“What makes football the most successful sport in the world is consistency – that is the uniting factor. We are driving change – but we don’t touch the game itself so much,” said Heyden.