SportsPro Live 2018: Exploring the intersection of sport business and technology

As such an important driver of innovation in the broadcast sector, some aspect of sport is often cited as a use-case for over the top (OTT) technologies and services.  Positioning itself at the intersection of sport business and technology, the SportsPro Live 2018 conference, held at ExCel in London on 11-12 April, provided a great opportunity to explore the hot topics of OTT and immersive technologies from the perspective of the sports industry and sports rights holders. 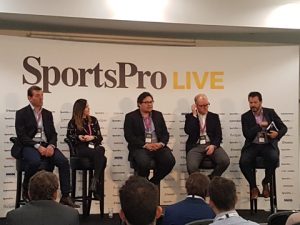 The eSports panel at SportsPro Live: (L to R) Neville Upton from G-Finity, Róisín O’Shea from Fnatic, Chris Mead from Twitch, Ben Payne from McLaren, Dave Smith from Metta Sport and the moderator

The 500-plus delegates included representatives of international federations, national governing bodies, leagues, sports marketing agencies, media companies, broadcasters, and a spectrum of technology companies involved in enhancing the presentation of sport within venues or to the growing audience of fans online. A broad cross section of clubs was also represented on the delegate list from some of the biggest names in European football such as Manchester United, Liverpool, Chelsea, Arsenal, AS Roma, Juventus, PSG and the City Football Group, to ambitious clubs from the lower tiers of English football such as Salford City and Leatherhead. Broadcasters present included Discovery, Sky, BT Sport, BBC, BeIN Sports and Eleven Sports. SVG Europe members Deltatre, Eurovision, and SAP featured on the conference agenda.

In a day one session on reinventing the sports experience through immersive media, Jonathan Levene, managing director at Intel Sports, provided an overview of the company’s True View technology that constructs volumetric images and is capable of performing as a “virtual camera” to recreate the view point of an individual player on the pitch. The data handling requirements of the technology are vast: the 38 camera set up that is being deployed in the stadia of six leading clubs from Spain’s La Liga, generate the equivalent of a million HD movies for each 90 minute match.

Ongoing development aims to convert volumetric imagery into a true virtual reality (VR) experience. On the basis of the 150 million global audience for live broadcasts of La Liga matches, Levene speculated that if just 1% to 2% of viewers were to opt for the VR experience, revenues of $50 million per match were conceivable.

La Liga introduced a new formula for the distribution of TV revenues from the 2015/16 season, in part, to reduce a very large disparity – cited by some sources as 8:1 – between the receipts enjoyed by the different clubs. With only six stadia being equipped for true VR it will be interesting to see whether the proposed business model will allow visiting teams to share in the revenues or whether there a risk that historic disparities are reintroduced.

Another panel discussed how traditional sports rights holders can engage with eSports.  Noting that eSports competitions are currently built on game publishers’ intellectual property, one questioner asked whether sports rights holders were likely to create their own bespoke games in the future. Neville Upton of GFinity, a gaming platform, cautioned that game creation required a very different skill-set and it was probably better to partner with an established publisher.

Twitch’s Chris Mead noted that most successful eSports titles have grown out of the communities that naturally congregate around the more popular published games.  Róisín O’Shea, of Fnatic, that manages teams of professional gamers competing in major eSport competitions, revealed that it is also possible for brands to enter eSports by partnering with to gamers on simpler campaign-based games.

In an era of increasingly fragmented audiences, harnessing OTT to more deeply engage with existing fans or reach new viewers was the subject of another panel.

Representing the rights owner, John Learning is managing director of WTA Media, a joint venture between the World Tennis Association Tour and Perform Group. He explained that in 2016, WTA was only producing about 30% of its available content, broadcasting just 700 matches. The JV committed to producing every one of its 2500 matches but realised that its broadcast partners had finite capacity in their linear schedules. By creating their own OTT platform, WTA Media set the goal of putting as much content out as possible so that fans could produce their own programming.

On the future interaction between traditional linear broadcast and OTT, Learning said that from his tennis perspective, his goal in the next five years was to be obsolete as a “world feed broadcaster”; he doesn’t want to dictate what is being fed to fans or partners. Priority is to make sure they can deliver all the “product” at once to all partners so that they can make the decisions on what’s important to their local audiences.

Later, Drew Barrand, marketing director of EFL, talked about how its iFollow online platform is making the 1500 English Football League matches that are not televised live each year available to expat fans in 225 markets and territories worldwide. Fans subscribe through their favourite club’s website for the service which is delivered by a platform developed and managed by NeuLion; a fan for every participating club has been found in every country.  The EFL’s latest domestic rights deal includes a provision for fans in England to access their club’s matches if they are not being covered by Sky.

Day two started with the Winter Olympics.  Pyongchang 2018 was Eurosport’s first Olympics as rights holding broadcaster in 48 European markets and territories.  (Discovery Eurosport will be delivering a keynote on its Winter Olympic Games successes at SVG Europe’s Sports Tech 2018 at Chelsea FC in London on 30 May.)

Jean-Briac Perrette, president and CEO of Discovery Networks International reminded the audience that Eurosport’s objectives had been to engage more people on more screens; to deliver the first digital Olympics across Europe; and to add “the Discovery difference” through its storytelling capability.

Observing that today’s television metrics are still in the “horse and buggy era,” Perrette explained how Eurosport had come up with a new metric of “total video” to measure the total number of users across all devices whether watching a broadcast feed, pay-TV, the Eurosport player online or a mobile app.

The 352 million unique viewers who watched any of the winter games at any time, on any screen, represented almost two-thirds of Eurosport’s European population footprint.  In Norway and Sweden, where Eurosport was also the primary broadcaster, 90% of the available audiences were engaged.

To maximise its reach, Eurosport’s objective was to re-aggregate audiences across all available distribution platforms. “We heard a lot about linear broadcast versus OTT but for us it’s not binary,” said Perrette.

On consumption in UK, Germany and other markets where Eurosport partnered with free-to-air public broadcasters, Perrette acknowledged that the incumbents have strong track records for covering the games combined with significant audience shares within their markets. “It’s not a zero sum game,” he said.  “For us it’s about the ecosystem. It’s not about trying to “out-BBC the BBC.”

Representatives of Sky, Bundesliga International, DAZN and Eleven Sports debated whether a genuine tipping point had been reached in the face-off between streaming and TV.

Mark Watson, Executive Chairman and Group CEO of Eleven Sports observed that streaming had reached a tipping point technically where the broadband infrastructure was robust enough and offered sufficient reach, but for big properties in particular, “­­­­­­­­­­­­­­­the economics of just selling content on a streaming basis are quite challenging­­­­”. He continued that while Eleven does stream everything it does, well over 90% of its viewing tends to be through cable or satellite platforms. For smaller properties, such as Eleven’s domestic rights to the third division of Italian soccer, Watson thought described streaming as “perfect”.

Mai Fyfield, chief strategy and commercial officer at Sky felt the tipping point was still sufficiently far away that she couldn’t see it. “A lot of people are good at streaming on demand content, but streaming live content is much more critical.”  One of the biggest challenges is coping all the people who come to the service at a particular time.

From the rights holder’s perspective, Robert Klein, chief executive of Bundesliga International, stressed the importance of quality when selling premium rights and felt that a million concurrent streaming viewers was probably the current absolute maximum. He was also cautious about the current revenue opportunity but did note that there is a desire for accessibility.

Watson also shared his perspective on the much-trailed entry of Facebook, Amazon, Apple, Netflix, and Google – the so-called FAANGs – into the streaming market for sports rights.

“FAANGs now all have former TV execs and know sports are an effective way of selling advertising. But advertiser-funded TV networks were priced out of the UK market a long time ago. I don’t see why it would be any different for Facebook.”

It appeared to be too early for any of the speakers to comment on the potential impact of tighter data protection regulation on the online players’ business models, especially in Europe. As well as clashing with NAB, SportsPro Live 2018 also coincided with Mark Zuckerberg’s two days of testimony before the US Congress.

Discussing the right models for the OTT era, Tracey Keenan, WWE vice president and general manager, detailed why the company takes a broad approach to its media reach.  “Our OTT numbers have hit record heights after WrestleMania, but our TV platforms remain fundamental to what we do. It can’t be a case of one size fits all; you have to be everywhere.”

In the same session Andy Wasef, EVP business strategy and development at Deltatre, added: “When it comes to OTT platforms it’s important to temper and manage expectations.  Just because you have one million broadcast viewers, it doesn’t mean you’re going to have one million subscribers to a digital product.”

With hindsight, it was possibly a comment from one of the opening sessions that summed up the speed of the convergence of sport and technology as explored in the SportsPro Live agenda. 1998 ice hockey Olympic gold medallist Angela Ruggiero, now CEO and co-founder, Sports Innovation Lab, said: “If you’re not overwhelmed, you’re not paying attention.”