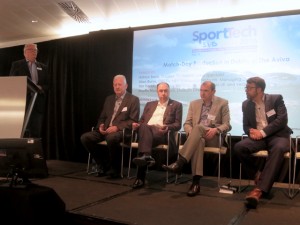 During last week’s SVG Europe SportTech session in Dublin, a special session focused on the design and build of host venue The Aviva Stadium. The four-strong panel also discussed the broadcast infrastructure of the stadium, as well as the need to respond to the rapidly accelerating demand by visitors to access content on their smartphones.

With a seated capacity of 51,700 seats, The Aviva Stadium is home to both the Irish rugby union team (IRFU) and the Republic of Ireland football team (FAI) through a 50:50 joint venture. It also hosts some Leinster Rugby games, and has staged both the Heineken Cup Final and Europa League Final in recent years. This summer the venue will stage four EURO 2020 finals fixtures, three group games, and a round of 16 match.

Opening up the session, stadium director Martin Murphy said that the transition from the previous stadium on the site could be likened to “going from an antiquated venue to a space age one. We recognised that we had one chance to build a top-class facility that is user-friendly for all events – rugby, soccer, American football, concerts and so on. [Consequently] we decided to get all of the stakeholders involved from the outset.”

A “very strong foundation from a broadcasting POV” was integral to the plans, but as Murphy confirmed, there were plenty of challenges to be negotiated during the design process. “We had size and site restrictions, height restrictions, the fact that the pitch is very close to the Sandymount beach area,” he recalled. “We had to reserve space on the ground level for broadcasters, OB and back-up, while all the hardware and generators were situated below the upper tier too.”

AV and broadcast systems design, supply and integration firm Eurotek was involved throughout the development of the venue and has “an ongoing role on matchdays, as well as advance planning for future matchdays. It is important that [every aspect] is completed to schedule,” said Eurotek technical sales specialist Adrian Back.

IPTV integration was another priority, as Tim Hoddy – head of sales UK and Ireland at IPTV, VOD and digital signage specialist Tripleplay Services – observed: “One of the great things of being able to be involved with a venue [from the earliest stages] is the ability to [look closely at the use of video]. Using an IP network gives complete flexibility with regard to which content goes where.”

The original premise called for the system to “take broadcast TV feeds and distribute them to a network of over 200 screens, or any of the OB content that has been ingested to be distributed around the stadium. [But it is also possible] to use the IPTV platform to give a bit of that US sports razzamatazz by integrating with the digital signage system.”

Working on the ambitious Aviva Stadium project has “helped us as a provider of an IPTV platform and in terms of the integration process with digital signage,” added Hoddy.

Focusing on the challenges of those all-important matchdays, Murphy summarised some of the main issues: “Obviously there are security concerns [to be managed], and we also have to engage the crowd. We also need to ensure the broadcast and media plans are completed early and everyone is clear on what the plans are.”

The aim is to make the experience for stadiumgoers as involving and “enjoyable as possible”, but Murphy admits that the issue of accessing replays and other content via smartphones “wasn’t on the radar when the stadium was being designed. [Hence we are examining] the issue of how the integration between the broadcaster and viewer is changing, and what needs to happen in the future [regarding the use of content] on the screens.”

The advent of the smartphone has resulted in “an appetite from fans to consume more content,” said Hoddy. “If you put unique content on-screen in the wall it ticks the fan engagement box, but if you can look at doing that [with] smartphones even better. WiFi in stadiums is very challenging, and still is, let alone video. But if you can get it right it opens up a new world of engagement.”

The Aviva Stadium is certainly making progress in this regard, with Vodafone implementing a 4G platform that will make it easier for visitors to access video content. “The mobile phone users of the future are our future fan base,” said Murphy, adding that his team has been playing “close attention to what is happening in the US, who are probably the leaders in terms of maximising fan engagement.”

The stadium will continue to look at ways of “accommodating new camera positions and technologies”, whilst Murphy is certainly aware of the emerging 4K/UHD revolution – although effort needs to be made “to make it more appealing to viewers watching on a 4-inch screen”.

Whatever the future with regard to mobile content, it should be remembered that the process of viewing that material “is all quite passive. What makes it good is what is delivered over that, [and so the onus must be on] the broadcasters and venues to ensure that production values are maintained,” concluded Murphy.