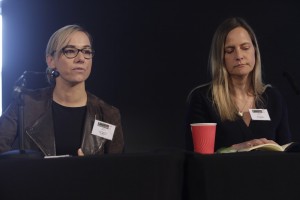 Two key Sky Sports production executives took to the stage at the 2017 SportTech Summit at Emirates Stadium in London to reflect on one of the big events of the year: the recent Anthony Joshua vs Vladimir Klitschko heavyweight world championship event at Wembley Stadium.

Jennie Blackmore, Sky Sports, production manager, said that the biggest challenge was that Wembley Stadium’s camera gantry and other facilities are well-designed for a rugby or football match – but not so well-designed for an event that is intended to take place on a small boxing ring in the middle of the pitch.

“We had to put those things in from scratch,” she said. “The camera gantry had to be built over the seats as well as the normal broadcast and commentary positions. So, it was a pretty large scale build and de-rig and there was a knock-on effect that if one person fell behind than everything else fell behind.”

Most importantly, time was of the essence given that the football pitch and stadium had to be “boxing ready” in a matter of two days instead of the typical five or six. An hour-by-hour schedule was laid out to make sure everything from covering the pitch to installing flooring, a canopy, handing screens, installing lighting and a PA system, and everything else was in place. Oh…and the needs of other broadcasters like RTL and HBO/Showtime also had to be considered.

“We had numerous meetings prior to the buildup so that they could put forward how they wanted to cover the event and then we incorporated that as much as possible,” said Blackmore. “For example, Showtime/HBO like to have their press positions at the back of the pitch while RTL wanted to be up higher.”

With all the buzz around the match Sky Sports Director Sara Chenery said she and the team had to be careful not to get carried away with everything wrapping around the event and to focus on the needs of those who are paying to watch the match.

“You need to remember it is still a boxing match,” she said.

That said, one of the biggest production challenges involved what happened right before the match. RTL wanted to show boxer Wladimir Klitschko’s entrance into the ring beginning when he left the dressing room and then covering him until the first bell.

“We had to plan how long it would take for him to walk to the ring and then had to make sure the special effects went off in the key places,” said Chenery. “But we also had no real rehearsal time but had to make sure the pyrotechnics were timed to the music and we got the action and transitions via the Spider cam. So, we were constantly adapting to get the timing right.”

The next challenge was the delay between Klitschko’s entering the ring and then boxer Anthony Joshua making his entrance. Boxers can play mental games with each other by making each other wait and that led to the production team padding time. And while the main fight was the major focus there were also numerous undercard fights that were covered and needed to be taken just as seriously.

“Future stars are coming through and the undercard fights are equally as important and we need to give them the same respect,” said Chenery. “And we have to do that without compromising the main bout.”

Blackmore said that Telegenic was a key part to making that happen as the team stepped up to give the production team a comfortable working environment during a month when the Telegenic team was also gearing up for the Champions League Final in Cardiff.

“Nothing intimidates them so that relationship is very important for us,” she added.

Boxing may seem like a simple sport to direct and produce given that all the action takes place in a small ring without a lot of lateral movement but the reverse is true as the referee and even the boxers themselves can often prevent viewers from seeing key punches and moments. And camera cuts to follow the action can often lead to overcutting.

For the Wembley fight remote cameras in the corners helped a lot with coverage along with a jib camera at ringside that was used a lot and can be moved around to make it as if the viewer is sitting in the front row.

“You want to give the ringside experience,” says Chenery.