SportTech 2017: Timeline for IP as new UHD2 truck is unveiled and discussed 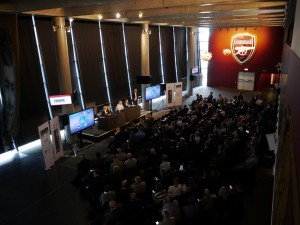 Built on a 16.5 metre triple expanding trailer, Timeline Television’s new UHD2 provides fully uncompressed IP capability for broadcasters. Billed as ‘one of the most powerful OB vehicles in any European fleet’, UHD2 was not only on display and open for visitors at the Emirates Stadium, but it also formed the basis of the second session of Sporttech 2017.

“We originally built a UHD truck in 2105 — Europe’s first purpose-built 4K UHD OB truck, to support BT Sport’s 4K UHD channel,” reported McDonnell. “That was based on SDI. Then we set ourselves the target to build a large scale 4K OB truck in 2017. The specification called for 32 cabled Sony 4300 4K cameras, 14 HD or UHD servers – so in the EVS world that’s three in, one out in 4K – and 20 UHD external sources. That led us to need a matrix of close to 2000 squared. The size and cost of a traditional 2000-squared SDI router is obviously very large, and would be impossible to fit it in an OB truck. So, we quickly came to the conclusion that we wanted to go IP.”

At the start of 2017, SMPTE 2110 was being adopted and it was agreed that UHD2 would be based on that standard. McDonnell said the decision would allow the use of a 3G SDI/4K video signal that could be split it into different streams. “So, you get video streams, the audio steams and the data. We can then subscribe to these individual streams, so that an endpoint, such as a replay server could subscribe to camera one video, or an audio independently. Every endpoint on the system is an embedder and every originating point is a de-embedder.”

McDonnell said that Timeline chose the Arista 7504 as the core switch for the vehicle. “It is essentially a 4000-squared switch in the 3G domain. Each port is 100GB – and we call it non-blocking. The key is that every single port can switch any single source to it. That is the same philosophy as a standard 1000 squared router – but in IP. We can switch any input to every output. So, the switch is at the core of the solution and has replaced the SDI router.”

The control of that switcher is handled by a SAM system. “Actually, control is not exactly what we are doing,” explained McDonnell. “With that same system, we control the end points, so if the EVS wants to control camera one, the EVS has to be told to subscribe to the IP address of that camera. The SAM controller knows the multicast IP addresses of all the sources and destinations. Those switches happen at the speed of light – or the speed of a packets – so there is no delay between requesting a switch and it occurring.”

Obviously, there is native IP equipment that can connect to the switcher without any conversion. The 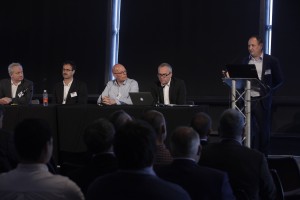 first instance of that connectivity is the SAM Kahuna vision mixer. Timeline originally put a SAM Kahuna 9600 in to the UHD1 truck and, said McDonnell, it has become a standard 4K mixer that allows a fusion of UHD and HD sources. “We can mix and match fins in the mixer, so for some sources you can work in SDI if you wish or have all IP fins. And we can work in Standard Dynamic Range (SDR) and we can work with High Dynamic Range (HDR) within the same mixer.”

The truck has two IP Kahuna mixers so SDR/HDR operations can be kept separate. The source from the camera is converted to IP and is routed to both mixers. When the director presses a button on the control surface it sends each HDR source to the same destination as SDR.

Another native IP piece of equipment is the 48 input/12 output SAM Multiviewer fitted with a 100GB interface. “Plugging two 100GB boards into the multiviewer gives you all the connectivity.”

McDonnell continued, “We are going to need SDI for some time to come. The tailboard of the truck is fitted with 160 SDI inputs and outputs that need to be converted to the IP world. The equipment we have chosen to do that operation is the SAM Mix Card which routes on a 25G interface.”

He said that a mix card can be thought of as an 8 x 8 matrix that has eight in and eight out videos to IP. As soon as that mix card is presented to the core router it can instantly access any of the eight sources and destinations. Up to ten cards can be fitted into a rack meaning, in effect, that any box is an 80-squared router.

“In a traditional OB truck, we might have a 1000-square router, 2000 wires going into the same bay to the router and distributed throughout the vehicle. We don’t have that at all – we have these boxes connected with fibre to the central core switch. So, there is no single point of a huge amount of cabling.”

McDonnell explained that the Sony 4300 camera was the choice for UHD2, although this is not native IP. “We come out of the PPU in 4K HDR, 4K SDR on 1080p or 1080i, and all of those signals go into a mix card and are converted to IP. We can then, throughout the truck, route to monitors, to mixers.” 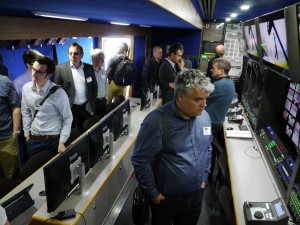 He said that the Sony roadmap calls for the adoption of the 25GB SMPTE 2110 interface in 2018. When that happens, Timeline will be able to go IP from the camera into the router and include all the feeds on one or two cables. “At that time, we will be able to remove some of the mix cards out of the truck which, because of the way it is built and there isn’t this central point anymore, will be fairly easy.”

The truck is wired for 12 XT4K replay servers. Again, the SAM Mix Card is the bridge between the SDI output of the EVS to the IP world. Another two servers are used for archive recording.

When McDonnell had completed his presentation, Davies turned the Felstead to ask how some of the pot holes in the road to IP can be avoided. “One of the first things you have to do is choose a primary supplier for the IP infrastructure that has a sufficient forward view of IP systems and how they are constructed. And they must have a sufficiently advanced road map such that you can get the best economic solution.”

Felstead went on to emphasise that the supplier needs to be on the ‘bandwagon’ to adopting common standards. “This is really important to us – and all of us on this panel are members of AIMS – and we all agree that it is in our collective interest to adhere to common standards, SAM has been on this path for a couple of years and we are very comfortable with where our equipment is in relation to the standards. When the standard is ratified, we are ready. There’s a big danger if anyone chooses a proprietary format.”

Davies asked Schut how Axon became involved with the Timeline project. “The infrastructure was born on a whiteboard at BT and Cerebrum is now an important part of the offering. The control system, fully British developed, is important as we have to make sure the integration works with all the different vendors and all the systems they want to control.”

That integration even extends to moving a monitor up and down to suit an individual operator’s preference.

Moving to Pauwels, Davies asked about the EVS involvement. “The XT4K supports the channels and cameras that need to be recorded matched exactly the roadmap we had developed for the equipment. It takes four channels, that’s already one more channel than the XT3. It was straightforward to meet the specifications.”

McDonnell was asked if it had been a conscious decision for Timeline to be at the forefront of IP developments. “More and more I wanted to build a large OB truck, and we could have gone down the SDI route. You can just about squeeze a large truck into SDI. We thought we would have launched a truck that had a 10-year life. With the IP infrastructure, there is a lot of expandability. Not only that, we are in a position to build with new technology, changing resolutions, changing formats, it will still be native to the IP. UHD2 was born out of wanting a flexible system.”