SportTech 2018: F1 on its journey towards merger of online gaming and live broadcast

Formula 1 is breaking ground with its new Esports Series, a development that relies on OTT live TV to engage viewers and is now in full production following trials in 2017. 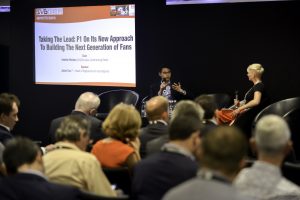 In this Q&A session, F1 Head of Digital Growth and Esports Julian Tan told SVG Europe Contributing Editor Heather McLean how F1 has embraced Esports and OTT, from the need for increased audience engagement and targeting new markets to developing the next generation of F1 fans.

“Formula 1, due to its recent acquisition by Liberty Media at the back end of 2015, has seen a huge transformation. The digital department is one that never really existed before. One of the priorities was to look at how we could expand and build on the potential of Formula 1,” said Tan.

“One of the terms we use heavily is ‘unleash’. That’s because Formula 1 as a commercial rights holder has a lot of potential. It’s about finding the right initiatives to unleash that potential.

“Esports is a burgeoning industry, a booming industry – there’s a lot of excitement there. Most recently you’ve heard that the Olympics is considering Esports as a demonstration sport for 2024. It’s a brilliant way to reach out to an audience we have not spoken to directly before: young, digitally savvy, global, and a growing audience. For Formula 1 it’s very important that we’re continually building that pipeline of fans, and really Esports is a central pillar in that strategy,” he said.

“There was also a sense of urgency: with Esports growing so fast you wanted to get your foot in the door of this revolution. In Month 10 since launching in August last year – we’re in our second season now – we’re beginning to realise that beyond reaching that untapped audience out there, there is real potential around being a sustainable business, becoming a commercial pillar for Formula 1.”

What was the initial concept and how did you research and plan what you introduced in 2017?

“We announced in August we were going into Esports. It was very much, ‘let’s get in and figure it out’. We needed to get on the opportunity early, and test and learn as we went. In our inaugural season last year we were testing multiple things, including ‘what is the appetite for something like this? What will be the reception?’

“And what surprised us was the numbers coming back from the engagement. From the racing viewpoint there are a lot of parallels between Formula 1 racing and Eracing. You’re in the driver’s seat. From a viewership perspective, it’s a race: if you enjoy the thrill of racing you will enjoy Esports as a viewing experience,” said Tan.

“We tested the concept of balancing online competitions with live events. Last year we started with a global competition, and that did really well. Mass participation was really important.

“We also tested live events: last year’s semi-final was in the Gfinity Arena, a controlled, purpose-built Esports arena here in London. The final took place in Abu Dhabi, where we brought Esports into the paddock area of the circuit. We tested several formats, and as we continue to stage the series we are looking at how we build an exciting, sustainable growth pillar for the business.”

The Esports fanbase is obviously a new, younger crowd than traditional F1 fans. Will this project build a separate fanbase, or will you be trying to convert F1 fans to Esports? Will the fanbases converge?

“The main impetus was around reaching out to the gaming community. What came as a surprise was the warm reception not just from the gamers, but from the traditional F1 fans as well. It’s mainly down to the fact that anyone who enjoys the thrill of racing can enjoy this new form of racing – it’s a new form of entertainment really.

“The competition is very real, with the racing element and the strategy involved. Last year our semi-final drew in huge crowds. It was the most watched live Esports event in the UK last year,” said Tan.

What are your plans for this season? Where are you now in your planning and implementation?

“This year was very much about building on the momentum. We worked really hard in the off-season to speak to the Formula 1 teams. We’re really proud that with the launch of the F1 season the teams have come on board to build their own Esports teams – which is a very exciting thing.

“So now we can really combine that gaming world with the magic of Formula 1, to create a product that is special and unique. We think the combination of those two worlds gives us a unique advantage. It makes the Esports series a lot more real, giving it more authenticity,” he said.

“The 2018 season has already kicked off. The first stage Is an online qualification stage, which is about

that mass participation. Anyone in the world with the official Formula 1 game can participate in the competition. It’s about finding the fastest racers and giving them a chance to qualify among the 40 fasters racers in the world.

“Then we’ll move into the second stage, which is the professional draft stage. It’s the first time Formula 1 has ever done anything like this. The teams will come in – McLaren, Force India, Haas, Red Bull – and will pick their drivers from this pool of talent. It’s hugely exciting. It’s a professional draft – not dissimilar to how the NBA does it. We’ll put the 40 drivers through an assessment, a boot camp as such, where we’ll have a series of challenges across sim racing.

“This will also shed light on their personalities. Obviously, getting to represent a real Formula 1 team is a big deal, and from the teams’ point of view, being very quick in the game is not the only thing that’s important. It’s also a great marketing tool for the teams, so they want to ensure their drivers have the personality to conduct themselves in media situations and so on.

“We are going to live broadcast the pro draft, which will take place in July. We’re finalising our distribution strategy, but there will be an online element and a TV element. We find that a mix of both works very well. The teams will pick their talent and there will be back-stories to the drivers and back-stories as to why the teams have chosen certain drivers.

“And then we move into the third stage where we’ve got these drivers representing Formula 1 teams, and they will take place in a championship-style range – similar to the real F1 grid. By the end of the year we’ll have our first-ever team champion and driver champion as well,” said Tan.

What kind of rewards can these racers achieve? Will they potentially become as famous as the real drivers?

“It’s important for any sport to have personalities, celebrities, stars – it’s a huge part of sport. As we look to build out F1 Esports it’s definitely a priority.

“For a lot of these guys, having the opportunity to be a driver for Red Bull or McLaren is amazing. It’s literally a bedroom-to-team scenario. Sim racing as a community has existed for quite a while, but it has kind of stayed under the radar. With Formula 1 coming in, it can become a more mass appeal event, in a different way to what we’ve seen before.

“There are a lot of parallels between real racing and sim racing: but for a lot of these guys, becoming an Esports star is the destination. It’s not a stepping-stone to becoming a real driver; rather, becoming the Esports equivalent of Lewis Hamilton is what is exciting. And there will be a prize fund of at least $200,000 to be allocated to the winning drivers and teams at the end of the season.”