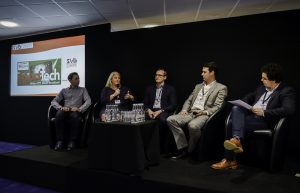 Bringing the 2018 edition of SportTech to a close was a dynamic panel session examining the motivations that have informed the development of several leading sports federations’ OTT platforms. There was also consideration of some of the primary delivery-related challenges surrounding OTT services and the ways in which offers might evolve over the next few years in line with viewer expectations.

In his opening address Gosetti observed that for Eurovision, the priority was to “find the right balance across multiple channels to push content that cross-promotes itself and does so without compromising [other aspects of the broadcast]. It’s very important to be able to support the content owners, federations and agencies to maximise their reach” in what is a “very complex environment”.

In this first half of the session, Matignon spoke to two federations – the English Football League and WWE – who have been working hard to evolve their own OTT systems and thereby “maximise exposure of the full range of content” as well as reach fans who may reside in previously “under-served markets”.

For the EFL, Byrne said its OTT strategy was informed by a desire to reach more fans worldwide. Outside the UK, “there are a lot of fans who can never get to games by virtue of geography, so the idea is to get our content in front of them”. In the UK, only 130 matches out of 1,600 held each season may be selected for conventional broadcast, meaning that there is considerable opportunity to push more content out to the EFL’s “passionate fans”. Hence the EFL has been working with broadcasters, rights holders and technology partners, including NeuLion, to develop what is an increasingly far-reaching OTT strategy.

The WWE also has considerable form in this area, noted Keenan, citing the federation’s evolution of a “multi-platform role [encompassing] linear broadcast, pay per view, social, OTT” and more. Acknowledging it is a “sports entertainer” as opposed to being a ‘pure’ sports organisation, Keenan says WWE has thought carefully about its “many different type of consumers” as well as the multiple types of content and platforms it might wish to facilitate.

Ultimately, for an organisation with this kind of reach “you have got to be everywhere”, but it’s important to remember that traditional broadcast is still central to the business and is likely to remain so for the foreseeable future. Hence live content is not put on OTT networks except in the form of short clips until at least a month after each event has taken place.

Byrne agreed that the linear model is still pivotal to revenue, meaning that “our TV partners still get the first pick of games, so we have to communicate to fans that if they pay for a season pass they won’t be getting all the games.”

For federations, it is certainly a “balancing act”, added Keenan, with a different approach required for each market. In some countries linear TV will still be hugely dominant, whereas others will have “more mature” diversified sports viewing. Then there will be regions, like Scandinavia, where OTT can provide a platform for nurturing an interest in a sport that “can maybe then be translated over to TV at a later date”. In general, though, WWE viewers are evidently early adopters, with the organisation aware as early as 2008 that its fans “were five times more likely to be consuming digital content than average sports consumers and twice as likely to have an account with a service like Hulu or Netflix. They were already tech-savvy… they just needed the content.”

Perhaps inevitably given the frenetic speed at which OTT has developed, tech vendors’ activities in this area tend to be focused on, noted NeuLion’s Bellamy, the ability to support organisations’ wish to supply “different content to different territories with different models”. For a next-generation video experience company like NeuLion, one of its greatest USPs can be “enabling an end-to-end review of getting the service out of the door [and identifying] the regional objectives”. This can then be translated to solutions that suit localised price points and payment methods, the kind of “device reach” that is being sought, and other factors impacting upon “the actual engagement of consumers”.

For AWS Elemental, Frost emphasised the company’s ability to provide “the tools, building blocks and cloud-led services” that can be used as the basis for a variety of OTT services. A big part of the ongoing evolution of OTT, he said, is “enabling the industry to move to the cloud and embrace cloud tools” that allow it to satisfy diverse consumer demands.

Although it’s certainly going to be far from easy for federations and vendors to keep track of what is by its very nature a moving target, there was great enthusiasm among panellists for what the future might hold. Bellamy, for one, pointed to the opportunity for “building more personalised features” that support “community-like” viewing. There is also likely to be a call for increased support of 4K and HDR in light of historical experience that shows “consumers will always crave improved experiences”.