Broadcast TV often finds it difficult to reach younger audiences, particularly in the 16-24 age group. It’s not enough to simply show a match on a big screen to a generation that has grown up with YouTube, instant messaging and multiple platforms.

“Things are moving much faster than they ever have before, and young audiences want something different,” Amy Williams, younger audiences lead, BBC Sport, told delegates to SportTech 2019 in a session entitled ‘Interactive, Social, Instant: How BBC Sport is Targeting a New Generation of Sports Fan’.

“The type of content that 16-24 year olds, in particular, want from us is very, very different. It’s no longer about big screen, long viewing. They want snack-able content, they want vertical screens,” she said.

This audience also wants relatable talent on screen in the form of reporters and presenters who are also accessible on social media like Instagram and Snapchat, and who are transparent and honest. 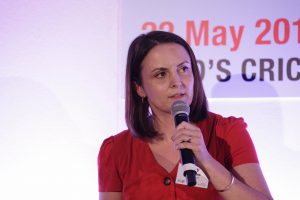 Mixing genres is something that works well with this audience, and Williams showed a 90 Seconds video that mixed rap with a fan’s love for Liverpool Football Club. This was shown on TV on Football Focus, was used on radio and pushed on Twitter. “In terms of impact, discoverability, cost effectiveness, relating to an audience,” it was particularly effective.

“For us, it’s really about sport entertainment. BBC Sport is very good at doing the big events, looking at the analysis, but actually how can we do stuff that has a lighter tone, which is a bit fun?” she asked. The BBC is experimenting a lot in this sport entertainment area, including working with independent producers, and is very open to trying new things, she said.

Interactivity is also an key factor, and the BBC is doing a lot with Instagram Stories and YouTube. “That sort of conversation with the community is really important.”

How people are watching this content is also central. “People are still making a lot of stuff without thinking about mobile,” even sending through logos that can’t be viewed properly on a phone, and Williams believes that for this market broadcasters should put mobile first, designing for it rather than TV.

She believes the crucial lesson to learn is to put the audience first. “For everything you do, what audience are you trying to appeal to? What was their date of birth? What is their nostalgia factor?” that is the key. You also have to stay relevant to that age group, whether you are thinking about the subject matter, any talent you might involve, or the event you are focusing on.

Data can help greatly with this. “We’re starting to do a lot more data-led commissioning,” but with a public service element added, and “it’s really important to learn from the analytics that are out there.”

She also advised broadcasters to think outside of sport, as it did with the 90 Seconds rap, because traditional sport doesn’t necessarily cut it anymore.

Once you have that big idea, ask how it will work on Instagram, or YouTube or any other platform. “You can’t just think TV and then everything else is an extra. That’s old school, we need to get away from that,” she said.

To help bring this to life, the BBC is creating multi-platform teams, with multi-skilled staff. It is vital that anyone working in this area stays on top of new technologies and methods, she added. “You don’t need to learn about everything, but you need to keep learning, keep progressing yourself, otherwise you’re not going to do your business any justice.”

Also, question your intention. “Are you making content for your audience, or are you making it for yourself? There’s no time for passion projects in this game,” she said.

If you get access to someone like Jesse Lingard, the Manchester United and England footballer, for example, who has a “great social media following, has a total understanding of social media, YouTube — who are you going to send to do that story?” she asked. An experienced, older reporter might not be as relatable, and might not get the same sort of insight as someone new, even if that might pose its own risks.

She admitted that some established talent can be open to trying new things to engage with younger viewers, but is wary of pushing this where it might have cringe making results.

Looking to the future, Williams said the BBC has “dipped its toe” in eSports coverage several times since 2015, and she feels eSports is an area that the broadcaster should be covering but it needs “a lot of love” if they are to compete with the likes of Twitch. “If BBC Sport is to enter into the eSports market we need to do it in a unique way. We don’t know what it is yet,” she said.