SportTech 2019: How The Football Social uses YouTube and social media to engage fans

Sky Sports’ The Football Social is a live chat show that is streamed via YouTube and Facebook on a Saturday afternoon and during big mid-week matches. It is made for a new generation who want to interact with and be engaged by their football coverage. As a result, this fan-led programme has been described as ‘Soccer Saturday for a social generation’.

A key to the success of the show over the 2018-2019 season has been the ability to engage fans in unique ways. The team has pioneered fan engagement via smartphone, with clean live streaming from very crowded football stadiums around the world. Over the season the team has gone live from anywhere, even at high speed, thanks to TVU IS+ HEVC technology, which is available on any smartphone device.

Event host and session chair Abi Stephens began by asking The Football Social presenter Chris Hamill to outline what the show is and how it came about.

“I would describe it as an extension of Football Daily’s principles, which is always putting the audience at the centre of our conversation. We like to think a digital conversation begins with us, and the fans are the engine room in that regard. I also think we strive to create a sense of community; we’re really there to facilitate their questions, so they are powering us along. 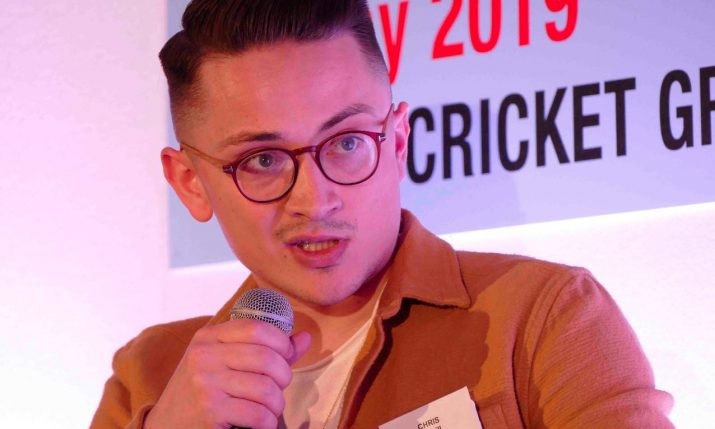 “We partnered with Sky Bet for the World Cup last year. I had been doing some research on a Google study, which over a five-year period found that 93% of under 25s second-screen whilst watching live sports coverage. This was fascinating to me, and it showed that they were consuming sport in a very different way.

“And from there on in it wasn’t about coverage, it was about conversation. We thought, let’s create a forum that people can chuck their reactions into, and offer them an outlet for any angst or anything else that happens during the game. It did develop into that over the course of eight World Cup shows,” said Hamill.

“Fans are enjoying the fact they are so important to the editorial. They’re enjoying the fact they get unlimited access to the footballer we have on. I think they like our analysis, which is somewhat different from linear [shows] in that it’s largely statistically driven. We like to position [the show] as ‘the Moneyball of football’ – that’s how we separate ourselves.

“But really, as the on-screen chemistry has improved on The Football Social (and this has really been a partnership with Sky Sports’ Soccer AM), we just wanted to create a sense that we were in a friend’s living room. We wanted it to be more about being genuine than being slick – which again is a different dimension to linear television.”

Abi Stephens: How have you continued to grow and yet retain that authenticity at the heart of the show?

Chris Hamill: “We’re teeing up the audience all week on Football Daily’s YouTube channel: there we do 18 pieces of content a week across three channels. We’ve cultivated our own team of in-house talent that people have become invested in; and it’s just a gentle reminder that this show is on on a weekly basis.

“It definitely helps if Liverpool or Tottenham come back from a few goals down in the Champions League! I think we had 1.5 million views combined across Soccer AM and Football Daily, with 50,000 concurrents [for the UEFA Champions League semi-finals]. This was a record for us. We finished doing around seven million views over the course of the season and our target was around four million.”

Abi Stephens: What are the biggest challenges for the team, in continuing to produce the show week in and week out with such great audience participation?

Chris Hamill: “You have to find the right people and the right combination for the sofa. You have to have a person who can take social questions and watch four games at the same time – you need the right sort of personality for that!

“We’ve worked on being able to go live across Facebook, YouTube and Periscope. We’ve reined it in to being a true YouTube product rather than trying to tick a lot of boxes – one really big box, if you like. That’s a transition that’s happened across the course of the season.

“But also finding new ways to engage the audience – and this is where TVU Chat has really helped. The 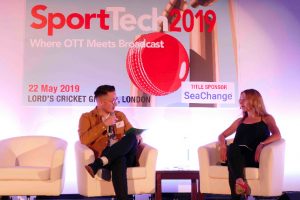 basis of everything is about strong editorial, and being able to throw to a presenter or being able to go pitch-side lets us bring the audience into the studio. It’s another string to our editorial bow, and I think it’s going to be a major part of The Football Social for next season,” said Hamill.

“We’ve been fluid towards the end of this season. We’ve seen that certain competitions are more fruitful than others. I don’t think there’s any spectacle in world football like the latter stages of the Champions League, which was demonstrated this year. Absolutely incredible. You have to think about the various competitions, and to get the scheduling right – it’s all about hitting that sweet spot.

“Fortunately, a lot of ex-players are now looking to get on what they would describe as ‘new media’ – so a more casual approach where the pressure is maybe not quite as high. It’s all about making them feel comfortable, but engaged as well. We also clip excerpts from some of the ex-players on the show, which can generate a huge amount of views. You can be really clever with how you use someone’s presence on the sofa.”

Abi Stephens: Finally, what advice would you offer to all the sports broadcasters and producers in the room here today?

Chris Hamill: “I would say, trust your audience. Let them be part of the editorial. It’s not like we have a segment that’s dedicated to the audience; we’re throwing to them every two or three minutes on the show.

“Having a blend of digital and linear talent has been great. It’s been a really interesting, constructive team exercise. Yes it will be a little more slick next season for sure – but we’re hoping to retain that genuineness.”