SportTech 2019: Keeping subscribers happy when ‘It’s Just Got to Work’

The nature of live sports makes launching OTT and VoD sports services particularly exciting. “Whether it’s a single round heavyweight fight or Tottenham scoring in the 96th minute of a Champion’s League semi-final, those minutes are not to be missed.”

Streaming is a trade-off between reliability, latency and quality, and all three matter for live sports. No one wants to watch a feed that breaks up or looks bad, but they also don’t want Twitter telling them all about a goal before they’ve seen it. 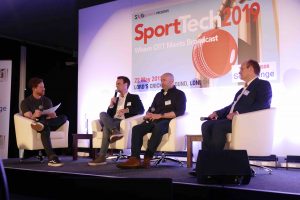 However, for many fans, it is the only way to see all the sport they want. Broadcasters like the BBC also “want to show as much live sport as there is audience appetite for,” but which linear TV hasn’t time for, said Oliver Thompson, executive product manager, BBC. “Linear is still hugely important for sport, particularly in terms of numbers,” but it always has to be balanced against non-sport content, and popular programmes of other genres can’t be usurped by minority sports. “What OTT does is give us a direct route to that audience.”

“I think our audience appreciates the fact that our coverage is pretty much comprehensive of the ATP tour,” subscribers get access to every singles match “which is a very difficult thing to achieve via traditional television,” said Andrew Hall, director, Tennis TV (ATP Media).

“Netflix sets the standard and sets the expectation for all of our products, so it’s just got to work,” unfortunately people expect live sport to work in the same way and with the same efficiency as Netflix, “which presents tremendous challenges for smaller operators like ourselves or larger ones like DAZN,” but he believes that expectation is a good thing for driving the progress of streaming.

“Sport needs to be given back to the fan and made accessible, on devices they use all day long,” to fit in with their lifestyle, added Marcus Parnwell, senior VP of market expansion, DAZN. “It’s really about delivering the same high-quality experience to everyone,” despite the fact that subscribers have widely different internet connections and devices, but should be afforded a similar level of interactivity despite this.

In planning for DAZN’s recent launch in Brazil, an analysis of the spread of games and the internet topography, showed times when viewing might have been difficult. So, as it does whenever it enters a new market, it worked with local internet service providers to help optimise their servers and networks to cope with the demands.

“There is a level of expectation, not so much around quality of delivery but quality of presentation. OTT gives us the opportunity to stream more hours of sport, but the expectation that goes with the [BBC] brand is that that is to a very high production standard,” with half-time analysis and a lot of other content, “and that doesn’t necessarily scale.

So, how we meet that in an OTT market and what different presentations of live-stream sport could look like under the BBC brand,” is something it is continually working on, said Thompson, who is working on live streaming not only for sport but all genres for all devices.

On the technical side, the BBC is trialling UHD to connected TV sets, which it did for the World Cup and will do for Wimbledon. While it has a lot of bandwidth “there is finite capacity there,” so it has to carefully monitor how many people are connected, and as more higher-definition streams are made available this will continue to be a challenge.

Tennis TV has an even more global reach, but with a limited infrastructure. “Our users expect the quality production and the quality delivery. What they don’t like is stuff that just doesn’t get produced,” they expect every match to be available to them, said Hall. “I think they are a little more relaxed about whether they can watch it on a one-camera or three-camera production” so long as the game is covered as “someone, somewhere, is interested in the player on that court and our promise is that we’ll show it where others don’t.”

This all has to be done within budget, and it is working closely with Deltatre to optimise its technology “to bring the best possible quality to as many users as possible. But, yes, the expectation is Netflix.”

DAZN has tried to give users a similar experience to traditional TV, but with added personalisation and curation to make it as relevant as possible. “A lot of users just want to sit back and watch the content. Yes they want to engage in social media and second screen, and there is a definite space for that, but it’s about moving the wheels slowly and taking people on a journey as opposed to changing that game completely,” said Parnwell.

In terms of distribution, he acknowledged that the big tech companies, like Amazon or Netflix, have set a high bar, “but I think that is just rising the tide for all of us,” he said. “As we all get bigger, the space gets bigger, everyone benefits.”

“The way audience behaviour is changing, particularly under-25, we’re in the hardest market of all, in terms of our product propositions, because that cohort’s behaviour is moving away from appointment to view,” or watching anything when it’s live or scheduled, and even moving away from long-form programming (30 minutes plus), said Thompson.

“You’ve got a couple of generations whose expectation is to watch what they want, when they want on whichever device they want, and probably not for very long. It seems to go against the very idea of a 90-minute football match or five days of test cricket. But, sport does cut through. My remit for live covers everything we do live digitally, and there are two exceptions: live sport and breaking news. Other stuff sometimes struggles for audience duration.”

Another issue, particularly for minority sports, is “how you maintain audience buy-in outside of the live moment? How do you build up to that live moment?” This is particularly so for on-off or occasional events rather than longer-term competitions, as it can be difficult to maximise the potential audience for these events.

“The more editorial work we can put into it outside of the live moments and the more we can say to the audience: ‘Here’s why you should care’,” whether in features about the competitors, about the build-up to a major championship, or the jeopardy involved. “It is certainly not a ‘stream it and they will come’ market that any of us are in.”

A YouGov survey in 2017 found that 72% of users expected a bad experience with live streaming. While Williams feels that OTT has improved since, it’s still not perfect.

“The main objective is that [streaming] works, and I’m always nagging away at our partners to reduce latency, looking at all the different elements of the chain,” said Hall, “but, we’re delivering very high quality streams,” and there has to be a balance. Some subscribers complain that they are watching a betting stream on their phone that is way ahead of the Tennis TV stream. “The betting stream is obviously at a much lower quality, but the consumer doesn’t necessarily know that.”

In the UK, the main ATP rights holder, Amazon Prime, is also OTT and Hall often compares the two – which has more latency varies depending on what device is being used, and which match is being watched.

“In reality cable and satellite have latency as well, and we’re somewhere in that 20-30 second range,” said Parnwell. Whether people notice generally depends on how socially engaged they are, because “Twitter kinda sets the new latency bar,” and it takes about 15-30 seconds for people to Tweet.

The BBC generally aims for about 30 seconds, but is looking at moving off its physical encoder infrastructure to a cloud contribution/distribution platform. However, cloud isn’t always faster. “There are still big challenges there around latency,” said Thompson.

“We are doing a lot of audience research around perceived speed,” both for video and other services, such as data updates, he added, “and we’re not as quick as social, but one of the interesting messages is that there is still a massive amount of trust in what an organisation like the BBC or DAZN or Tennis TV has compared to social. We have people telling us: ‘I see there’s a goal on Twitter, then I come to the BBC to see if it has actually happened’.”

“For me, sport is just drama. It’s the tension, it’s the peril, and it’s about telling that story,” using whatever tools you have, said Parnwell. “Just slapping a VR headset on someone at the side of a pitch may not be the best way of doing that, but putting someone in a ring next to Anthony Joshua would really dial up the peril.”

For him the key factors are “low latency, no rebuffering and high quality (HD), and on top of that you can start telling those stories, but you have to get the fundamentals right or else what’s the point.”

“Reliability always comes first,” agreed Thompson, and for sport and news “the most important thing is it works,” even when working with teams who rarely do live streaming. On such occasions, innovation is not a priority. “The innovative things are not going to work for the vast majority of the audience,” so it is question of concentrating on those with the most likely uptake.

The types of innovation he is most interested in are generally those that happen outside of the video, where they use their editorial experience to change the TV model of one way broadcasting and bring the audience closer to events.

Given limited budgets, “do you focus on improving the reliability, improving the video experience, investing in that with your partners, or do you try to add features?,” asked Hall. That may garner publicity, “but your main focus has to be on delivering a video and managing that subscription. Those are the two absolutely vital things and for anything to qualify for getting on my roadmap, it’s got to make a pretty solid case for itself.

“I’m not going to be adding overlays, prediction features, etc, because then I’ve got to replicate them across 14 different platforms, with the inherent cost that involves. I would much rather manage the subscriptions smoothly, ensure the customer service backs it up as well – that is such a vital part of any service like ours. Neglect it at your peril, because users will have issues and those issues need to get dealt with.”