SportTech 2019: Unplugging football with Borussia Dortmund and the story of BVB-TV

German football giants Borussia Dortmund have seen spectacular growth in BVB-TV, the club’s dedicated in-house over the top (OTT) TV channel. BVB-TV was relaunched in 2018 as part of a concerted effort to be more engaging and attract a wider audience.

SportTech at Lord’s cricket ground on 22 May, head of production for BVB-TV, Axel Gasteier talks about BVB Quiz Taxi

At SportTech at Lord’s cricket ground on 22 May, head of production for BVB-T, Axel Gasteier, who is leading Borussia Dortmund’s video creation and distribution, discussed the overhaul and outlined how the football club is overcoming its current and future challenges; attracting an international audience and engaging fans without possession of the live rights.

In the session titled Football Unplugged: The BVB-TV Story, attendees got an insight into Borussia Dortmund, which has been attracting a lot of attention for its OTT channel primarily because it generates a lot of content, yet has no live rights itself, so the club has had to look for other ways to create attractive content for fans.

The club is not allowed to do live streams of official matches as those are claimed by Sky Sports and other partners of Bundesliga, however, it still manages to do 100 live streams per year. These consist of press conferences and pre and post-match conferences, as well as 15 live coverages of matches: 10 pros, two legends, and three from the youth division. It also streams 10 training sessions live at about 40 minutes each, and around five big events such as a board meeting, press conference for annual numbers, and maybe a talk.

At SportTech SVG Europe’s Fergal Ringrose speaks with Bernd Mueller, Sportradar’s director of digital services, about the challenges of working with Borussia Dortmund, as head of production for BVB-TV, Axel Gasteier, looks on

Overall, BVB-TV provides subscribers for €1.99 per month access to recent and exclusive videos of the football club, all Bundesliga, International and Cup matches of Borussia Dortmund on demand, the highlights feature, so users can jump right to the desired scene of the match with extensive live statistics, elaborate video coverage of all official matches including live streaming of press conferences and everything hey need to know about Borussia Dortmund.

Yet on paid versus free content, the club is opening up more content as free. Commented Gasteier: “We want to show more free content, which in the guidelines we are allowed to, because we think it’s better to have a bigger audience than to make money out of subscriptions. In the en we think we get more money of we have sponsors like Opal or whatever sharing content with us.”

The club has various programmes on BVB-TV, including BVB Quiz Taxi. This format gets around many of the issues it faces in creating its own, non-live match content. Explained Gasteier: “[BVB Quiz Taxi] has three major advantages. It’s of course a very competitive thing, and if it comes to competitive, the players work fine; everybody wants to win, this is their nature, they like these kind of shows they are right into it.

“The next thing is players don’t have time. If you say ‘hey, let’s do a movie, let’s do a filming of something’ they don’t want to do it. But here…. [players] have to go from the hotel to the training camp. We drive them from the hotel to the training ground and they have the show filmed in the car. In the car that means the [car manufacturer] sponsor’s very happy. We have outside shots, we have inside shots of the product of our sponsor, and if the sponsor’s happy, we’re happy,” noted Gasteier. 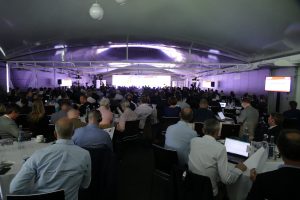 SportTech attendees enjoyed the first session of the day at Lord’s, Football Unplugged: The BVB-TV Story

However, the biggest challenge for Borussia Dortmund has been the German language. Whereas predominantly English-speaking clubs are able ‘film and go’, producing in English and broadcasting to the international market, as a German club everything needs to be translated, dubbed or subtitled. “This is a big advantage for English clubs and a big disadvantage for German clubs,” said Gasteier.

On its OTT platform, Gasteier said the club has around 700 German videos per season, which equates to almost two per day, and about 300 in its English section. This means the club has to translate, subtitle or dub about 300 more videos than an English club does with similar video numbers.

“Another challenge (but this might be the same in English clubs) is the mother tongue of our players,” added Gasteier. “About 50% are German – no problem for us – Spanish 15%, French 15%, English 10%, and the rest which is Danish and Polish is 10%, so if we want to make content for the international market we have to translate everything.”

He went onto say that 50% of the club do not speak English, which, he noted, “for international aspects, is not that good”. Again translators are needed for more in-depth interviews, which is expensive; interviews need to be translated from the mother tongue of the player into German, and then into English.

To get around the rights issues, Borussia Dortmund shows highlights. About three to five minutes after the final whistle is blown the club shows the entire match on its hightlights feature, and adds what Gasteier calls ‘big data’ for every minute of the match, from ball possession, shots on target and anything else the viewer might want to know. Viewers can see the starting line up, which players are still on the bench, and how many cards have been shown. A timeline at the bottom of the video enables the viewer to skip around the match to watch what they want, such as goals.

Sportradar is Borussia Dortmund’s OTT partner. Bernd Mueller, Sportradar’s director of digital services, commented on the challenges of working with Borussia Dortmund: “The biggest challenge…. was expectation management. Fans wanted us to have a reliable, prefect technical solution with almost every feature you can imagine, and on top of that Borussia Dortmund knows they are one of the biggest clubs in Germany, so we were facing some of the most challenging requirements we’ve ever had.

“Bringing this all together, it was great to have Axel, who was our single point of contact on behalf of the rights holder,” continued Mueller. “He filtered everything which came from the other departments; marketing and merchandising and whatever.”

Beside the technical production, Sportradar also does the entire production including live commentary for Borussia Dortmund. “In my opinion the trustful relationship was the secret to bring it to such a great success,” concluded Mueller.