“We started working together during London 2012, working with the IOC on delivering up to 11 live streams and 2,000 fast turnaround clips to places where they hadn’t sold digital rights,” explained Burns. “That gave us the chance to ‘kick the tyres’, so to speak, across a major event and test it out. Having proved [it works] we have progressed it by rolling it out to clients within golf, cycling, rugby, football and other sports.”

“London 2012 was the first sports production that Forscene was ever used on,” added Cowan. “We were contracted by YouTube on behalf of NBC to form the basis of the highlights factory that was in 30 Rock [30 Rockefeller Center, the world headquarters of NBC]. 72 streams were ingested into our data centres in the UK. 50 editors sitting in 30 Rock then created highlights packages on forscene and that was distributed by NBC for its mobile and web content.”

Over the last three years the two companies have continued to further their relationship, the duo explained, to the point where they have developed a cloud-based workflow that requires no hardware for ingesting or encoding content. 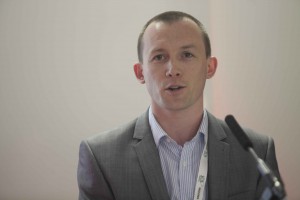 Pete Burns, deltatre: “We started working together during London 2012”

Burns said: “At NAB we demonstrated the Microsoft Azure forscene workflow where we took what was traditionally local hardware-based and SDI input capture, conform and publish and moved it entirely into the Azure cloud. Now, if we’re working on a multi-sport event with a number of live streams we’re able to scale up both the acquisition and the input and also the publishing, conform and delivery of content. This allows us to [work quickly], produce more content and get it out to digital platforms whether that is our own CMS or a third party like YouTube.”

Cowan added that, although it is a SaaS company, Forbidden had previously had to reluctantly provide hardware to transcode or ingest content too. “This is the first time that we don’t have to do that,” he said. “We are not geared up to or have any will to sell or provide hardware so Azure is a great solution for us. We can take the Microsoft HLS or Smooth Streams directly into forscene and then transcode them, create the packages and then push them straight back to Azure. We can ramp up and ramp down as required before and after an event. A lot of clients are taking this as their workflow going forward.”

First introduced in 2004, Forscene is often used in long-form television production for review and logging. With recent enhancements it is now capable of editing footage, adding graphics and closed captions, and recording voiceovers, amongst other things. It can also be used for sub-clipping and highlights packages, two functions that Cowan describes as its “sweet spot” with a number of US sports news providers using forscene for their online output.

Deltatre specialises in sport, offering both services and software products to federations and governing bodies as well as broadcasters and digital publishers. Amongst them is the graphics software package Magma, a “one-stop solution for live TV graphics” that converts live and historical statistics into screen-ready content. The company also offers ‘white label’ digital host services that augment and enhance existing workflows and drive additional content.