SportTech Europe 2015: Defining a 4K roadmap for the future 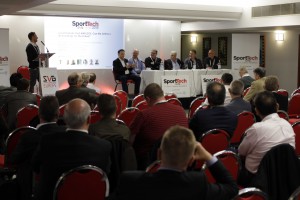 SportTech 2015 featured a session titled The Great Debate: Post-NAB 2015, Can We Define a 4K Roadmap For The Future? The consensus was that we can, but it won’t be simple. Indeed, as Brian Clark, Commercial and Technical Projects Director at NEP Visions, said: “There are technical hurdles, but they are moving hurdles,” and it’s not just a matter of resolution, but also colour, frame rate and dynamic range. “Forget pixels. Pixels are easy. It’s the other bits that are going to be more difficult,” he said.

CTV is also pursuing those moving hurdles. It built a 4K-capable truck in the middle of last year, and “things have moved on a tremendous amount since then,” said Barry Johnstone, CTV Managing Director. “We put everything we could in there to try to protect ourselves from the future. Having gone to NAB, I’m not sure if we should take all that stuff out and start again.”

The OB company is part of the Euro Media Group, which is looking to invest in new UHD-capable (or even 8K-capable) cameras and hopes to start a three-to-five year renewal process of more than 400 cameras later this year. “We would like to standardise,” said Johnstone, which is why CTV didn’t buy any cameras for its new truck, as it is only this year that there is a choice of cameras for the sports market — although he liked some of what he saw from each of the manufacturers at NAB.

NEP is also looking to buy new UHD cameras “pretty soon”, as it has a chassis being built at the moment, and is also looking at IP networking and how the market is changing. “There is a dynamic that has changed very quickly over the last six months,” said Clark. He believes that the market has gone from wondering if UHD is valid, and how few UHD cameras you could get away with, to how to do the same as we do with HD, but in UHD.

Unfortunately, the cost of UHD is an issue. As BBC Sport’s director, Barbara Slater, told another SportTech Europe session, broadcasters are under huge pressure to cut budgets (in her case by 20%), so “who is going to pay for this investment in 4K?,” asked Steve Knee, Managing Director, Cloudbass. 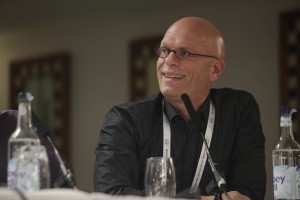 Peter Schut, Axon Digital Design’s CTO, added that some broadcasters still have problems justifying the added expense of HD. In the Netherlands, The Voice is shot in SD because the commercial director of RTL won’t pay 15% extra that the production company is asking to do it in HD, because he doesn’t believe that many more people will watch it. Instead, it is upconverted for transmission.

Clark believes that UHD will be driven by commercial considerations, “and I don’t mean in terms of being able to monetise 4K”, but whether to keep up with rivals or to seek competitive advantage.

However, it will still require an audience. “If viewers switch over between HD and 4K and don’t see the difference, they are going to cancel their subscriptions,” added Knee. Unless viewers see the same rationale to move to UHD as they did from SD and HD, “we’ll have spent all this money for nothing,” he believes.

“When we’ve been talking to broadcasters about 4K, we need to deliver the technical solution in a way that the production teams can implement it in exactly the same way that they normally tell their story, and talking to EVS, to Evertz and Sony, the technology is just not there yet. If we want to do 4K through an EVS network, the restrictions are going to be huge, moving this amount of data around.”

Indeed, one of the biggest question marks is over replay devices, and what will be practical when dealing with four times the data, said Clark. “If you are to mimic the number of replay channels you put into an English Premier League football match and try to replicate that in 4K, it’s a phenomenal amount of EVSs. They just don’t physically fit in the truck. So, what are we going to do? We’re going to have to look at doing it in a different way.”

Clark remains unconvinced that UHD by itself will be enough to attract viewers, however, he believes that wider dynamic range can make a big difference. At NAB, he watched a demonstration showing identical HD screens, one showing Rec.709, the other HDR 2020 colour space, and believes that this is the difference “that will drive consumers.” Having gone to CES in Las Vegas in January, Clark believes that TV sets are only months away from delivering HDR, and he’d buy one.

A couple of years ago Canon’s Larry Thorpe said viewers would need at least a 50-inch TV to gain anything from UHD; at NAB he said it will actually require at least a 65-inch screen, and Johnstone wondered how many viewers in Europe would have room for it.

As Schut pointed out, also having visited CES, the consumer electronics industry “doesn’t care about the broadcast industry,” and is charging ahead with UHD screens where the only difference is the higher resolution (sometimes at lower frame rates – 25/30p). He agreed with Clark that HDR is the key, “but I think 4K is the vehicle to get HDR […], to be honest, 1080p HDR would have been fine.”

Distributing UHD to viewers is also a challenge. Dock10 handles video and broadband distribution around the MediaCityUK site, including to apartments, with a single fibre delivering triple-play packages, with bursts of up to 100Mbps, which means that people use a lot of OTT services. It has the capability to deliver UHD, with HFR and HDR, once such services launch, “but that is very much on a cluster basis. How that rolls out down the street into Victorian and Georgian homes is another challenge,” said Paul Clennell, dock10’s CTO.

When it built its seven HD studios, it used a very modular design, so it can simply replace boxes to move a studio to UHD. Indeed, it has been talking to manufacturers about doing that for one studio as a showcase and may do some live productions as an experiment in the next year. This would mean it wouldn’t need to be expensive. “A lot of that equipment could be hired, we’d just purchase the core infrastructure,” explained Clennell. “The key thing is customer demand for making that transition,” which he thinks will happen gradually over the next two to four years, coinciding with technology refresh rates.

It has a Cisco 10Gbps network alongside baseband and will transition from baseband to IP as necessary. However, it is already dealing with 4K every day, as rushes come in for post production. “The vast majority of what we ingest for drama comes in 4K and stays in 4K,” he added.

RT Software has done three 4K trials so far, with a UK broadcaster, and is working on a 4K production for pan and scan and stitching. It has also just delivered two 4K systems, having developed its first 4K graphics systems last year (although it is only now that all the equipment is in place to ship them). A client had asked for a 4K system, but “we had no idea if we could push that many pixels around a PC in realtime to produce the graphics,” revealed Steve Hart, RT Software’s Development Director. 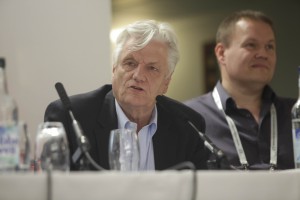 He agreed that HDR and high frame rates are more important than the number of pixels, but for graphics it already does HFR and wider dynamic ranges (with floating point systems, it doesn’t matter whether it is 8-bit, 10-bit, 12-bit or 16-bit). “It’s more about trying to get those pixels out and what you do with them afterwards.” Euro Media Group is already making full programmes in 4K, such as concerts, they just aren’t being transmitted in 4K — and Johnstone believes that transmitting UHD, and even getting it back from the truck, will be one of the biggest challenges.