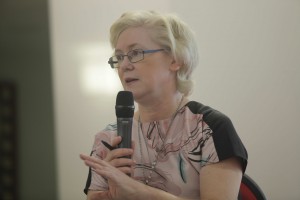 Barbara Slater: “What I have seen is that new technology just constantly makes us more ambitious”

The Keynote Q&A at SVG Europe’s SportTech Europe 2015 summit in Manchester on May 7 featured BBC Director of Sport Barbara Slater in conversation with Sadie Groom, Managing Director at Bubble & Squeak Communications. Slater is responsible for approximately 20,000 hours of global sports coverage across radio, TV and online each year, including live sporting events, highlights, sports news and magazine programmes. Before becoming Director in 2009, Slater was Head of Production and Head of General Sports for the department.

We all know it’s UK Election Day today. What is the most positive thing the incoming government, whatever parties are involved, could do for a public service broadcaster like the BBC?

I sincerely believe the BBC adds tremendous value to the UK. I think it’s respected internationally as well. The danger is – and we’ve already had a flat licence fee now for a number of years – the consequences of that are that over those years I’ve had to take out 20% of cost from everything we do in Sport.

We’ve striven incredibly hard on an efficiency agenda, but there will be scope consequences because of that. And there have been. I just think that if it goes on, there are some very stark choices and you’re going to have to make the BBC make some of those choices. It’s incredibly easy to say ‘oh that’s fine’, until it’s your area of interest where the cuts would have to hit.

I just think the BBC is a massive asset, and it will be run down with a continued agenda of cuts. It’s very difficult to get that back. We’ve got something here in the UK to be incredibly proud of; it would be wonderful to see a little more fight to keep that, within those government corridors.

What can you say about the BBC charter renewal process, discussions on which are due to commence towards the end of this year?

There’s no question it’s going to be really challenging. Not just for the BBC, but across the industry. There is a trend where some dominant premium events dominate investment across the industry. We are seeing a division – you might say the rich get richer and the poor get poorer. How healthy is that? I think if there’s one request, from the industry collectively, it’s to keep some premium sport on free-to-air television. I think it’s incredibly important that that’s still part of people’s experience.

Satellite broadcasters bring enormous benefits to the industry: but actually I think an ecology where there is a sensible mix across is one that is working now and it would be brilliant to see it working going forward as well.

What are the biggest challenges for BBC Sport in the year ahead – especially looking towards the Rio 2016 Olympic Games?

Compared to the World Cup … God it’s going to be a challenge! It was difficult enough for the World Cup, and I’m talking about the city’s ability to cope – and that was for individual matches. There’s now going to be the equivalent of 26 world championships in one city, so I think there are some very real and practical challenges ahead as the Rio Olympics approach. I know that the team is factoring those concerns in: how they locate staff, where the studios might be and so on.

BBC Sport moved to Salford from Television Centre in London over a period in 2011 and 2012. It was a bumpy ride at the time – but has everyone settled in now?

Yes, some of the press were quite critical of our move to Salford at the time. I want to be really clear: from a production, an operational, a divisional point of view, the move to Salford has been absolutely fantastic.

We were running around Television Centre with tapes. It could not cope with the demands of modern broadcasting. If I had given you a tour of BBC Sport in TV Centre we’d have needed two and a half hours – running up stairs, down corridors, up lifts. To be able to co-site everything has been transformational, it’s been fantastic. We’ve just been able to bring everything together, and we operate so much more efficiently and can do so much more with less: ingest once, publish many.

Technically what’s been the most important single development you’ve seen since you came to the helm of BBC Sport?

What I have seen is that new technology just constantly makes us more ambitious. I don’t think it’s made things easier or simpler, it’s just made everybody even more ambitious with what they do.

And the other big change is around distribution, and the fact that people can access sport. That has been extraordinary. With that, the way audiences consume media has been transformed. 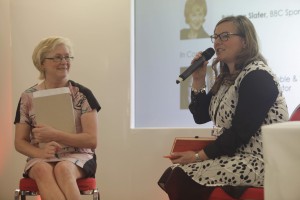 Just last weekend, the [BBC sport] website broke its all-time record. There was a while where London 2012 was the peak, but over the last few months there has been a steady increase on that, so that last weekend 8.6 million people in the UK, 12 million globally, accessed the site for some kind of content. Those are extraordinary numbers. What really drove [this change in consumption] was London 2012, because there was quite some uncertainty about what showing all that content would mean. Would it result in a very fragmented experience, or would audiences love the opportunity to choose their viewing experience?

Our conclusion was: the best of both worlds. People still came in enormous numbers for the blue ribbon moments, but at other times loved exploring other sports. So that at any time, all of the 24 different Olympic channels had over 100,000 people watching it. Extraordinary choice, and it gave people an appetite.

So the innovation in distribution is in that choice and accessibility, the way people consume — maybe we’ve seen more innovation there than the raw OB and event coverage.

In 2014, the BBC was responsible for 45% of sports viewing in the UK. Is this rising? And is it dependent on large sporting events?

There is a cycle. We tend to go up in an even year and slightly down in an odd year. But it’s usually between 45 and 50%. And it’s worth adding that of course there are a multitude of satellite channels, some running 24/7. BBC Sport is responsible for 3% of all television coverage of sport in the UK — but drives 45% of the viewership. That is one of the BBC’s USPs: if an event is on the BBC it can reach a much, much wider audience than if it sits behind behind a pay-wall.