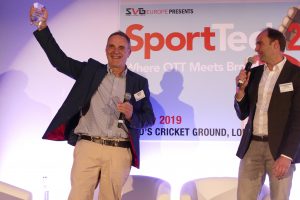 Kicking off SportTech, held in the Nursery Pavilion at Lord’s, SVG Europe chair, David Shield of IMG, announced he was standing down and handing over the reigns to Alessandro Reitano, vice president of sports production at Sky Deutschland. Reitano said on stage at SportTech that he was, “very pleased and honoured to succeed David”. 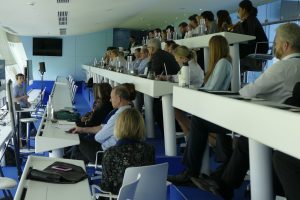 The Carbon Literacy Workshop in full flow at SportTech, Lord’s

The Carbon Literacy for Sports Production Workshop was a rollercoaster ride of emotions and inspiration for attendees. This took place in the morning, while members of the England cricket team including Tom Curran and Jofra Archer bowled a few bowls on the Nursery pitch for the cameras, ahead of the World Cup this summer. Those that had participated in the workshop said they were warned they would feel despondent by the midway point of the session, after being shown the scale and urgency of the carbon situation globally, but in the second half they were presented with solutions and shared best practice. Many stated they were geared up to get back to work and start working within their business to make changes.

With sports presenter, Abi Stephens, keeping things running smoothly as MC at SportTech, the sessions covered a broad range of topics, yet the overarching message by the end of the day from all the speakers was to focus on the fans viewing your content, to gain a true understanding of them, trust their demands and put them at the centre of everything you do. 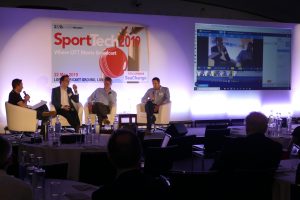 After networking drinks in the evening, the women’s event with 200 attendees, both female and male, kicked off with a panel from the BBC talking about the evolution of the broadcaster’s holistic approach to both men’s and women’s cricket and its plans for 2020 when its rights package with the ECB kicks off. Speakers were BBC Sport’s Dominique Middleton, head of production for radio, digital and cricket, Henry Moeran, BBC Sport Test Match Special producer, and Isabelle Westbury, sports broadcaster and former Middlesex Captain. 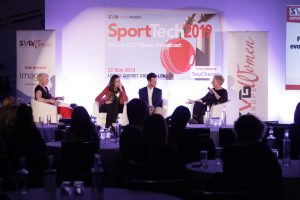 The second panel covered the trials, tribulations and great cooperation between the people behind this summer’s women’s cricket, Aoife Murphy, England and Wales Cricket Board broadcast and media operations manager, Jennie Blackmore, Sky Sports production executive for cricket, and Angela Gibbons, CTV Outside Broadcasts’ commercial manager. The evening concluding with more networking in the Nursery Pavilion and was a great success.