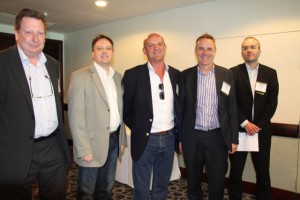 Production service providers based in the UK took to the stage at the SportTechUK Summit at Stamford Bridge to discuss a number of issues, including reflections on the Summer Olympics, the state of business in a typically quiet “odd” year, and future technologies like 4K.

Historically an odd-numbered year means a quieter time than an even-numbered year that will add events like the Olympics, World Cup, Euro Cup, and more to the agenda. But this summer the UK is hosting the Ashes, the Champions League Final and, as always, Wimbledon and The Open.

“2013 is shaping up to be an interesting year as non-sports events have suddenly showing an interest and are asking us to do strange shows from strange places,” says Brian Clark, NEP Visions, commercial and technical projects director. “And we have been busy for a bunch of other reasons, like picking up all of the racing coverage for Channel 4 and having a rather large flypack at the ESPN XGames in Brasil. We have probably had, from a Visions’ perspective, the busiest start to our year ever.”

David Shield, IMG Media, global director of engineering and technology, said that IMG Media has been quite lucky in 2013 as it has lost some business in the UK but also gained business. And the company is also in the midst of moving its UK technical facilities to a new location just north of Heathrow airport.

CTV OB will spend its summer at the center of Sky’s Ashes coverage as well as ESPN’s 55-camera unilateral production of The Open golf championship from Muirfield in Scotland, two events that are part of a challenging year and, during the weekend of July 18, an extremely challenging weekend as both the Ashes at Lords and The Open occur at the same time.

“We are all in engineering because we enjoy the challenge and I don’t know any year where is hasn’t been more challenging then this year,” said Hamish Greig, CTV OB, technical director. “At the same time [as The Open] will be cricket and the Ashes and there will be a lot of new innovations there. And it is already one of the most technologically challenging broadcasts with things like infrared cameras, Hawkeye, and other systems.”

For its part SIS LIVE will once again handle the BBC production needs and host feed needs for both The Open and Wimbledon.

“We’re touring around the world for that event and are not seeing any dip in business,” he added.

Looking ahead, looking back

All of the panellists said their companies are keeping a close watch on developments relative to 4K. Euro Media, parent company to CTV OB, for example, is looking to do a 4K multi-camera production later this summer.

“And 70% of our existing equipment is usable for 4K and that is a good start but we think if we went whole hog this year we would be a year early,” said Greig.

All agree that early work today in 4K productions will help make it easier to build a business around future 4K opportunities with clients.

“We have had a lot of cross-company conference calls about 4K and we need to invest in technologies so the productions can do what they want with 4K but it can only be driven by the needs of the broadcast companies,” added Clark.

Shield said that inevitably someone is going to do a 4K channel but in the meantime the industry will see more and more requests from production teams wanting to use 4K to cut out an HD-quality image for clear zooms and replays.

And while business in 2013 for the four companies on the panel seems to have exceeded expectations the panellists said their companies are still bumping up against budgets that are getting tighter, productions that are getting larger, and the simple fact that while they may be able to find more cost-effective kit for a production personnel costs don’t change and, in fact, are going up.

“Also we are constantly going up against health and safety issues and they have a huge impact on our working practices,” added Greig. “We can be trying to run a cable three meters from point A to point B but we will need to run it up 30 metres and then down 30 metres. So we need to find some give and take there rather than a hardline attitude.”

Those types of challenges are nothing new in the UK and were probably on best display (and for an entire world of broadcasters to experience) during the London Olympics last year. All were involved in that massive undertaking (working for clients like OBS, the BBC, NBC, and Channel 4) and, as Clark said, as a technical exercise it was phenomenal.

Added Jones: “The London Games were a great tribute to the British broadcasting community. And all of us at one time would be in the same compounds, helping each other out. And that is just a part of being in our industry.”