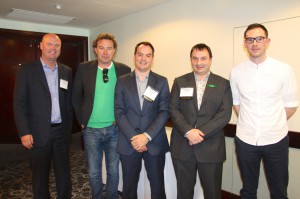 The much-discussed second screen era has truly arrived, with more and more sports content being pushed towards viewers via websites, phones and tablet devices. What hasn’t become clear is quite how best to optimise this content for both creative and financial advantage. Hence, our distinguished line-up of panellists had plenty to discuss when they gathered to reflect on the second screen experience at SVG’s SportTech event, which was held in London on 24 April.

Sam Usher, managing editor of niche-sports oriented RedHanded TV, explained that much of his business already derived from generating second screen content. But with an increasing number of events requiring live coverage, RedHanded has had cause to explore other workflows – a process that led to the utilisation of NewTek’sTriCaster for recent sailing coverage, “which worked out brilliantly”.

Petro Mnych, production manager for Arsenal Broadband, remarked that the one thing his team couldn’t do is “show the live game because we don’t have the rights to do that, so the second screen environment – although it has not evolved into anything fixed – is where we will live for now. We are concentrated on looking at other content, finding platforms that support what the broadcasters are doing.” By way of example, he points to Arsenal World, which is available on iTunes, as a wealth of in-depth player interviews shot with great editorial consistency.

John Nemeth, VP sales EMEA of software encoder develper Elemental Technologies, enthused about the arrival of the multiscreen era. “All kinds of interesting things are going on in the industry about cleaning up the main feed and giving people a better experience there; putting [other content] on ancillary devices, and so on,” he said. “Everyone wants ROI, so there is a lot of thought being given to how to get people engaged and ensure they watch the ads.”

David Gibbs, director of digital media of Sky Sports, said that the primary focus for his team was “to improve and enhance the viewers experience” involving and away from the main screen, and that a lot of time was necessarily spent on “keeping on top of new platforms”.So the SkyGo service, for example, went first to PC,then iPhone, then iPad. As for Android, Gibbs says that they have had “to target devices that people are using, and which are compatible with the security issues of rightsholders.”

Looking at the second-screen over the long-term, Usher called for the development of “more character features” that would use the new opportunities “to look at different [types of content]. More budget is becoming available for the niche elements. They are small amounts, but there are more of them.”

Mnych urged a close watch to be kept on production quality, and said that service providers and broadcasters also needed to bear in mind the changing web environment in which “lots of players are developing their own online entities, set up by outside organisations.”

Gibbs closed by saying there needed to be “faith in the content and the way that we can package that up to a customer. [They need to know] that whatever sport [it might be] they can come to us; they don’t need to go to a multitude of providers or YouTube or whatever else.”