SportTech UK 2013: predicting the when, where and how of 4K 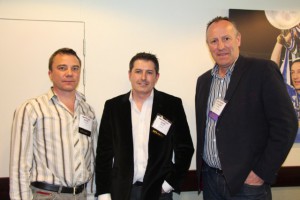 4K is the talk of the industry, but when exactly is it likely to become a commercial reality? This was just one of several crucial questions addressed by an all-star panel at the 2013 SportTech UK event, held at Stamford Bridge Stadium, London, on 24 April.

John Dollin, applied research manager at BSkyB, observed that there was a confusion of terminology, and suggested that it might be more helpful for consumers to use ‘Ultra-HD’ as opposed to 4K. He also urged caution about the emerging technology, remarking that “we have to be careful not to overhype the ability of 4K until we understand all the problems and challenges we have to solve”. Nonetheless, he is encouraged by the increasing availability of different screen sizes for 4K and discerns the early stages of “a price between manufacturers competing for market share”.

As for 4K’s specific benefits for sports, Dollin said that there was undoubtedly great potential for “‘wow’ moments, including crowdshots and the bigger sort of scenes that are really worth the extra pixels.” The challenge comes, he suggested, “where footballers move around the field – as they do –and you can lose a bit of resolution”.

Duncan Humphreys, creative director, CAN Communicate, provided some historical perspective with the observation that 4K was “originally brought about, and designed to be a cinematic format, with cameras that are designed to do drama and be integrated into smaller packages that can deliver documentaries at a very competitive price point.”

As a live tool, however, he still harbours “certain reservations” about some current market claims. “We still don’t know if live 4K broadcast from capture [to transmission] is getting anywhere… [Some people] are talking about it as if it’s happening already, which is not the case as far as I am aware.”

Mark Grinyer, head of sports business development for Sony Professional Europe, highlighted the increasing accessibility of 4K camera technology, such as Sony’s own F55. But there was a major issue still to be negotiated in terms of storage and archiving: “There is no bulk slo mo recorder at the moment.”

Moving forward, Grinyer said that the completion of the proposed HMDI 2.0 standard “would be very helpful”. Humphreys, meanwhile, urged general industry patience as the 4K landscape continues to materialise: “It’s an evolution; we are on a journey. But we must ensure that the quality remains good.”