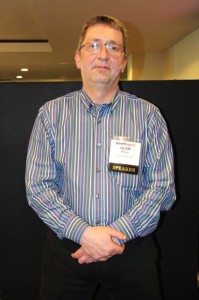 Alan March of Sennheiser gave SportTech UK attendees an update on the current state of wireless spectrum in the UK.

The one-day SportTech business conference might have been dominated by discussion of visually-oriented topics, such as 4K and second screen, but it still found time for an illuminating – and frankly somewhat alarming – update on the impact of RF spectrum reallocation on wireless system users from Alan March, Sennheiser UK business development specialist.

In a fact-packed presentation, March pointed out that the history of spectrum management spanned more than 100 years, with regulators and governments gradually coming ‘round to the idea of a market-based approach to spectrum from the 1960s onwards. More recently, spectrum reallocation has geared up dramatically, with “the release of spectrum over the last ten years being driven by mobile operators, who have recognised it as a resource [around which] they can base their growth.”

As well as faciliating IMT projects, these developments have proven highly beneficial for government coffers; the UK 3G auction in 2000 netted £22.5bn for HM Treasury. With spectrum sell-off intensifying, some of the theorising around usage has become increasingly ambitious, with Professor Martin Cave among those making a case for possible secondary spectrum trading.

Most recently, UK PMSE (progamme making & special events) users have had to cope with the fall-out of 800MHz spectrum reallocation – although a funding scheme for replacement equipment, resulting from extensive campaigning by the BEIRG Pro User Group, among others, did help to alleviate the cost pressures.

Now there are calls for a detailed assessment of how the 700MHz band might be redeployed. “Lots of people are relying on 700MHz, and unless we put up a spirited defence we could lose that as well,” warned March. UK comms regulator Ofcom, he said, is “currently calling for input…so please input!”

There is also a potential threat from a new generation of ‘white space’ devices that would operate in the interleaved spectrum on an unlicensed basis, with reference to an as-yet undesigned central database. “There is huge interference potential with these devices if we don’t think very carefully about how they operate,” said March.

In closing, March highlighted the ongoing cost of lobbying organised by the likes of BEIRG, and asked manufacturers and broadcasters to consider donating to these efforts. He also stressed the necessity for users to license their systems. “We need to be able to demonstrate just how heavy the usage is,” he said. “The more people license [for PMSE], the less spectrum will be seen to be available for mobile.”