IBC begins today, and the SVG Europe and SVG editorial teams are chasing down the hottest stories from all over Rai Amsterdam. To make the onslaught of announcements easily digestible by our readers, SVG Europe is sending you SportsTechBuzz at IBC 2019 daily, with all the top stories assembled into an easy-to-read blog from our reporters. 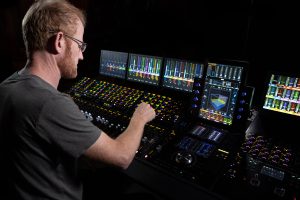 Avid (7.B55) is showcasing production and postproduction workflow solutions for video- and audio-content creators. For the audio community, the new Avid S4 and Avid S1 control surfaces provide integrated, powerful yet affordable sound-mixing solutions ideal for smaller broadcasters. Making its European debut at IBC 2019, Pro Tools Ultimate delivers 50% more voice/audio tracks than previous versions. In addition to the increase in base voice limit to 384, Pro Tools | Ultimate software and HD Native customers can further increase the number of available voices to 768 per system — on par with a three-card Pro Tools | HDX system — with the addition of Pro Tools | Ultimate Voice Packs. “Today’s content creators must contend with new formats, higher resolutions, ever-tightening budgets, and broader distribution realities, so media-creation and -distribution tools must work harder than ever,” says Avid CEO/President Jeff Rosica. “At IBC, we look forward to demonstrating how, with Avid, our customers can deliver more content and create at the speed of inspiration.”

Canon’s (12.D60) big news is the CJ15ex4.3B, the latest addition to its UHDxs series of high-end portable zoom lenses for 4K broadcast cameras with 2/3-in. sensors. “Wide angle is important to the industry, especially to the sporting world,” says Larry Thorpe, senior fellow, Canon U.S.A. “The weight of the lens is only 4.8 lb., so it can be mounted on jibs and drones. And a very special effort was made on HDR and the wide color gamut front with multi-layer coatings on the elements and a new Air Sphere Coating (ASC) that is ultra-low-reflective.”

With more than 400 large-scale IP system installations based on its Software Defined Video Networking (SDVN), Evertz (1.D31) is showcasing tools that take advantage of an IP-based infrastructure to provide new efficient workflows for production and playout. These include Evertz’s MAGNUM IP orchestration, customizable UI, and Scorpion media-processing platform. Evertz is also showcasing the DreamCatcher BRAVO collaborative production system, which debuted in April at the NAB 2019.

IBC 2019 is not only about IP for Evertz (1.D31), however. The company is expanding its portfolio of 12G-SDI solutions with an eye on the move to UHD and HDR. It is introducing the EQXUHD-10, the first enterprise-class 12G-SDI router, and SCORPION now has 12G-SDI support for mini I/O modules. Evertz is also introducing the EVMV-25G-2XQSFP integrated multiviewer, which supports 32 inputs of processing (using ST 2110) and up to four UHD outputs over a 25GbE interface. In addition, the company is announcing support for new BBC HLG v1.3 LUTs for HDR on some of its conversion products.

Innovative design and the latest technologies are the driving force behind new production and storytelling solutions showcased by EVS (8.A96). Its new Overcam AI-driven autonomous camera system enables rights owners and holders to create more-affordable immersive productions by economically capturing the action from more camera angles. Attendees can also discover how EVS’s ingest solution combines the XS-NEO server and IPD-VIA Ingest app to provide fast, simple ingest with concurrent support of multiple formats, codecs, and frame rates. The latest version of the Dyvi switcher is on display, along with the XT-VIA live-production server, which recently passed the Joint Task Force for Networked Media (JTNM) testing for IP interoperability. This testing proves interoperability not only of AV flows (SMPTE ST 2110) but also for configuration and management between different network endpoints. 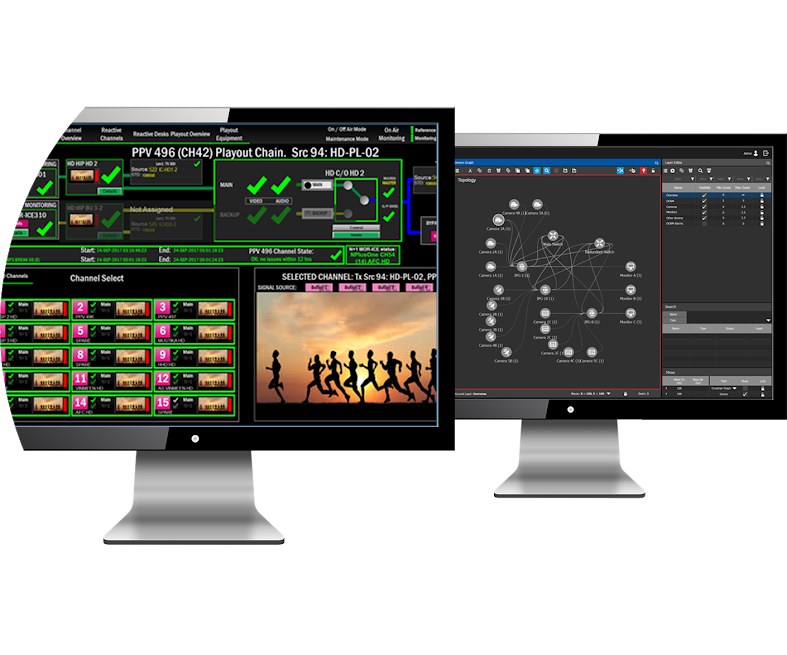 Grass Valley (9.A01) is debuting the GV Orbit unified IP configuration, control, and monitoring system. The consolidated software solution is specifically structured for the dynamic orchestration of broadcast media networks, whether SDI, hybrid, or pure IP. GV Orbit comprises one integrated package delivering an extensive diagnostic toolset for handling everything from multiviewers to routing control and monitoring via a single interface. Users can easily add or remove devices, change control surfaces, or rename signals, panels, and workflow indicators on the fly. GV Orbit is architected to sit on Distributed Data Services (or DDS real-time middleware) and autonomously recognizes and displays any new device on a network, with all device parameters immediately accessible.

In other Grass Valley (9.A01) news, European facilities and services provider Euro Media Group has standardized on the GV K-Frame X production switcher ahead of major sports productions in 2020. The switchers will be deployed across several EMG-owned companies, including Videohouse (Belgium), CTV (UK), United (the Netherlands), and Euromedia (France). 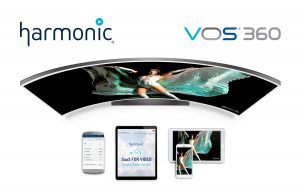 Harmonic (1.B20) has added a new delivery capability for its VOS cloud-native offerings, providing telco, cable, and mobile operators with real-time scalability for mission-critical, high-demand live-video–streaming services. This new SaaS offering, which Harmonic says requires no upfront investment, has been deployed by a leading mobile-network operator to deliver live sports content. Operated as a fully managed service, this expanded video-delivery functionality uses a single control platform and a multi-tiered, multi-CDN approach leveraging established partnerships with third-party CDNs and video-delivery nodes deployed by Harmonic.

Lawo (Stand 8.B50) is launching the world’s first AES67 stream-monitoring software, for Windows PC. AES67 Stream Monitor displays detailed information for as many as 16 user-definable audio streams, each of which can contain multiple audio channels. The main display presents audio levels and alarm indications at a glance for all monitored streams; selecting an individual stream display allows the user to do a “deep dive” to discover detailed stream information. “Radio professionals have embraced AoIP. The majority of new facilities are based upon IP technology,” says Lawo Radio Marketing Specialist Clark Novak. “Broadcasters are also vocal about their support for the AES67 standard. But they’ve had no easy way to inspect and monitor critical audio streams. AES67 Stream Monitor addresses this issue and fills their need.”

NEP (14.H02) is highlighting its new iOB (or Intelligent OB), which will also be in the outside exhibits area. The iOB, a complete and very comfortable mobile PCR for directors and editors, can be placed at almost every conceivable event location where there is connectivity. With a ﬁber-optic connection, it is directly connected to one of NEP’s data centers, where all technology is centralized but can be controlled from the iOB. It is a mobile production-control room with only remote controls for switching and other operating positions; shading and audio are handled from one of NEP’s central control rooms. The iOB is the most recent innovation (in addition to the iFlyPack) within NEP The Netherlands’ Centralized Production Platform and is being used for the ﬁrst time during IBC 2019. The iOB captures the demo signals and distributes the program feed (including AR) to NEP’s MCR in Hilversum, where the content will be live-ingested and forwarded to Mediabank.

Q5X (8.B02) is featuring its signature on-person wireless systems, including the new QT-5100 RefMic with integrated rocker-style mute switch, which was introduced at last December’s SVG Summit and has been rolled out to all 31 NHL arenas and used in all NHL games. Also new since IBC 2018 are Q5X QR-3200 dual-channel wideband rackmount receivers and QR-M3 wideband mobile receivers, which can be tuned between 470 and 698 MHz. According to Q5X CEO Paul Johnson, a number of teams have purchased their own Q5X PlayerMic kits to create content for team websites. “We have sold many systems this year directly to teams for the NBA, NHL, MLS, MLB and NFL,” he says, noting a shift from the rentals that many leagues and teams used during initial evaluation periods.

Sennheiser (8.D50) is showing its wide range of wireless microphone systems, including the XSW-D, AVX, evolution wireless, and Digital 6000 and Digital 9000 systems. These provide high-quality wireless transmission in various frequency ranges: 2.4 GHz, 1.9 GHz, and UHF. In the AMBEO immersive-audio area, two full end-to-end workflows for multichannel and Ambisonics productions are being displayed. Within the framework of the AMBEO for VR partnership program, Solid State Logic is showcasing a live immersive television mix recorded with the Sennheiser AMBEO VR Mic and various spot microphones. Live workflow demos of decoding and mixing operations will take place at the SSL booth (8.D83) at 4 p.m. every day.

Shure (8.B35) is introduced its line of TwinPlex premium subminiature (5 mm) omnidirectional lavalier and headset microphones. Comprising four lavaliers (TL45, TL46, TL47, TL48) and an ultra-light, fully adjustable headset mic (TH53), the TwinPlex products feature dual-diaphragm omnidirectional design, which creates excellent off-axis consistency and low self-noise characteristics. A1 Dave Grundtvig has tested the TwinPlex microphone extensively in sports settings and notes that he has used in NFL, NBA, and MLB games and The Masters golf: “And it has performed fantastically.” Shure is also showcasing the MV88+ video kit, Axient digital wireless system, and other products.

Sony’s IBC stand (13.A10), is always swimming in new technology, and one of the big intros this year is the PXW-Z750 camcorder, the first to bring three–2/3-in.–chip CMOS sensor performance to the 4K realm. It has global shutter, a first for a camcorder of its kind, and also supports S-Log3/HLG and deploys BT.2020 and BT.709 colour space. And, with SR Live, it can record 4K HDR and HD HDR simultaneously and XDCAM air, enabling users to stream straight from the field.

The Telos Alliance (8.D47) will introduce its SDI AoIP Node, which features two independent 3-Gbps HD/SD-SDI inputs and outputs. Up to eight audio pairs from either or both SDI inputs can be de-embedded and converted to AES67, becoming available as network sources for monitoring, distribution, or loudness control via the Linear Acoustic AERO.8000 Processing Engine. Up to eight audio pairs of the networked audio can then be re-embedded (and pair-shuffled if desired) back into two independent SDI outputs. “Radio broadcasters caught on to the nearly endless benefits of networked audio nearly two decades ago and haven’t looked back since,” says John Schur, president, Telos Alliance TV Solutions Group. “Television is now on the same path, aided by emerging standards.”