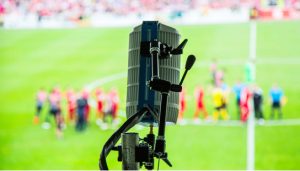 Sporttotal.tv promises to bring a variety of amateur soccer action to German viewers

By rebranding wige MEDIA as sporttotal, the German company is emphasising the clear focus on its future business model. The new platform sporttotal.tv is transmitting live matches of amateur football matches all across Germany, which will give the Cologne-based broadcast production company a major boost.

The basis for this new business area is a special video technology that consists of a box with four cameras that automatically scan the action on the pitch whilst generating a 180-degree image. The software’s algorithm is defined in such a way that the cameras can scan, pan and zoom the action according to the swarming behaviour and ball movements on the pitch. By automatically producing high-quality images, the innovative system provides amateur clubs with an affordable solution for the live transmission of their soccer matches. Thanks to this camera system, fans as well as competitors can watch the live stream of an amateur match whenever they are unable to make it to the stadium.

In 2016, wige MEDIA and the German Football Association (DFB) agreed to examine the possibilities for a partnership in this field. In the first place, wige MEDIA installed the pilot system in the Bavarian leagues north and south as well as in the fourth division of Lower-Saxony during the second leg of the 2017 season. Due to the successful results during the pilot period, the company entered a framework contract with the DFB for the next ten years. The aim is to equip soccer clubs of the fourth highest league and downwards with this video technology that allows high-quality and fully automated live transmissions of soccer matches via the online platform. As a result, sporttotal.tv will be established as the video platform for amateur soccer all across Germany.

“We do this to enable high-quality, efficient and cost-effective production in amateur sports. At the same time, we like to combine this idea with significantly more options for fans,” stresses Peter Lauterbach, CEO, sporttotal. “Now they can follow matches live or on demand much more individually and flexible than on classic linear TV.”

Soccer fans can watch the matches of their favourite teams via web TV free of charges. Furthermore, the viewer will also be able to change the perspective in order to follow their favoured soccer player. “[In particular] young football players communicate through social networks. Now they are able to post and share video sequences of their own team and home club games,” underlines Rainer Koch, first DFB vice president amateurs. “By streaming the games live we also expect an additional revaluation. Eventually everybody will be able to see how attractive amateur football can be.”

sporttotal.tv funds its activities through ad-free premium subscriptions and advertising. Potential advertising partners are showing strong interest in sporttotal.tv. Hyundai already came as an automobile partner onboard and sealed a longterm partnership with sporttotal.tv. Among the founding partners a renowned German companies such as Allianz, German Post and Telekom, as well as BILD as media partner. The German Post bank is supporting the venture with a credit contract up to €2.5m with a three percent interest rate.

Wige MEDIA will also get fresh cash by selling its Munich-based production outfit Wige South&Browse for an expected €700,000 to All3Media, a joint venture of Liberty Global and Discovery Communications. The transaction still requires the greenlight of the cartel authorities and is supposed to take place in the second half of 2017. Focused on factual entertainment and docutainment, the independent company is developing and producing prime-time content for public and private broadcasters in Germany. The company’s activities also include a post-production facility for visual effects.

Consequently, following its new philosophy, sporttotal.tv continues its course by disposing their investment in the Sport Media Group that operates the Internet platforms Motorsport-Total.com and Formel1.com, which each have millions of visits and page impressions every month. sporttotal.tv is going to sell their 51 percent share of the Sport Media Group for the amount of €2.45m to Miami-based Motorsport Network, which already operates various sports platforms.

The divestment is another step towards the company’s concentration on the fast scalable digital business with sporttotal.tv, venues such as infrastructure projects for sports facilities, as well as licence marketing of live events and content marketing.