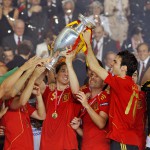 Euro 2012 football fever has yet to hit the continent but Spring Media and Matchworld Group will be doing their part by producing TV coverage of Spain’s 10-day training camp that runs from 22-29 May in Schruns, Austria and includes two matches. Thirty broadcasters around the globe have signed on to carry the coverage of the matches, with the first match on 26 May against Serbia in St. Gallen, Switzerland and the second on 30 May against South Korea in Bern, Switzerland.

Matchworld Group is the organizer of the training camp and matches and Spring Media, the TV sports agency launched last May, is the exclusive media partner for production and distribution. Matches, training sessions, interviews, press conferences, daily highlights and news stories will all be produced by Spring Media and distributed to media companies worldwide.

Torsten Billing, Spring Media onsite coordinator, says the training camp will be covered by a six man crew while the two matches will have crews of more than 20 for the HD productions that will have a minimum of 12 cameras, super-slo mo, and three EVS instant replay servers.

“The training sessions can be intriguing and there will be many spectators at the training sessions,” he says. “Our aim is to be a ‘fly on the wall’ covering the preparations as they happen without the team noticing or being affected by our coverage.”

The events conclude a busy first year for Spring Media as it distributed more than 150 individual events.

“For the vast majority of events we don’t hire the OB as the event organizer hires the production crew and we access the international signal,” explains Billing. “We only produced about 10 events ourselves in 2011.”

“We want to continue to deliver high-quality events to our broadcast partners,” says Billing. “And in order to maximize the value and have full quality control we prefer to look after the full production and delivery chain.”