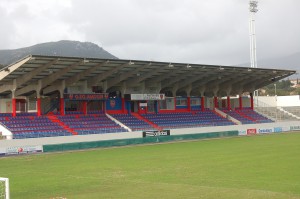 Systems integration company Atacc International worked with French Technomad dealer Audiopole to develop the new system, ensuring intelligible voice and music is audible throughout the stands. The design also considered financial and structural challenges, including minimal hanging points for the latter. But the challenge of protecting gear in the open stadium air was top of mind for both companies.

“Our main concern was undoubtedly the weather, and Technomad loudspeakers are 100 percent weatherproof,” says Alain Castelli, manager, Atacc International. “They can withstand wind, rain, moisture and temperatures as cold as 0 degrees Celsius in the winter; and as hot as 30 degrees Celsius in the summer.  The sea is also nearby, so salt corrosion was another concern.”

Audiopole provided an acoustic study of the stadium prior to installing the seven Technomad Noho loudspeakers in the stands, behind the goals, and within a VIP space and visitors area. The study determined that the Noho was the best model for the project, providing excellent coverage and full-range audio — including ideal sensitivity for speech. The complete system includes Yamaha amplifiers and mixers, a Shure ULX Series microphone, and an automated playout system for security announcements.

“This was our first time using Technomad, and we are very pleased,” adds Castelli. “The observed power of the Nohos in comparison to their size is very impressive, and the responsiveness from Audiopole was also excellent.”